Dogs have long history of being exploited in cruel experiments under that banner of scientific advancement. This week Cruelty Free International launched a new campaign aimed at bringing the issue back into public awareness and, ultimately, ending the practice once and for all. As the old saying goes, "You don't know where you're going until you know where you've been." With this in mind, here is a brief historical overview of challenges to the use of dogs in experiments.

The start of using dogs as research subjects can probably be attributed largely to French philosopher Rene Descartes [1596 -1650] who promoted the view that all animals were soulless machines, devoid of thought or feeling. Descartes wrote, "If you cut off the end of the heart of a living dog, and through the incision put your finger into one of the concavities, you will clearly feel that every time the heart shortens, it presses your finger, and it stops every time it lengthens." Descartes' theory helped bolster and justify experiments on living dogs [and other animals] for years to come.

1800s - Use of dogs in experiments begins to be challenged in Europe.

It wasn't until mid-1800 that experiments on live animals were seriously challenged. The 1858 Charles Darwin book, On the Origin of Species and the general acceptance of evolution by the scientific community provided support for what many people already felt intuitively; that animals were more than mere machines and could experience pain and distress.

In 1863, Frances Power Cobbe, a leading women's rights campaigner and acquaintance of Charles Darwin, became aware of the suffering of animals in experiments traveling around Europe. She began to write articles and speak at public meetings advocating for an end to the suffering of animals in cruel experiments. She later founded the "British Union for the Abolition of Vivisection" (BUAV) -- now Cruelty Free International. Due in part to Cobbe's efforts, in 1875, a Royal Commission in the English parliament was appointed to review the subject. One of the members of this Royal Commission was Richard Holt Hutton who argued vehemently that cats and dogs should be kept out of the laboratory. He wrote, "The humble friends of man, which have been taught to obey and trust him, should not be selected as the victims." The Royal Commission's findings led to the passage of the UK's Cruelty to Animals Act in 1876 that instituted a licensing system for animal experiments.

1900s - Debate continues in Europe and is sparked in the US 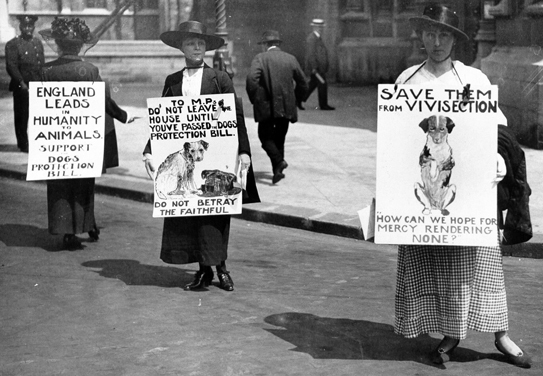 Unfortunately, the Cruelty to Animals Act was too weak to significantly reduce suffering or the number of animals used in experiments. Between 1902 and 1910 the debate raged on in Europe culminating in "The Brown Dog Affair," when a brown terrier was subjected to horrific experiments and passed between researchers for two months before finally being killed with a knife through the heart.

During this same time in the U.S. an insidious practice known as "pound seizure" was growing. Pound seizure involves taking animals from publicly funded animal shelters to be used in laboratory experiments. By 1948 the biomedical industry had begun pushing legislation to legally require animal shelters to provide shelter dogs and cats to research institutions either directly or via dealers who served as brokers collecting dogs and cats from several sources for sale to laboratories.

It wasn't until 1965 that the use of dogs in experiments reached a high level of public awareness and concern in the U.S., when a Dalmatian named Pepper was stolen from her backyard in Pennsylvania and sold into research by an animal dealer. Despite efforts by her family to track down and retrieve her, Pepper died in a laboratory experiment less than a month after being stolen. Pepper's story gained national attention. Then in 1966, Life magazine published an exposé titled Concentration Camps for Dogs detailing the inhumane treatment of dogs at the hands of dog dealers, and chronicling individual stories of dogs who had been stolen from their homes and sold to laboratories. The article resulted in tens of thousands of letters to Congress, reportedly surpassing the number of letters received about the Vietnam War.

Today, most dogs used in laboratory experiments in the UK and U.S. have been bred in facilities in the business of supplying dogs for experiments. But this doesn't make them better off than dogs collected from pounds or stolen from homes by dealers. Many facility bred dogs will never see the sky, breath fresh air or feel grass beneath their feet. Instead they will be forced to spend their lives inside a laboratory, used in painful tests from which death may be their only escape. 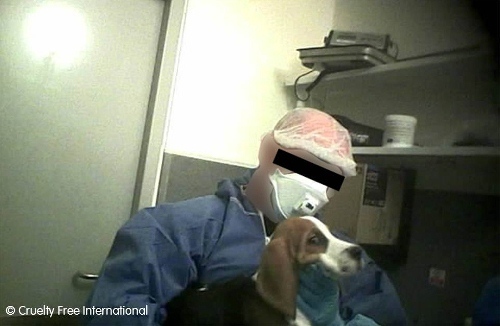 Whether born and raised in a loving home, or born into a sterile kennel devoid of a human family, dogs sold for research are not protected by the same laws as the dogs so many of us share our homes with. Instead, animal researchers carry out animal testing causing suffering and harm to the dogs forced to live -- and die -- in laboratories. A recent investigation by Cruelty Free International revealed puppies as young as 4 weeks to 6 months old being used in experiments and killed. 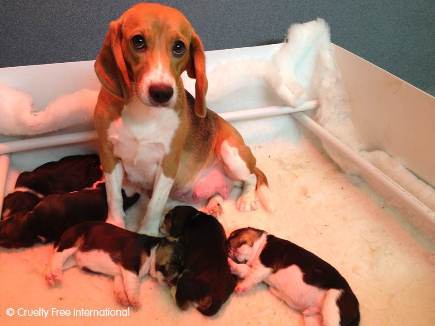 It doesn't have to be this way.

In 2013, a ground-breaking scientific study carried out by Cruelty Free International and FRAME showed that the use of dogs in experiments is not scientifically justifiable. Data from 2,366 publicly-available dog experiments found that the prediction success was little better than tossing a coin. This is because, dogs react differently to humans given the same drugs. But, there are reliable and effective methods that do not use dogs,including cell, organ and tissue cultures, 'Organ-on-a-chip', micro dosing and computer models and programs which can predict the toxicity of new chemicals or drugs.

Many lessons have been learned from over 100 years of evolving science, changing public opinion and important (although imperfect) legislation. Today nobody subscribes to Descartes' theory that animals are machines and therefore justifiably excluded from moral consideration. Indeed there is a growing concern about the use of animals in research. A 2015 Gallup opinion poll in the US found that 67% of respondents said they are "concerned" about the use of animals in experiments, with 33% saying they are "very concerned".

Coupled with the growing evidence that animal experiments are unreliable, we now have the scientific and ethical arguments on our side to advocate an end to the use of dogs in experiments once and for all.