One day it comes to a halt. My phone rings -- which always freaks me out. I think my phone is only a camera or a way to demand a car. I look at the screen and the name seems kinda familiar... Ah! It's my literary agent. I believe I speak for all writers when I say that when your agent call s-- wait, that never happens, so never mind....

I answer as if a Scooby Doo goblin might jump out.

"I have a new tactic to get you out of your book contract," she says.

I'm a former U.S. Marine and wrote a book, The Pink Marine -- we both hated my publisher. He was like dating a nerdy psycho. You know how a normal professional relationship starts out all sweet and flirty? They dangle the contract like the key to their heart. You unlock the door, walk into the kitchen, and find that your fabulous homemade pot roast of a manuscript has been transformed into the family bunny on full boil. So my agent tried to kill my contract, but the publisher just kept leaping out of the bathtub with a kitchen knife.

"What's all that beeping?" my agent asked.

I looked around to see which of the five machines or forty wires was the cause.

"What?!" she asked with more than 15 percent concern.

Well, last night everything started swirling. I had scallops for dinner and thought maybe I'd had bad scallops.

Then an invisible bowling ball hit my invincible chest HARD, my left shoulder suddenly hurt worse than the punch from firing an M-16. My arm went numb. And I thought, ugh -- am I having a heart attack?!

"That fucking publisher!" said my agent.

And I was alone -- I didn't even have a cat to lick me for a month until my body was found. My boyfriend had flown out of LAX just a few hours before. We had agreed that the next day I would be hiring a lawyer to cancel the book contract. He also told me that perhaps it was time I got a job. Between you and me, I think that last part contributed to the heart attack.

I was losing control of my hands. Everything got blurry.

I felt like I was back in the Marine Corps, force-marching through mud, carrying a 70-pound pack. Bug-eyed, I went into Marine mode -- adapt and conquer. I'd heard you take an aspirin, so I ran upstairs to grab one. I stopped midway and thought, "Should I be exerting myself during a heart attack?"

I leaned against a wall. This meant I wasn't going to see my boyfriend, or my niece's new baby -- plus I'd just paid Amex. Is this how my story ends, I thought -- debt free, with a full head of hair?

I took the aspirin. The main attack passed. I lay down. I was in pain, disoriented, and sweaty. I never sweat.

Actually, I called my personal 911. My childhood best friend -- who's now a doctor. He freaked like a friend, but issued a medical opinion that I probably did have an attack -- yet I sounded so good, it was up to me if I went to the hospital right away to get the necessary blood test. Within thirty minutes I'd comforted him enough to agree that I'd go in the morning. Like there's always a next morning.

It was not an easy sleep. I thought lots of thoughts I shouldn't have thought. What if I lived and Food Network found out? They won't let me eat pie on TV anymore. What if I died? All the faces I'd never see. During that call last night I hadn't taken the opportunity to thank my best-friend-slash-doctor for our 40 years together. I refused to believe that my life could be over. I was terrified.

The next morning -- whew. I took a shower, blow-dried my hair, pulled on clean underwear -- and called my insurance company to verify coverage. I'd never used it.

I drove myself to UCLA and checked in with the casualness of arriving at a Hilton. I almost, this close, told the receptionist I was there due to an erection lasting more than 4 hours. Truth is, I felt pretty good.

Yet my heart rate was double the speed of a normal man's. Doctors flew at me with the same rapidity. I told them perhaps I have two hearts. Maybe there's a sycophantic twin inside me that my body didn't eat during our gestation period.

Tests confirmed that I'd indeed had a heart attack, with the troponin measuring 15.8 on their ticker scale, which translates to massive. I like to save that word for ego and bank accounts.

"So," the agent asked, "Want to hear my contract-cancelling idea?"

Now that's an agent. As the doctor wheeled me into surgery, he said, "Get rid of the stress factors in your life." From my phone, I shot an email to the publisher: "Contract just got cancelled, bitch."

I was awake as the surgeon injected dye into my heart. I thanked him for finally making me an actual blue blood. They found the blockages, they put in three stents. I'm lucky.

I asked if I could fly to Dallas that Saturday: the next stop on my book tour. The doctor stared at me. "Um, that's tomorrow, so -- no. Maybe this is why you're here. You have to wait a week to fly -- and six weeks for sex."

I tried to reason with him, man-to-man.

"Look Doc, in a few years I won't be able to have sex. So I can't waste the time when I can still do it. And when I can do it -- I'll be too afraid to do it at home alone, so can I do it here in your office? Not with you in the room. Just give me some kind of buzzer to hold in my other hand that I can punch if I need medical assistance."

I went home a few days later. I rested, relaxed, and relished in the one amazing side effect of this: I hear I love you -- a lot. I'm eating more vegan; soon I'll be all withery like Bill Clinton.

My book? Hello, I'm a Marine. I formed my own publishing imprint, and called my rep at Ingram to distribute. I resumed my tour.

That other milestone finally arrived -- the day I got cleared to have sex. I decided to go it alone. It might look like a murder scene to the cops if I died mid -- in flagrante -- and that would be so difficult on my boyfriend. Not a multi-tasker. He can't mourn and do hard time.

I'll set the scene. I'm downstairs, in the living room, on the couch, middle of the day. My cell phone is next to me. For a phone call, not a photo. Nitroglycerine not merely nearby. Just in case I need one quickly, I open the bottle and spill out a few tiny white pearl tablets, like sub textual semen.

I'm fully dressed: shirt, jacket, shoes. Look, I'm not going out like David Carradine. I open my pants, ease my underwear down barely to pervert-in-a-movie-theater level -- and begin. I use my USMC field combat training and limit my arm and hand motion, exerting only the smallest effort in the "jacking," saving everything necessary for the "off." 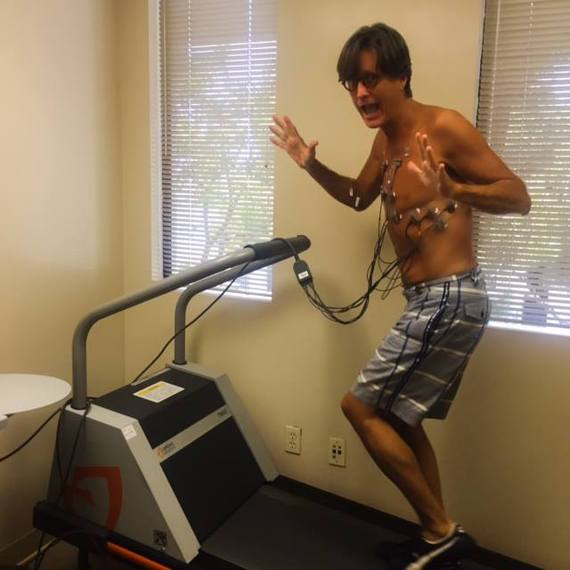 By now I guess the moral of this story is pretty obvious. If you think you're having a heart attack, don't pretend that you're not -- don't hesitate to seek help immediately, emergency rooms won't turn you away. And chew the aspirin.