My sophomore year of college I shared an "apartment-style" dorm with my best friend Katy and three other girls. We had a kitchen, a living room, two bathrooms, and our own teeny-tiny bedrooms that were only wide enough to fit a twin bed. Like most college students, we decorated our rooms with things that mattered to us and expressed who we were. My favorite decoration was the one on the outside of my bedroom door, a black-and-white poster of Martin Luther King Jr. delivering, "I Have a Dream."

A couple of my roommates laughed at me when I put the poster up, and more than one visitor to our dorm commented, upon seeing me for the first time, "Oh, I thought you were black."

I'm not black. I'm mostly white. But that hasn't stopped me from being captivated by the civil rights movement. Captivated isn't the right word, but I don't know if there is a right word to express how I feel about the civil rights movement -- a word that expresses at the same time horror, awe, shame, anger, and a desire to travel back 50 years so that I could march alongside those who stood up against hate.

While I've never been the kind of person who takes a special interest in history, I am the kind of person who thinks there's immense value in not sugarcoating it. The civil rights movement was something I learned about in school, and yet never felt like I was truly educated enough on. Like the first time you read about the Holocaust, or slavery, or Hiroshima, The civil rights movement taught me both about the depths of evil man is capable of, and the power in ordinary people standing up for justice.

That's one reason I was so excited to see the latest exhibit at Jacksonville's Cummer Museum and Gardens, on loan from the High Museum of Art -- "A Commemoration of the Civil Rights Movement."

The exhibit was small, and took up only a single room towards the end of the museum. The commemoration was comprised solely of black-and-white photographs, most only slightly larger than 5X8, taken from the civil rights era. There were many iconic pictures among the collection; Rosa Parks being fingerprinted by the police, Martin Luther King Jr. getting arrested at a lunch counter, two separate "white" and "colored" water fountains, and so on.

Unlike the other larger, more open rooms in the museum, this one was intimate. Small lights illuminated each photo, which were spaced evenly at eye level on the walls. Because of the subject and lighting, the room took on a hushed, reverent atmosphere. The handful of people in the room with my husband Ryan and me were whispering, or silent. All except one woman, and her son.

"Did you read that?" the mother said, the frustration in her voice making me look up. She was a heavy-set black woman in a long sundress, probably eight years older than me.

"Yeah," her son mumbled, clutching her hand. He saw me looking over and ducked behind her shyly. He was probably 11 or 12, still young enough that his chubbiness was endearing.

"Then what did it say?" she asked, a sharper edge in her voice this time. She saw me looking and gave me an exasperated, "kids these days," shake of her head.

Her son pushed his glasses up on his nose and leaned into the photograph. "It says they were freedom fighters."

"And what year was that?" she asked.

"No," his mother said, "It wasn't. That's when Maymay was growing up."

We were right next to each other now, at side-by-side photographs, and I fought back the urge to say something stupid like, "I'm so sorry." I just smiled at the boy like I usually smile at kids embarrassed by their parents, and moved along.

Because the room was small, and the woman cared much more about her son paying attention than being quiet, I still could hear everything they were saying.

"Now look at this one," she said, pulling him towards the photograph of the segregated water fountains.

"Yes it is," she said. "That's why I want you to read all these pictures. To see how far we've come."

By now the only people in the room were my husband and me, this woman, and her son. It was obvious I'd heard everything she was saying to him, and, since I'm not that good at hiding my emotions, that it had affected me. When we walked by each other leaving the exhibit she looked at me and I couldn't help but blurt something out.

"You're a good mother," I said, which I hoped encompassed everything I was feeling.

"Thank you," she said, giving me a small smile and nod.

After we left I looked back in and saw that the exhibit room was empty. I asked my husband to snap a picture of me. 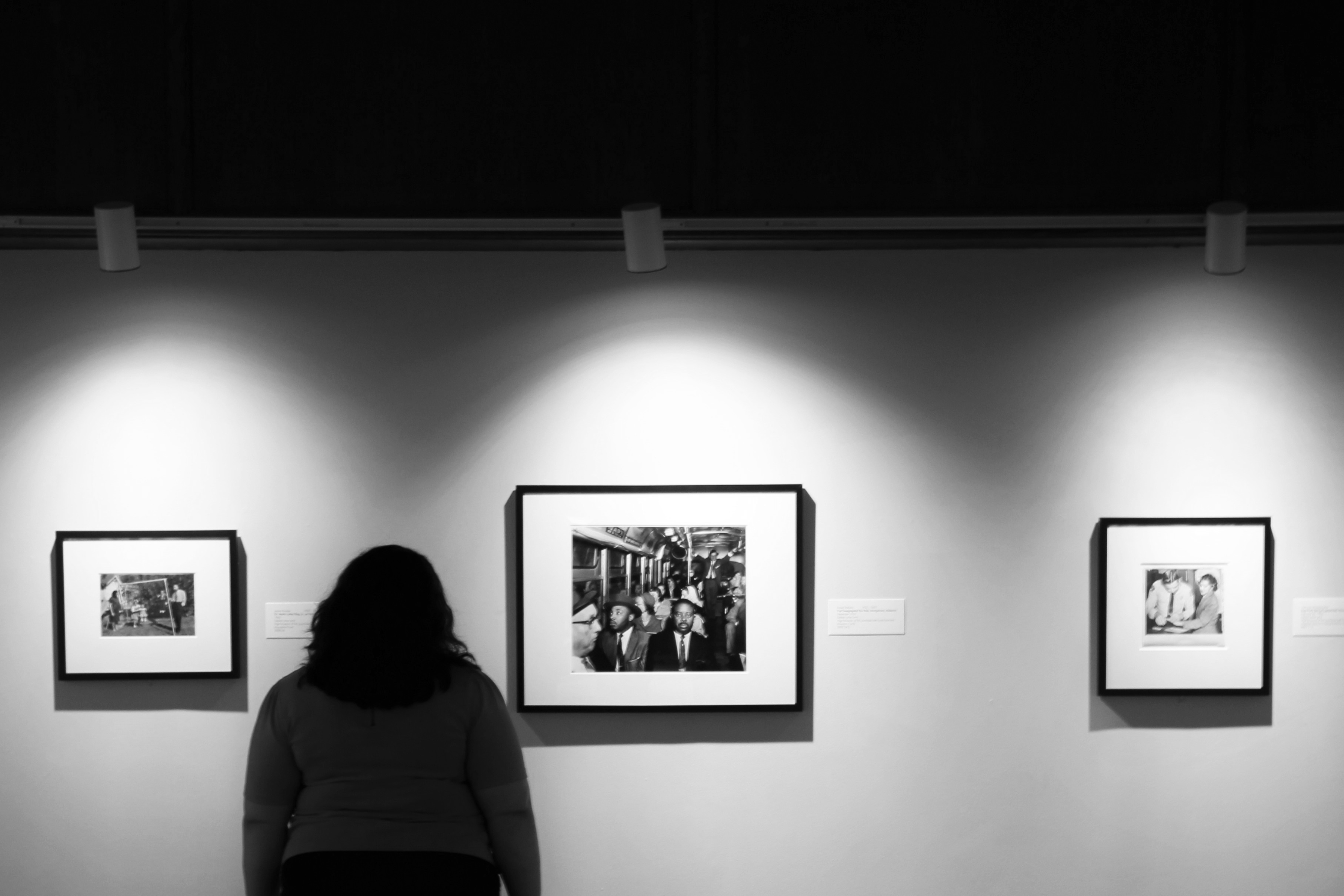 I've seen a lot of talk lately about privilege -- who has it, if it matters, what owning up to it looks like, etc. It can be hard for people like me, who have immense privilege, to truly grasp what that means, since we don't know what it's like to not have it.

Last night though, walking through that exhibit, I got a chance to not just see pictures from the past, but an illustration of my current privilege.

How I looked at those photos, and how the mother and her son looked at those photos, could not be more different -- even if our reactions to injustice is the same. For me, I feel horror and anger and a desire to have been able to do something to stop what was happening. But none of that happened to me, or people who look like me. None of that happened to my grandparents*, or my parents, or the people I was raised by.

I will never understand what it's like to look at a photo of people being assaulted by police with a high-powered water hose, and know that 50 years ago, that could be me. Or my child. I'll never know what it's like to try and overcome this. Both emotionally, and systematically.

Privilege to me isn't about white guilt, or political correctness, or a fear of offending people. Privilege to me is standing side-by-side with an African-American woman and her son, looking at the same photo, and acknowledging that only one of us bears the weight of this history.

Or really, that only one of us has a choice in how this history will affect us.


*My Filipino grandfather was a segregated messman in the Navy