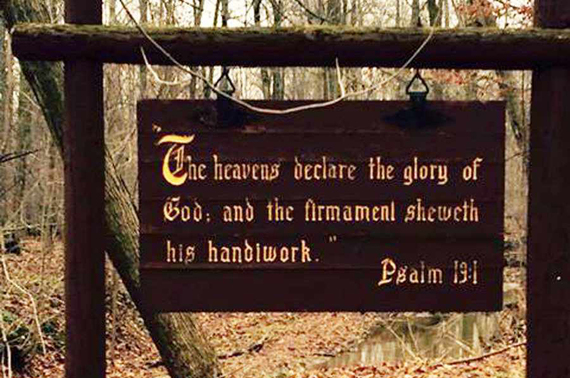 In a local county park in conservative West Michigan, where I am from, a sign was recently taken down. The wooden sign featured a verse from the Psalms: "The heavens declare the glory of God; and the firmament sheweth his handiwork." It was apparently put there in the 1960's. To many in the area, this was an important sign.

The reaction to this sign being removed? Outrage. Complete and total outrage.

"This is a shame. Whatever happened to the freedom of speech? Guess some people just can't stand the truth of this sign."

"The sign wasn't hurting anyone. It sat there for 40 years without complaint."

"It's militant humanism and atheism that works through intimidation to push out all semblances of the Christian faith from the public square. It truly does come straight from the pit of hell."

"This makes me sad and mad."

"The group [responsible for the sign being removed] are not a "civil rights" group, but are rather a 'hate group.'"

"Personally, I thought about going to the park and carving Bible verses and crosses on every tree in the park."

"We must not only pray about this attack on Christians being able to publicly express our faith, we must also make use of available 'earthly means' to combat it."

"I would rather proclaim my faith loudly -- on a sign, on a hilltop, on the internet, than succumb to the pressures of my culture. For one day I will have to give account for what I have done, and if I am not willing to share my faith proudly, why should Jesus recognize me?"

A great question. Would Jesus recognize you?

Because while the shocking news of this sign being removed was being absorbed across West Michigan, there was a report coming out of DC about the CIA's torture practices.

Dan Froomkin of the Intercept notes,

"The report adds nauseating new details to the already substantial record of the CIA's enthusiastic descent into savagery after capturing its first terror suspects, post-9/11." And not only did they descend into savagery with these practices, they lied about what they were actually doing: "The authors [of the report] don't just document these new atrocities, they cite them to illustrate how baldly CIA officials deceived others about what was really going on."

The reaction to this news in West Michigan? From much of the conservative side, it has been largely silence, or defense of the practice of torture, or dismissal of the report as a threat to national security.

"It's not torture, it's ''necessary enhanced interrogation.'"

"Do the critics realize the type of barbarians we are dealing with over there? It is easy for people with no skin in the game to stand on their moral soap box and trash the intelligence agencies."

"How about the thousands of innocent people that have died at the hands of these wackos?? I would do everything and anything I could to get information out of these people."

"If interrogations are so inaccurate, why have they been common practice for thousands of years? Torture is sometimes necessary."

U.S. Rep. Bill Huizenga, a Republican from West Michigan, contends the report is a piece of "political propaganda" that poses risk to the U.S:

"I find it extremely troubling that Senate Democrats have released this piece of revisionist history under the guise of a 'study.' There was an opportunity to produce a bipartisan report that reflected a true account of the CIA's conduct in the days following 9/11, however that did not happen," Huizenga said in a statement.

"I am very concerned that this piece of political propaganda will further endanger the lives of our brave men and women serving in dangerous and volatile regions across the globe. Lastly, I am bothered by this document's potential to cause even greater damage to the United States' standing, not only with our current allies, but potential allies in the future."

Back to the question our person defending the park sign asked: "Would Jesus recognize us?" I daresay he would have a hard time recognizing as his follower someone who endorses leaving a person "completely unresponsive, with bubbles rising through his open, full mouth" after a session of repeated near-drownings on the waterboard.

Jesus wouldn't recognize "love of enemy" in practices of sleep deprivation that "involve keeping detainees awake for up to 180 hours, usually standing or in stress positions, at times with their hands shackled above their heads."

He surely wouldn't see brutal "rectal feeding" as an equivalent to feeding the 5,000 or trusting God for "our daily bread."

And the Apostle Paul wouldn't consider subjecting an enemy to ice baths and 66 hours of standing sleep deprivation while threatening to sexually assault his family as "heaping burning coals on his head."

Paul put it this way: "Do not take revenge my friends... If your enemy is hungry, feed him; if he is thirsty, give him something to drink.In doing this, you will heap burning coals on his head." (Romans 12:19-20, NIV)

The burning coals were a metaphor for being so good to your enemy that their own evil practices would bring them shame and possibly bring about a change in their hearts as well. Paul follows this injunction with "Do not be overcome by evil, but overcome evil with good."

It is a wonder to me that in a highly Christian region, the removal of a sign with a Bible verse--a piece of wood--from a park, is more important, more a threat to their faith, worthy of more moral outrage than the revelation that our nation has been committing torture against other human beings, the very ones Jesus calls us to love. Actions which, by the way, are international human rights violations and illegal crimes.

Jesus had words for those who demanded that their faith be trumpeted in public places, like in a public park or on the street corner: ""Don't be like the hypocrites who love to pray publicly on street corners and in the synagogues where everyone can see them. I tell you the truth, that is all the reward they will ever get." (Matt. 6:5, NLT)

If we really want to be known as Christians, that is, those who are like Christ, then perhaps we might start by caring more about how we treat each other, how we treat even our worst enemies, then whether or not we can post a biblical verse somewhere. Seems to me that such a sign, without accompanying concern for justice, without a desire to extend love and mercy, is a sign that mocks us.

A sign was removed from a public park. There was outrage and indignation.

A report came out reflecting just some of the terrible ways our government agencies and military arms treat human beings. There was silence, or even defense of such actions.

I think there is an important sign here. Just not the one that was taken down.