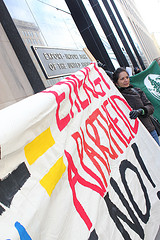 The United States is poised to help lock South Africa into dependence on dirty energy for decades to come.

The U.S. Export-Import bank (Ex-Im) is the official export credit agency of the U.S. and a good friend of dirty energy. It provides financial support to U.S. companies seeking to do business abroad, and has recently lent a huge helping hand to coal.

Despite the fact that Ex-Im has recently adopted a new Carbon Policy, which is supposed to help the agency reduce its greenhouse gas footprint, Ex-Im is on a fossil fuel binge, supporting dirty energy projects around the globe. The latest proposed deal is the Kusile project in South Africa, which includes the construction of one of the world's largest coal plants. At 4,800 megawatts, the Kusile plant, a project of Eskom, South Africa's state-owned power utility, would spew out 36.8 million tons of carbon dioxide equivalent emissions each year, according to Eskom's own Environmental Impact Assessment.

Readers may recall that just last year Eskom received a loan of more than $3 billion from the World Bank to build yet another 4,800 MW coal plant (the Medupi project), amidst widespread opposition from civil society in South Africa and around the world. The Kusile plant is also facing growing opposition. Over twenty South African non-governmental organizations have signed a letter to Ex-Im's board urging it to reject the project, and it's easy to see why. 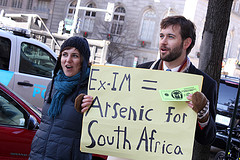 Kusile would be an environmental, public health, and development disaster. It would burn more than 17 metric tons of coal a year, leading to an increase in environmentally damaging coal mines and further degradation of the local water supply. The plant would also create a variety of health problems for local communities; it would emit sulphur dioxide and nitrogen oxide at a rate that exceeds South African safety standards, polluting the air and leading to diseases like asthma and emphysema. Additionally, approximately 1,000 hectares of land would be needed for Kusile's toxic coal ash dump. This ash, left over when coal is burned, contains heavy metals and toxins such as arsenic, uranium and mercury, which can cause cancer as well as neurological and developmental disorders.

The supposed economic benefits that Kusile would provide to impoverished South Africans are minimal. Less than 50 percent of the economic wealth created by this project would stay in South Africa. And more than half of the project's budget will be spent on imported equipment and hiring foreign specialists. Moreover, Eskom stands on shaky ground financially; it has been repeatedly accused of financial misconduct and has received several publicly-financed bailouts. It's possible that South Africa's citizens could be on the hook for the debt this deal could create. But it gets worse. 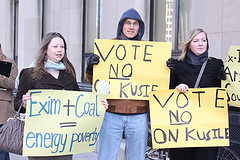 The Ex-Im board, which will vote on this project soon, must not approve financing for this climate-polluting behemoth. Ex-Im Bank is an institution supported by U.S. taxpayers, yet it is failing to live up to its own policies to reduce greenhouse gases as well as congressional mandates to increase support for renewable energy. Congress has directed Ex-Im to adopt a 10 percent financing target for environmentally beneficial exports, specifically for renewable energy and energy efficient end-use technologies. But over the past seven and a half years, financing for environmentally beneficial exports represented only 0.23 percent of total Ex-Im financed exports, magnitudes short of the congressional requirement.

To make matters worse, President Obama has been on the wrong side of this fight. In 2009 he made a pledge at the G-20 summit to phase out fossil fuel subsidies, but last year he put swing state politics ahead of clean energy promises: In June, the Ex-Im board initially did the right thing and rejected the massive Sasan coal project in India because of its outrageous carbon footprint, but Obama pressured the agency to do a U-turn and approve the project. If American taxpayers are going to be supporting U.S. exports, our money needs to go toward sustainable, environmentally-friendly energy projects (which also produce 2-3 times more jobs than fossil fuel export projects), not wasteful and environmentally destructive coal boondoggles like Sasan and Kusile.

Ex-Im board members must vote no on this environmentally and socially devastating clunker of a project that would lock South Africa into dependence on dirty energy for decades. President Obama and Ex-Im have acted irresponsibly, paying lip service to green energy projects while funneling billions to dirty coal projects. Both have a chance to begin to redeem themselves by rejecting this deal.