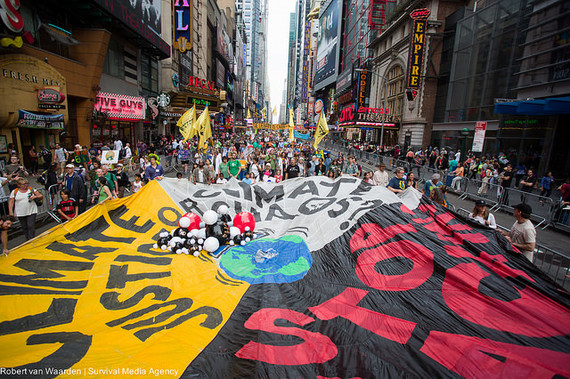 The march was on the eve of the historic UN Climate Summit hosted by Secretary Moon, which is held in conjunction with the U.N.'s General Assembly, it's largest and most significant annual event.

Universities and even the successors to Standard Oil, the Rockefellers, are divesting their investments in fossil fuels.

Historically high fuel standards are transforming the automobile sector and transportation across the U.S. and the globe. The Environmental Protection Agency (EPA) is instituting more rigorous standards for power plants, too.

Such is the case with climate change and the need for and benefits of clean energy and sustainable products and services.

The U.S is increasingly energy independent, thanks to innovations in the energy sector including natural gas (a fossil fuel). Yet, oil needs still dominate our geopolitics and inextricably link us to petrodictators and energy "hot spots."

The U.S. military knows firsthand that energy is a national security issue, and is the world's largest single energy user - and been a leader in energy efficiency and diversification. It has increasingly invested in new technologies and energy efficient methods to reduce the energy consumption of installations and to reduce the burden on and risk to servicemembers (e.g., the battery weight they have to carry).

The Pubic "Gets it" Now

The public is fed up with extreme weather events wiping out their homes and neighborhoods. Environment America reports that 80 percent of U.S. counties -- or four of five Americans -- have experienced an extreme weather event since 2007. Fires. Droughts, Floods, Severe storms. And, it's expected to get worse.

We all want to turn on our faucets and find water, safe, potable water - and want to continue to conveniently recharge their smartphones, laptops, TVs, and refrigerators without concern.

Climate change is now accepted fact by 97 percent of scientists, most of the public and even most government leaders, in the U.S. and around the globe. Some corporate executives "get it" and are reducing their carbon footprints significantly and giving sustainability a seat at the senior-level tables, but there's much more they should do.

"We may not like the reality of climate change, but businesses everywhere have an affirmative duty to address it and do their best to provide adaptation solutions - for their bottom line and as a key component of their corporate social responsibility initiatives," says Rebecca R. Rubin, President and CEO of environmental consulting firm Marstel-Day LLC.

Yet, nothing happens at the systemic level, with federal policy. We can seize this moment to put our drive to cleaning up our planet on "steroids" and create jobs on the process, but we aren't -- at least not at the level that we could be.

NOAA, the National Oceanic and Atmospheric Administration declared that 2014 is on track to be the hottest year in its 134 years of keeping records.

To seize this moment exponentially -- the way only American ingenuity can -- we need:

1. A comprehensive national energy policy that transitions us to a clean energy future: We need an all-of-the-above-but-greatly-diminishing-fossil-fuels strategy. We won't be getting off fossil fuels tomorrow, as former Pennsylvania Governor Ed Rendell said today in The Atlantic Energy Town Hall in Phillie, so we don't want to make them the enemy. But we do need to leave most of it in the ground to keep the planet inhabitable. Yet, Congress dithers, afraid to challenge their financial supporters in the energy sector.

Do the Senators from Texas and North Dakota really fear that the energy companies will stop supporting them? Energy companies need a voice at the political table no matter who is seated there and they know it. You can't move an oil well.

2. Deployment of the existing technologies that can significantly reduce our energy demands: The technologies exist to drive a clean energy economy, as Jigar Shah wrote in his book, Creating Climate Wealth, and in his blog on "What Einstein Might Say After People's Climate March" about what to do after the march. We can create jobs with the technologies that we currently have if only more people will embrace them.

3. An infrastructure that transition to a clean energy tomorrow -- and protects communities: The furor over the Keystone Pipeline is about accelerating a new energy future, versus committing to continued fossil fuel-dominance, as well about safety and the displacement of families.

4. A tax on carbon: The energy companies are planning for it already because they know it's coming, but the uncertainty is holding back innovations and investments. This tax will support the new infrastructure we need to shift to a clean energy infrastructure, including educating the workforce of tomorrow. We tax tobacco, so let's tax carbon.

Leaders rise at moments in history that are inflection points. Leaders come in all shapes, colors, ages, backgrounds, genders, and geographic locations. At this inflection point, we need leaders who can separate "the way we've always done it" from "what we need today and to be successful tomorrow," and who have the courage to buck the old-energy money in favor of a clean energy future.

As Thomas Edison said, "Restlessness is discontent and discontent is the first necessity of progress."

The masses are restless to for their leaders to give them a clean, healthy future that requires clean air, water and energy.

What has to happen for our leaders to lead us to a clean energy tomorrow at this inflection point?
The masses are restless and want federal, high-level action.