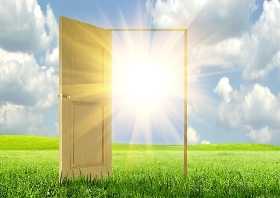 An inner revolution started decades ago. You've probably been a part of it, at least in some small way, and probably don't even know. Yoga began this revolution in the 1960s with its focus on breathing, exercise, relaxation and the ritual of sharing "Namaste" at the end when we acknowledge the Divine in each other. A second wave, meditation, came in the 1960s and 1970s stirring concentration, clarity and emotional positivity. Mindfulness is coming on strong now. If you practice being fully present to what is arising you are practicing mindfulness. Books, conferences and seminars, too numerous to count, are spreading these processes for connecting with our inner self.

Quantum physics is fanning the flames of this inner revolution. At this point, you might be saying, "quantum what?" Quantum physics studies the composition of atomic and subatomic particles. Think very small. In 1933, Erwin Schrodinger, the Nobel Prize winner for physics, said, "Quantum physics thus reveals a basic oneness of the universe." This means at an atomic and subatomic level everything is connected. In other words, everything is interrelated, interconnected and interdependent. This does not align with what the eye can see but many contemporary scientists including Bruce Lipton are sharing this is true and are adding to this body of knowledge. Father Thomas Keating says it this way, "We are distinct but never separate."

Simply stated, all of life -- everything -- is a part of one thing. We can say there is a unity of all of life. Cutting-edge science is revealing this. Sacred text is filled with numerous quotes supporting this. Near-death experiences share similar accounts where we come upon Divine light and feel a Oneness with all that is shortly following our departure from the body. And, increasingly, we are feeling into this directly by communing with the Divine within. There is growing consciousness that we are all part of one presence, the Divine.

This is not new thought, it was expressed in the Vedas in 1500 B.C., Ralph Waldo Emerson wrote about it in the 19th Century and French Jesuit, biologists and paleontologist, Pierre Teilhard de Chardin described what he called a "Divine Milieu" in the early 20th century. Many contemporary books attest to Oneness and the Divine in life but to this point the paradigm has not broken out into the mainstream.

Today, little by little, the focus appears to be shifting to living a conscious life, heart centered and connected to the Divine. As awareness moves from the head to the heart, people report feeling a self-love but also a compassion for the world, what some call the true Self. They report they are more relaxed, more present and more fulfilled.

What started as breathing, relaxation and concentration is clearly evolving into something more. It is morphing into a connection space, one could even call it a communion space, where we feel our connection with the Divine, each other and the Earth. On our inner journey it seems that we are now exploring new possibilities: peace, balance and clarity but also access to the Divine's wisdom, beauty, majesty, grace, prosperity and even healing.

The more we remain connected to the Divine and live in a place of service, the more health, well-being and prosperity return to us. Some share it is a boomerang effect that comes from placing our self in service. Matthew 6:33 says "seek ye the Kingdom of God and his righteousness, and all these things shall be added unto you." Perhaps this is true. It seems when we go within to commune with the Divine, we enter a vast new frontier with infinite potential. Certainly we journey a long way from the imbalance, stress and challenges many are confronting.

If we want to live a healthy life we are wise to consciously tune in to this inner revolution. It is spreading and perhaps in the not too distant future will impact all our lives.

If you'd like to learn more, join us on Global Oneness Day, Friday, October 24th. Global Oneness Day is our "Earth Day" for an awakened humanity and this year Archbishop Desmond Tutu, Marianne Williamson, Ken Wilber, Panache Desai and Dr. Larry Dossey are a few of the over 50+ leaders who are participating.