It seems simple enough, even a little romantic, a little American-dreamy: I'm looking to buy some property.

Northward. Woodsy. Modernrusticsexycool. Just the sweetest and most perfect getaway property ever, is all, something about an hour or two from San Francisco, up in the more lushly arboreal regions of Sonoma or Napa counties, remote enough to quell the city's roar but not so remote to be inhaling all the off-gasses from regional meth labs or suffering any gunfire from Mendocino's cranky pot kingpins.

Is it too much to ask? A modest home-slash-retreat space on a few acres that can maybe house a handful of yoga students and/or writers for a long weekend, accessible to civilization but not so snobbish that you can't run around naked and covered in chocolate and bourbon and dreams, and all of it on columnist/yoga teacher's budget? 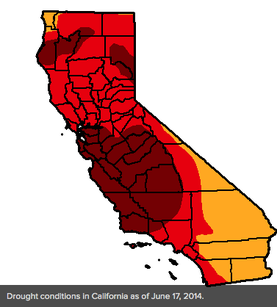 It might be. Obvious Problem No. 1: I don't work for Google, or Oracle, or FaceTwitChat, and therefore am not up to my flaccid fleece hoodie in mountains of tech-bro cash that I can throw around like Monopoly money; I don't even have an extra $2 million to buy a closet-sized condo in the Mission. It makes things a little rough.

But I'm not bitter. Just... realistic. There's still plenty of lovely opportunities to be had, even if prices have leapt into the near-stratosphere pretty much everywhere. Translation: From what I've seen so far, my modest budget limits me to places that are a little hardscrabble, a little rough-hewn, a little needful of significant upkeep of their aging septic systems, coarse landscapes and, invariably, spring-fed water.

Wait, what? Right, the water. The Looming Issue. The Unexpected Fear. Water -- or rather, the potential lack thereof -- is something I didn't realize I'd be quite so worried about when I started my search. But now? It's damn near unavoidable.

Problem is, I work in media. Every day I see the stories. Every day I read the reports, scan the graphs, am stunned by charts showing nearly the entire state of California -- not to mention huge swaths of the world -- drenched in dark purple or blood red, hovering somewhere between "severe drought," "exceptional drought" and "OMG we are so fucked."

Did you know this past May was the hottest May the world has ever known? Did you read it was just 110 degrees in Mumbai... at 1:00 in the morning? Did you know global warming is no longer a preventable possibility, but a exceedingly brutal reality? The Southwest's savage drought is just the beginning.

How about the fact that California's record drought just got worse, given how the meager winter snowpack is gone and hence the fire danger is already at ridiculous levels? There is no more fire season, per se. It's now just one continuous threat that never ends.

The facts swirl and threaten, mingle and conflict. What to believe? How fearful and anxious to be, exactly? Forget skyrocketing real estate prices. Is it just too risky to buy rural property around here anymore? How long until all those wells and springs run dry? Until the big lakes no longer feed the reservoirs? Until fire danger is out of control? Did you know, just this past January, before the meager rains finally came, that 17 California counties were at risk of completely running out of water within two to four months?

It's hard to know where to look for answers. I do know, for example, that something like 85 percent of California's water goes to agribusiness. And much of that goes to grow grain, to feed industrial cattle, to supply fast-food addictions and excess beef consumption. The basic rule persists: Want to save the most water? Stop eating so much meat. And almonds. And California rice. And so on. 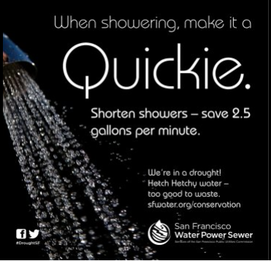 Despite this fact, San Francisco just launched a "sexy" new water-saving ad campaign, encouraging urbanites to cut back 10 percent by "making it a quickie" in the shower, which is all cute and fun until you learn that SF actually uses the least water of any major county in the state, less than a fifth of what Sacramento gulps per capita. And even Sacto's gluttony is half of what Palm Desert sucks away for all those ridiculous lawns, golf courses and pools.

But all of California's urbanites combined come nowhere near to the amount of water that goes to big agribusiness - and by and large, they have little or no regulation at all. Bottom line: even if SF cuts back 10 percent, we're only saving what, about one percent of the total? Two?...