"A picture is worth a thousand words."

Arthur Brisbane, author of the famed adage first outlined in 1911, likely had no idea how clairvoyant his words would eventually become. In his Emoji-less, Instagram void world, Mr. Brisbane still foresaw the power of a picture.

Decades later, one could discern that our generation speaks at a trillion miles a minute with the rapid circulation of picture texts, Tumblr posts and Snapchats. That's without considering how many words Arthur would accredit to a GIF, a Vine or a YouTube video.

But the discussion never really was about how we were communicating -- rather, the focus has always been centric around what we are saying. Arguably, a picture has become far more than a mere 1,000 words to an average Millennial. 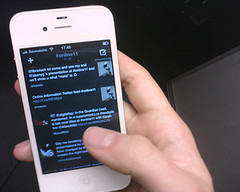 Our lives revolve around platforms that shove endless, mesmerizing streams of photos in front of our eyes. Just last year, Facebook pulled a 180° on its 1.3 billion users and unleashed a disarmingly simplified image-focused redesign that automatically buried text heavy status updates and posts underneath pictures of friends' smiling faces. Even Twitter, a platform rooted in plain 140-or-less Tweets, underwent a facelift that introduced "Visual Tweets" that embedded previews of photos and videos directly into a users' timelines.

So the question remains: What exactly are we communicating to each other?

Within the flurry of social medias, it's unsurprising that Instagram has steadily gained clout over other popular platforms. How else could the phrase "selfie" blossom? Underneath who-knows-how-many layers of Lo-Fi and Valencia filters, the answer -- quite literally -- is staring us in the face.

Selfies, the new age portrait, noiselessly scream "LOOK AT ME." Now, before you've rolled your eyes and picked your phone back up searching for a new notification, take note: this seemingly obvious message carries impactful side effects that are seriously changing the mindset of our coming generations.

A like once literally conveyed, "I like this," or "I like what you're saying." Over time, as the population realized how social media could alter one's own image perceived by their friends and the rest of the world, a like transformed into "I approve of you, what you are saying and/or what you look like." And as people became glued to their newsfeeds with less excuses to simply overlook a post or two, the mere absence of a like became an outward expression of the opposite.

I feel it in my own conscious when I prepare a photo to post on my Instagram feed; a muted, but present voice that questions if the clothes I'm wearing are well framed, if the filters I've carefully chosen will appear flattering and if what I'm posting is interesting enough to garner likes from my followers. Right under our noses and double-tapping fingers, social media wordlessly transformed from a place to share into a defining partition of our own self-image.

That's not to say the influx of social media influence hasn't birthed positive results as well. I've seen friends of various talents smartly utilize the ability to directly connect with people all over the world to become "Internet famous." As a part time model, I've seen how Instagram can function as an unofficial digital business card for photographers, businesses and fans to interact with. A friend's personal journey to lose weight and become fit has launched her page into one of a yoga icon that has collected hundreds of thousands of followers along with sponsorship offers from dozens of clothing brands designed for bendy yogis.

As both a woman and a young person, I am constantly bombarded with controversial headlines that demand society to stop using Photoshop to manipulate unrealistic body images and upset about fat-shaming, skinny-shaming and race-shaming. You name it -- someone is likely shaming it. Perhaps the underlying reason why I always desire to look more tan in my photos is the same as why Kylie Jenner suddenly looks like she's 25-years old and constantly drowsy (read: drunk) when she's barely had her driver's license for a year.

Society's acceptance used to be a judgment isolated to unlucky celebrities and vicious tabloid magazines. Social media, our constant frenemy, has abridged that gap and bared our selves -- our faces, our bodies, our clothes, our doings and our thoughts -- for the entire online world to judge. As the younger generation begins to infiltrate our social medias and whichever that may arise next, it will be important to refocus the meaning of a like, a comment or a follow. Nudging the notoriously disdainful atmosphere of the Internet away from narcissistic popularity contests and celebrity-dom and further towards a platform of useful, thought-provoking information as it once was could recapture the thoughtfulness and positivity of the Millennial generation.

A picture does speak a thousand words. So what will you say today?