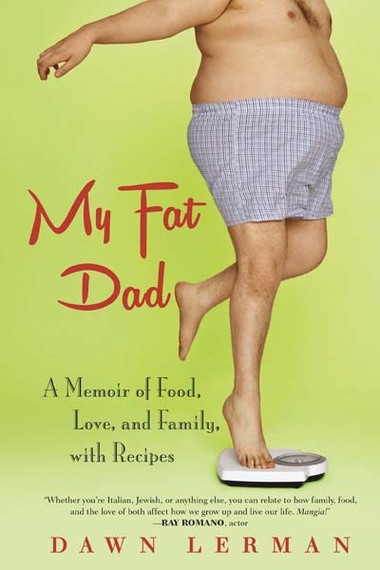 Martha Rosenberg: Your book is different from other memoirs because it focuses on food and even has recipes. Who do you think My Fat Dad will appeal to?

Dawn Lerman: My Fat Dad is based on my column in the Well blog of the NY Times. The appeal of the stories ranges from young girls who can relate to my coming of age -- finding my voice in a very colorful family, first love -- to anyone who had an overweight parent or a grandparent who changed their life through home cooked food.

My 450-pound ad man father was one of the original "Mad Men." He was responsible for iconic slogans such as "Coke is It," "Leggo My Eggo," and "Once You Pop You Can't Stop." And my grandmother, Beauty, saved my life with her weekly recipe cards when we moved to Manhattan from Chicago when I was 9. I have pages and pages of emails from people all over the world, from China to India, to Florida for whom the book brought up memories of their own families, upbringings and foods.

Martha Rosenberg: A lot of time has elapsed since what you wrote about your dad and your grandmother, Beauty. I bet many people are wondering how they fared. I am almost afraid to ask but did your dad survive the lung cancer?

Dawn Lerman: Yes he did. He survived Stage 3 lung cancer and he is now 230 pounds. He has been a vegan for many years.

Martha Rosenberg: In your book you say he smoked as compulsively as he ate. Did he stop smoking when he got the cancer diagnosis?

Dawn Lerman: Actually, he had quit smoking 10 years earlier but often people who smoked a lot and quit still get lung cancer. When my dad got diagnosed, I began sending him books and recipes to inspire him. Most of my life I tried to get my dad excited about eating healthy, but the temptations associated with his fast paced life style got the best of him.

Not wanting to die, and newly retired from the ad business, he focused on his health and his recovery with the same "gusto" he had put previously into his campaigns like "You Only Go Around Once in Life, So Grab The Gusto" -- a famous tag line he wrote for Schlitz beer.

He eliminated: sugar, dairy and white flour. And began adding miso soup, medicinal mushrooms and drank gallons of carrot juice. He was not even sick during chemo! He couldn't believe it -- he said he never felt better. The healthful eating and learning to cook also gave him an active role in battling cancer.

Martha Rosenberg: You have a chapter in the book about how similarly well you dad did when he spent six months at the Fat Farm at Duke University, eating only white rice and small bits of fruit and protein and became an active participant with a recovering community. Do you see his eating as an addiction?

Dawn Lerman: Looking back, his pattern of yoyo dieting was definitely an addiction. His weight would often fluctuate 100 pounds depending on the diet of the week. One of my earliest memory with my dad is making a Weight Watcher's cheesecake where he cheerfully stated that the only thing better then cake, would be a world with out calories.

Martha Rosenberg: I was surprised in your book that you did not develop weight or eating issues yourself.

Dawn Lerman: I was health conscious not weight conscious. Then and now I never liked processed foods. For example, long before the publicity over the Styrofoam agent in Subway bread [azodiacarbonamide, used in yoga mats and shoe soles] I could tell there was something wrong with the taste. My grandmother Beauty modeled healthful eating and used to say to me, "Fruit gets moldy, vegetables get soggy, if it lasts for months on a shelf imagine what it does to your body?"

Dawn Lerman: She lived until 95 and never had a cough or a cold. On her last day she had cleaned my mother's home and stayed up until 3 in the morning dancing at a party. She died looking at the Hollywood Hills.

Martha Rosenberg: You were not nearly as close to your paternal grandmother. Your dad mentions in that she never understood him. And instead of saying she loved him, she fed him. This line is very telling on the toll emotions have on our eating patterns. How long did she live?

Dawn Lerman: She only lived into her 70s. She developed diabetes and lost fingers. My parental grandmother had had a very tough life, working in the factories since the age of 13 and had experienced huge early stresses in her life. In fact, neither she nor my dad ever talked about what she had been through.

Martha Rosenberg: Do you feel the influences of your dad's eating problem and Beauty's food awareness inspired you to get a degree in nutrition and make food your career?

Dawn Lerman: I had many careers before I went back to school for nutrition. When my dad was diagnosed with cancer I was a new mother. I wanted to learn everything I could about food and it's healing power. I had already been a health food junkie since the age of 11, but I knew there was so much more to learn.

There is nothing that excites me more then learning about a new superfood, creating a recipe for the first time, or inspiring kids to try foods they thought they would not like -- kale chips, sweet potato hummus, pineapple guacamole. When kids are involved in the process they are more likely to try it. It was in my grandmother's kitchen that I learned what it felt like to be loved and nourished.

Martha Rosenberg: There is so much new information these days about the effects of these things on children and even adults. In addition to dyes, chemicals and toxins, we are learning that antibiotics actually affect mood and cognition by killing the "good" bacteria in our microbiomes.

Dawn Lerman: Yes there are so many environmental factors -- the air, cell phones, computers -- it is hard to control everything. However making good food choices and cooking with our kids even if it is only once a week is something we can all do. Food is about more then protein carbs and fat.

Dawn Lerman is a New York-based health and nutrition expert and author of My Fat Dad: A Memoir of Food, Love, and Family with Recipes, published September 2015. Her series on growing up with a fat father appears on the Well blog of the NY Times. Dawn counsels clients on weight loss, diabetes, high blood pressure, and other diet-related conditions. She is a sought-after speaker and consultant and lives in New York with her two children.

For more information about Dawn, go to www.DawnLerman.net.