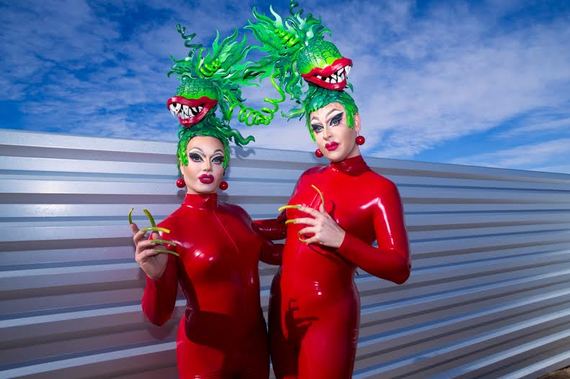 The first time I saw The Boulet Brothers at one of their events I was in awe. These two towering figures with gorgeous, sinister makeup wearing layers of latex and a sky-high wigs had a firm hold over the crowd, in part due to the tray of shots they were about to pass out, but also most certainly thanks to their general presence. When you see The Boulet Brothers it's clear that you're looking at artists completely sure of their point of view, who know how to execute their vision to a T. As the show they were hosting (Queen Kong, their weekly event in Downtown Los Angeles) went on, act after act of massively talented, alternative performers took to the stage and showed the audience what's really going on in Los Angeles' creative scene.

In addition to Queen Kong, The Boulet Brothers tour with their event Dragula, which has run in Los Angeles, San Francisco and NYC, and features a midnight pageant showcasing the best looks of the crowd. Every Boulet Brothers event I've attended has included crowd involvement, which as an audience member makes you feel very much included - like you're a participant rather than just a spectator. They challenge notions of masculinity and beauty, celebrate individuality and, well, filth. I got a chance to talk to The Boulet Brothers about some of their ideas about drag, how they got started in Los Angeles, and where they would like go next.

When you first moved to Los Angeles from New York, what was the biggest difference you noticed in the nightlife scene?

Everything was very clean and safe here in LA. The clubs were pop-centric, the venues were very polished looking with lots of security and all that. Everything was "18 and over." We couldn't find that raw, trashy chic, artistic vibe that the East Village had. Celebrities there would kill to get into the trashiest little dive bars for certain parties, and here in LA you wouldn't catch a famous person dead in a place like that.

Drag has many forms, but it seems to lend itself perfectly to the more sinister looks that are the signature of events like Dragula. Why do you think there is such a strong connection between drag and darkness?

I think many gay men who grow up not fitting into the universal idea of masculinity and male beauty can relate to fictional, fabulous angry outsiders like Disney villanesses or (depending on your generation) people like Siouxsie Sioux, Lady Gaga, or characters from the Rocky Horror Picture Show. If you are kind of fem and creative looking, these are your heroes. They were dark and moody, but fabulous and iconic and powerful - everything a lot of gay guys at that age wants to be. These characters are not victimized for being outsiders but empowered by it, and so there is strength in that darkness that you can look up to. Life isn't muscley and pretty and fish and rainbow flags for all gay men, and growing up can be painful. As you can imagine, pain comes with a little darkness.

There are some people in the queer community who are fiercely opposed to the normalization of queer culture, specifically via RuPaul's Drag Race. Do you think it's an unequivocally good thing that what was once a major taboo is now quickly becoming absorbed into the mainstream?

Yes and no. The world, people and society, is like everything in life; it's constantly growing and changing, and you have to embrace the change or fall to the wayside. Now that being said, as good as progress and acceptance is for the gay community, a lot of us don't want to be safe and accepted by the rest of society. We don't want to "normalize" the gay community, or put it into a safe, acceptable package. That is partially why we as the Boulet Brothers do what we do and create the type of events that we create. We celebrate being queer, wild, free, in your face, and politically incorrect. We want to be one hundred percent gay as hell, and we don't need anyone's acceptance to do that. 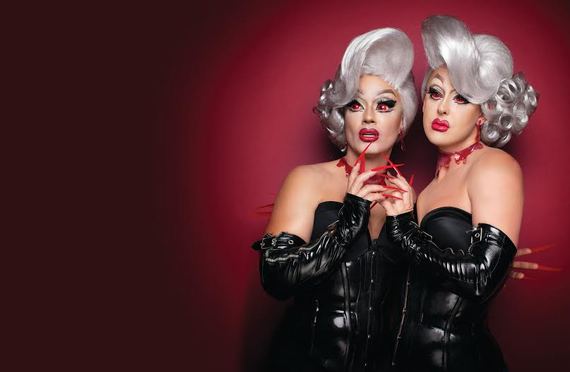 With so many accomplished years putting on events, is there anything you haven't seen a performer do on stage that you've been waiting for?

The different events you put on vary in theme and location, but is there consistently one part of putting together an event that proves to be the most challenging?

It's always money. It's our experience that more and more clubs are being bought up and operated by conglomerates and investors as opposed to individual mom and pop type owners. Because of that, there's a constant rotating staff of managers and owners you have to deal with that don't care about nightlife, who have no idea who you are and have no respect for your body of work, and are only in it to wring every last cent out of everything.

That being said, we feel our biggest accomplishment is that we've been able to fend off and appease these types of people and still bring the level of creativity, hard work and fun to our nights that we do. We put up a wall to all that and don't let it spill over onto the crowd, and the performers and the people who come to our nights.

Hailing from an era before cellphones ruled all, you must have memories of being out at clubs that don't include people staring at small illuminated screens inches from their face in the middle of the dance floor. Has the amount of people glued to their phones (and other technology) impacted the vibe of the crowds at your events?

No, I think we put on such insane nights that you don't really feel the impact at our parties - there is always something better to look at in our house than your phone. The only real difference is that now there are tons of pictures and video being taken all the time, so that is a little strange, but we have the crowd's attention regardless.

When you're organizing an event, what do you always make a priority?

That our lesbian stage manager can work that night. We won't run around talking to DJs and lighting people and chasing go-go dancers around in fourteen inch heels, fifteen layers of corsets, pads, tights and costuming anymore. Those days are (thankfully) over.

A lot of people categorize drag by region - New York City drag vs. San Francisco drag vs. Southern drag, etc. Have you found that Los Angeles has a unique style of drag?

It has about three. You have the super polished West Hollywood types (a lot of the Rupaul girls who live in LA tend to fall into this style), you have the art freak girls from the east side and downtown, and then a large Latina scene. 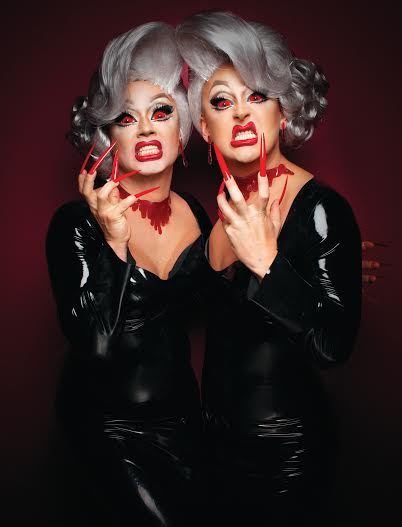 Before you began putting on your own events, you were performing in drag. Was it always in the plan to dress in twin-like looks, or is it something that evolved over time? What first drew you to the stage?

Well we actually didn't perform in drag before we started throwing events. We used to put on this weekly party called "Miss Kitty's Parlour" that had three stage shows a night and all these side stages and interactive performances through the night, which ran every Friday night for nine years. We were like blank canvasses during this time because we were characters in all these campy shows, so in one night we might be redneck grandmas, hookers on Santa Monica Blvd., male construction workers, or male prisoners. Whatever the show called for, we changed a bunch of times during the night. We had a host that announced the shows and was sort of the grand dame of the party back then, and it wasn't until we had to take her place ourselves that we formed our own identity and had to come out in front of the curtain. That's where the "Boulet Brothers" came from, because we had to come up with a new identity for ourselves and sort of be these modern day circus barkers and there were two of us so it just made sense.

What is something about the club kid scene that you don't think most people know?

Well there is no club kid scene for one, it's just a bunch of unconnected creative types around the world who like to dress up and that don't fit into the drag arena, so they all get lumped together. Society likes to put you in a group or category, so all these artists get clumped alongside one another that don't even have anything in common other than that they dress in nontraditional clothes. The "original" Club Kids were an extended group of friends in NYC that went out in the nineties and who drew inspiration from each other so they all kind of looked like they were from the same mismatched world. There's nothing more to it really.

You've mentioned eventually wanting to travel more and do occasional versus regular shows in L.A. What are some of the places you'd like to take a Boulet Brother's event that you haven't yet had the chance?

We've been getting more and more offers to travel and work other events and parties around the world as The Boulet Brothers (without our parties) as emcees and performers and that is what we are focusing on in the coming year. We've built a glamorous, filthy new arsenal of Boulet Brother music and costumes that we're waiting to unleash on the masses in the coming season, and we are ready to declare war on the "normalization of queer culture" as you put it.