Each Project Runway cast has its resident wit, the designer whose one-liners offer a welcome respite from the tension of the workroom and the humorless bitching of other contestants. Well, this season you can't swing a Brother sewing machine without hitting one of Anthony William's delicious quips, delivered in his sweet and sassy Alabama twang. I checked in with the fan favorite on the heels of his near-elimination to find out who's a bitch, who's a bigger bitch, and what's so wrong with Miss America.

(By the way, I blame my low blood sugar on the fact that I neglected to get his impressions of Tim, Heidi, Nina, and Michael. I apologize for this egregious -- or, as MK might say, "farty" -- oversight and promise not to make this mistake again next time.) 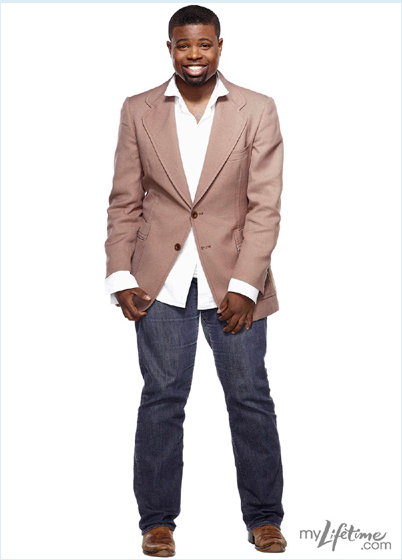 "Miami Vice was my thing, honey. That was my look!"

What's it like for you now that the show has started to air?
You know, I haven't been leaving my house really, but I went out this weekend and it was crazy. I am shocked and amazed that people know who I am. My pastor called me to the front of the church on Sunday and said "Anthony, you are turning that show out!"

Well, you are arguably the funniest contestant this season.
I don't really know how to be anybody else. I won't name names, but there are people on the show who do have a strategy. I just say what I say. Like that morning when I asked Jay if my rollers fell out, that's just something I would say when I wake up.

The remarkable thing is that you manage to be funny without it being at another designer's expense.
Those are some very talented individuals, so I don't really have any nasty things to say about them. And if I do have something to say, I don't wait to go into the little room to do my interview; I just say it to their face.

Care to give an example?
In the second challenge [the potato sack episode], Mila's model picked me to design her garment. And Mila just kept going on and on and on and on about it. Literally for the entire day. And you can see it on the show -- I just told her to her face that I didn't like it. I wasn't very ugly about it, but I told her there was no need for that.

We don't know much about your background except for the first episode when you say that "it was hell being black and gay in the ghetto" of Birmingham, Alabama. How did you get into designing?
First, let me say that I have gotten some flack for saying it was hell being black and gay in the ghetto. And I say [to my detractors] honey, I didn't go on Project Runway to promote a cause. I went to celebrate myself as a designer. But you know, growing up I had to learn how to survive. We didn't have a lot, so I learned how to turn $50 into $1,000. I would go to thrift stores and alter clothes. Miami Vice was my thing, honey. The pastel suits, no socks, rolled up sleeves--that was my look! My grandma sewed, but I wasn't exactly her favorite [laughs]. But God blessed me with an angel named Edith Gilliam, and she really took me under her wing. She taught me so many things. I do a lot of sewing on the machine, but I really love working with my hands. I love doing detail work, like hand-beading.

In the first episode, you said that it's your dream to design for Miss Universe or Miss USA but not Miss America. Somebody's being awful choosy. What's the difference?
[Laughs] Well, you don't need to have a talent to be Miss Universe. You just wear your bathing suit and your evening gown. And I think the slits in the dresses are a little bit higher at Miss USA. But really I just want to be involved in things that are a little edgier and less traditional [than Miss America]. But it's a great program as far as scholarships are concerned.

OK, It's time for dishing some dirt. When you first met the rest of the cast, who did you click with and who did you want to throttle?
Well, I did not exactly click with Jesus. He was a very interesting character to me, but I think some of his behavior was just due to his age. He came in all, "Bitches, I'm the baddest!" And we were like, "Honey, go sit down somewhere. We're too old for this."

One person I did click with and who I am still close friends with is Jay and another person who you might not know I clicked with was Ping. She and I both knew what it was like not to have stuff, you know? I remember one instance that we were eating lunch. One thing about Project Runway, honey, they make sure you are fed, and afterwards they were throwing the uneaten food away. It wouldn't have kept, so they had to do it, but Ping really became emotional when she saw them throwing it away. We don't waste food where we're from.

You might not have seen this, but I cried when Ping was eliminated. I mean, of course on one hand, since it was between the two of u,s I felt better she go than me, but I was very emotional. I felt I lost the one person on the show who reminded me of what it meant to be human. America never really got to see why some of us fell in love with Ping. I felt some of her most beautiful moments were edited out.

Speaking of Ping's elimination last week, what does it feel like to be on the chopping block? Were you surprised that you and Seth Aaron were one of the bottom two teams?
I don't really know how to answer that, because it sounds rehearsed, but I don't care about being in the bottom two or bottom three. I don't care because I realize I am a healthy competitor. I mean, you come on the show with the knowledge that there's a chance you might win and a chance you might lose. Honestly, when Seth Aaron and I were one of the bottom two teams I was just concerned about him; I didn't want to be the anchor that took him down with me.

Any final words for your fans?
Well, I do want to clear one thing up. One man wrote in an article that in the second episode I must have been running [around the workroom] because I found out that KFC was the grand prize. For the record, I prefer Popeye's.

Who else from Season 7 would you like to hear from? What are your burning questions? Let me know in the comments!