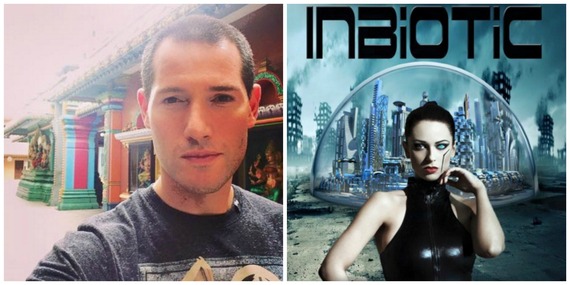 Right now you are reading this article on one of a myriad of technology devices that have become almost indispensable to our everyday living. While we aren't enjoying Marty McFly's 2015 future, with flying cars and skate boards, we are surrounded by futuristic technology. The geniuses in Silicon Valley have made it easier for us to work from anywhere, speak to anyone around the world, and research the important and the mundane equally as fast, all from our phones.

Unfortunately, this technology has not yet solved worldwide issues of mass violence; climate change and depleting natural resources; or discrimination in all its forms. But what if, the efficiency that Silicon Valley has afforded us in our personal lives was harnessed to create a better world?

James Suriano has created this new organized world in his debut science fiction novel, Inbiotic. A world with a less bureaucratic and more efficient government, where violence is limited, people live in a judgment free society, time is irrelevant, and we harness the power of technology to protect earth's valuable resources instead of wasting them or having endless meetings about them.

I had a chance to speak to James Suriano about Inbiotic in November. Listen to him discuss the writer's process as a new father, his influences, creating futuristic worlds, and the frustrations he has about life that drive him to write. His second novel, The Antarticans , and third novel, Dark, are scheduled to release in January and July of 2016 respectively.

True to its science fiction genre, Inbiotic presents us with answers to these great ifs with a society where a network of algorithms have rendered politicians useless, fixed the financial crisis by regulating markets and the environment by stopping the use of fossil fuels.

Machines have become the answers to human created problems; they have replaced people in mundane jobs as cheap and easy to staff HIDUs or Hologram Individual Deployment Units.

Androids and humans live side by side in a futuristic United States. A country that is dependent for its technology, energy, weapons, and work force on the architecturally innovative, independent, District of San Jose. This futuristic vision of Silicon Valley is enclosed by an environmental protection dome and run by an elaborate society of robots or if you want to be politically correct-- Androids, Humanoids, HIDU's, and Taskers.

One where she uses her precise good looks to earn a living, play out her own sexual desires, and use its mass platform to figure out who she is, where she came from, and why she is here. There is no question that she is in control.

Listen to James Siriano discuss misogyny in science fiction and going beyond it.

Alia's character follows science fiction's traditional obsession with the story line of a woman created by a man to his romantic, perfect ideal and purpose only to eventually discard her. However, instead of this being the main storyline, this is a minor thread. Our heroine does not plot to seek revenge on a rogue scientist.

There is something greater, more humane, and compelling that drives Alia and often eludes even her. Yet, Alia is no one's martyr.

She consciously chooses to represent the rights of an oppressed group because she believes in the right of the individual to control his/her body, life, and future, but will not flinch when she has to crush someone's nose and drive the bones into their brain to protect her ability to exercise those rights fully.

Listen to James Suriano discuss writing about identify and oppression.

A Future with a Purpose

The reader is led to explore, in this fun and complex futuristic novel, the concepts of consciousness; choice and independence vs. dependence of individuals and groups; the social, emotional, and physical boundaries they create and inhabit; the exploration of purpose through self actualization; and the impact of those paths on personal and global communities.