Nasim Nasr's artistic practice seeks to diagnose and interpret universal themes that resonate with all viewers, irrespective of cultural heritage. Her statement for her upcoming show at Australia's Greenaway Art Gallery, which includes new video, photographic and three-dimensional works, elaborates on this practice:

The repetitive chant of "I believe in love" manifests a non-denominational universalism in belief, both as announcement and affirmation, of a philosophy of compassion, harmony and goodness in a contemporary world of intolerance and indifference.

The words "I believe in love" symbolically and metaphorically fill the cupped hands, which are then passed over the speaker's face and head, much like in the act of washing or blessing, suggesting the essential nature or soul of the speaker in this universal hope for humanity. Living with and exercising a desire to believe in love can unify all differences.

Her work, however, is more complex and, thus, more interesting than the simple profession of "I believe in love." It has to acknowledge and assimilate cultures with different artistic and value systems, the least of which are her own. She was born in Iran and later immigrated to Australia. In fact, it's the struggle to express universal themes in a polarized world that gives the work its edge, its relevance, and its relentless interest.

Below is an interview with Ms. Nasr that discusses these topics a few weeks before the opening of her exhibition.

JS: What was the biggest challenge being female artist/an artist working in Iran?

NN: There has not been any freedom of expression inside that country as far as I know and that is the most important part of any artist's life. Self-censorship is always the rule of operation. When I exhibited my art as a graduating student it was taken down from the walls--I presented artworks showing women's hair and their nude bodies... there was also the risk of being questioned or challenged by government people about the nature of one's artwork: what it meant or represented and so on.

JS: Why and when did you leave Iran and move to Australia? What were your initial impressions of Australian society and culture? How were they different from the society and culture that you had just left? Is this when you begin work that dealt with issues of self-censorship?

NN: I left Iran 2008 and I arrived in Australia January 2009, having been in Kuala Lumpur, Malaysia, in between. I experienced a culture shock going from Iran to Malaysia, then another, bigger shock arriving in Australia. Australia is a very positive, friendly country that embraces new people but of course language and the Australian usage of it was such a shock. The life of women also was a shock - hearing loud voices, laughing, etc., was something I had never experienced before. For example, women drinking out of a bottle of beer... the most important thing that Australia has given me is being to look at the country I come from now as an outsider.

Being in Australia has allowed me to engage in all artistic and personal issues that I could not in Iran. Following attending art school in Newcastle (New South Wales), I moved to Adelaide, South Australia, where I discovered and felt a freedom to express myself in new ways that were very personal, based on my experiences moving away from Iran.

JS: Emotionally, did your family support your artistic practice?

NN: They have always been very supportive, both financially and emotionally, especially my father with his great knowledge about the world beyond Iran and his perspective on the future of things.

JS: You work in video, photography, performance, and installation. What impact does your multimedia approach have on your subject matter?

NN: The subject matter comes first then the platform for its presentation comes from that, for example the moving, visual, sound qualities of the Persian snap, beshkan, could only be presented really via the medium of video (or film), and the ideas of tradition, region, history etc., were best represented through the samovars that make the installation work "Slow Burn". I think my ideas are best represented through the media of photography and video simply given their conceptual nature.

JS: You write that you want to "interpret universal concerns in contemporary society." Why "universal" concerns and why now? How does this fit in with your Iranian heritage?

JS: How would you characterize the difference between the cultures of the West and East and of the society that created them?

NN: That's a book to write. And many scholars are still writing them.

JS: To what degree do you believe that there can be a dialogue between Western and Eastern cultures? Do you think art has something significant to say in response to the Arab Spring?

NN: Art probably has a greater capacity to create real dialogue between two differing cultures than politics or similar, and in my experience, having traveled to numerous international biennales and art fairs, this is something both obvious and quite interesting for me. Art can have much to say when it is allowed to do so and of course this is something we can all see currently from developments in the Middle East and North Africa.

JS: Speaking of dialogues, does your work respond to the ancient art of Persia?

NN: Not so much respond to as incorporate cultural/traditional elements of the ancient art of Persia, for example daf (Persian instrument like a tambourine), samovar (Russian/Persian, an ornate, slow tea brewing thing made out of silver/steel etc. very old world and beautiful), and the paisley logo (botteh)

JS: How did you develop your stated themes of cultural identity, especially that of women's rights?

NN: I believe identity can be a transient invention--when one person moves from one culture to another. Most interestingly for me when I used to be in Iran with all its restrictions, I drew nude bodies (in private). However, when I came to Australia I started to look at 'freedom' differently and, with my initial practice, I began photographing covered up women at a nude beach! I also began to think about this issue of (individual and) women's rights--perhaps that in the West, and Australia, that people either took them for granted (in comparison to other countries), or expected them, that perhaps they didn't know how well off they were while aggressively demanding those rights. It's a complex issue and I am in this position where I have the experience of both repression and 'freedom'.

JS: If there were one continuous thread in your work, what would it be?

NN: The complexities of all contemporary issues between East and West, because I am from one and now in the other, much like many other people, and less so artists. This both informs my life and my thinking, and, ultimately, the reasoning and creation of my artwork. Interestingly, what one might see from my work, from close-up, from afar, given my background of repression and restriction and now being in an environment totally the opposite, is that my work presents the human body, or the person in my work, still being 'covered', there are no faces, just hands, just voices or sounds made by them, no faces, no obvious 'identity' as such... this is not a form of (still) self-censorship, just simply the desire to present an escaping of identity.

JS: You write that identity is "transient"? What "identity" do you mean: social, political, economic, or cultural? And why or how is it "transient"?

NN: Social, political, economic, cultural--all of them. You completely have a rebirth, a new start in a new country when you are committed to staying there and leaving the other.

JS: How did you conceive of the exhibition? Is it a continuation of prior projects?

NN: The exhibition at Greenaway Art Gallery in Adelaide is the result of an invitation from director Paul Greenaway. He presented my video works ("Beshkan" and "What to do?") at Art Stage Singapore in January this year and it was very successful. I am showing new video, photographic and three dimensional works that continue recent projects, both extending those ideas while presenting new formats--traditional cultural objects such as daf and samovars, which become physical platforms for this presentation.

JS: To speculate, what would be the reception of the same work were it to be shown at a similar venue in Iran?

NN: Quite probably these works would not be shown at all. So hypothetically if they were shown it might pose problems for the artist and the gallery from the authorities. Now it would be very hard to say what the public/art response might be. 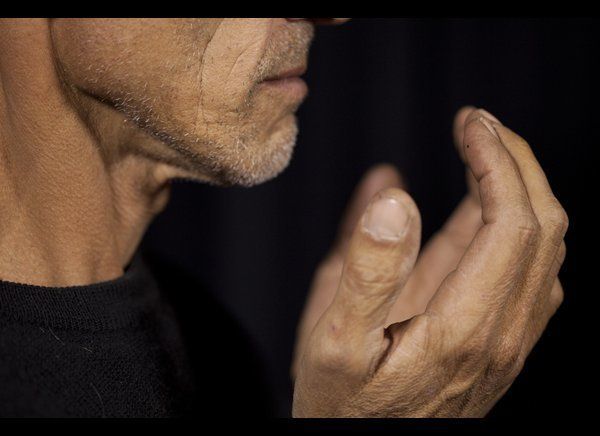