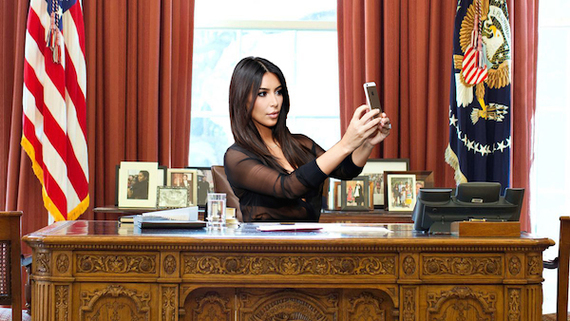 Shortly after Kanye West declared for the 2020 Presidential bid at the VMAs the other night, Life in the Boomer Lane arranged an interview with our future First Lady.

Ms. Kardashian, your husband has declared for the 2020 Presidential bid. Was this a joint decision between the two of you?

I don't partake in marijuana, so Kanye smoked the joint himself.

To clarify, did both of you discuss his run for the Presidency?

Of course. We discuss everything. Kanye is the most brilliant man I know, but he often needs to run things by me. Being President is important. I think it takes a lot of time out of your daily schedule for all the meetings and stuff, to be President, right? So there's time management to consider. I think there's other stuff, too.

If you were First Lady, what issues would you tackle?

Oh, there's so much to do. I know that there are people who think that all I care about is clothes and showing off my boobs and butt. But I care about so much more. Did you know that people go to bed hungry in this country? And there is no reason for that. If I'm First lady, I want people to love their bodies and not starve themselves. Everyone should just eat as much as they want.

Are there any other issues you would tackle?

Children. I care so much about them. Did you know that there are homeless children in this country? Somebody told me that, and I couldn't believe it. Somebody should be returning those kids to their homes. They shouldn't be running around loose, like that.

How about global warming? Would that be an issue for you?

Wow, I can't believe you asked me that right now. Global warming sucks when you are pregnant. Seriously. I'm sweating like a pig all the time.

Oh, I do know about that, and I think it's awful. Climates should stay exactly the way they are. Packing is tough enough, without worrying that the climate will change when you get there. Is anybody doing anything about that?

Oh I love to travel. I love when the Family gets a big house somewhere really cool and then we all take lots of selfies.

I mean, as First Lady, where would you like to go?

Oh, that. It's so exciting to think about. Remember when I went to Armenia? That was so fun. Before I went, I never even knew it was an actual country. I mean, I knew my dad was "Armenian," but I thought it meant that he was like a veteran or something like that. But a country? Wow. Who knew? So I'm thinking there are other places like that, places I don't even know about. It's thrilling, really, to think about.

As First Lady, what kind of legacy would you like to leave?

Legacy? I don't think I'm familiar with that word.

Legacy is what you leave to people after you are gone.

But I have a will. Do I have to leave other stuff?

In this case, we are talking about something other than material goods or money. As First Lady, what you do can impact on the world for all time.

Aren't I doing that already?

I suppose you are. But isn't there some way you'd like to change something that would impact the world after you are gone? Something other than clothing or reality TV?

Does the Presidential seal have to stay like it is? Can we change that? It's sort of creepy-looking, isn't it? I have some ideas. And put Kanye's face on all the money. That's another thing. That would improve the economy, I think. There's probably more stuff.