It may be unseasonably cool this summer in Los Angeles but for Peppur Chambers, writer, actress, co-founder of Three Peas Productions, and founder of The Brown Betties, it's been a scorcher. She just closed two plays. Her production of "The Build UP" was set in a private residence; and her "Dick & Jayne Get a Life" was awarded an extension at the Hollywood Fringe Festival. Though she's had a busy couple of months, this appears to be just the beginning.

JS: Your two recent plays, "Dick and Jayne Get a Life" and "The Build UP," show how preconceptions, miscommunications, and misunderstandings can derail or threaten to derail relationships. Why now do think these are important themes, especially in theatre?

PC: Oy. We are very busy "presenting" ourselves these days, sending in the Hologram of ourselves instead of being present, available, responsive and aware. I'm not sure that people necessarily want to stop doing that. I think we should. When we're not present, mistakes happen; we miss what someone said or was trying to say either verbally or nonverbally. We're not observing and engaging fully and that's not good for any relationship. With theatre, you literally have a captive audience and it may be one of the few times where people turn off their cell phones (sometimes) and are forced to listen and engage. I use my voice in this medium to get this message heard.

JS: Are these situations and characters, particularly the female leads, based on personal experience?

JS: How much of yourself do you put into these works?

PC: I put every ounce of myself into my work. So far in my career as a writer, I still write what I know because I do that best. I pull from my experiences, my pain, my fears and ultimately what I think is funny or strange or weird about something that I know to which many people can relate. Like in Dick & Jayne, they find love at Ralph's grocery store at 2am. Who hasn't been at the grocery store, sometimes feeling like a huge loser, when there's either people there trying to further a good time or there's other weirdos like you rummaging through rows of cereal bars?? It's distressing ... and funny! In The Build UP, Kaliegh is trying to sell her eggs in order to get money to fund her film. I know many women, including myself, who've thought to sell their eggs for cash. It's crappy to be in that position, but when you stop crying about the desperation of it, it's kinda funny. Same with Brown Betties, how many times can you keep making the wrong relationship choices until you realize you're the one doing the wrong weirdo stuff and you need to change?

JS: As you sit down to write, what comes first, the characters or the plot? Do you have any writing rituals?

PC: Characters speak to me first. Rituals? Coffee, wine and Kleenex for the part when I always start crying.

JS: "Dick and Jayne Get a Life" is very funny, the unlikely story of two oddballs who find love. "The Build UP" is more serious. At this point in your career, what do you prefer to write, comedy or drama? Which one do you think reflects your true writing voice?

PC: Gosh. The more painful something is for me, the funnier it gets. So, I truly love to mesh both; my forte is weaving comedy into dramatic stories. Also, because I'm an actor, too, I relish writing moments where an actor can truly shine emotionally and physically, so I like to give my characters as much depth as possible and those moments are usually somewhat dramatic.

JS: Besides strong characters, an interesting plot, and a satisfying conclusion, "The Build UP" is set in an actual residence. The action takes place throughout the house, culminating in a concert on the roof. What boundaries did you want to push here and do you think you'll do something similar again?

PC: Because the audience is a voyeur in this piece, at first I thought, should I go all Andy Warhol or something and have my actors having actual sex..?! That would make us a porn, so I didn't do that, but I did write in the type of private moments you have where you're sitting there doing nothing but thinking. Watching someone do that, especially when only two feet away from them, can be incredibly compelling and uncomfortable if the actor is being honest in the work. (The Private Moment was an exercise in my acting classes at Black Nexxus in New York; incredibly valuable exercise as an actor and as a writer.) I wanted to push the boundary of at what point do you as a participant become transported into the story; in The Build UP, sometimes you're standing right next to the actor, so you're very much one with that actor and you're kinda in the play at the point, too. Yes, we're hooked on site-specific theater and being in the private residence. The Build UP was conceived by Shakir and we're looking to further this story to a part two situation which is tentatively titled, "The Break DOWN", and will start on the roof and travel downstairs.

JS: "The Build UP" seems suited for a TV series. Different cameras would seamlessly move the action from room to room and the lead female character has the complex personality to be a TV series character. Do you plan to use the story as a pilot?

PC: Yes, yes, yes! Alex Dawson is thrilling as Kaliegh as is the rest of the cast (Chris Mollica, Daniel Ball, Tina McDowelle, Taro Morita, Erica Peeples and Danielle Lewis). We are developing The Build UP now and looking for partners to come on board to getting this to an outlet like Netflix, Hulu, CWSeed, Yahoo! Screen or the like.

JS: How did the idea originate to form Three Peas Productions?

PC: My brothers and I are idea people with different sensibilities in our consumption and approach to entertainment. We like theatre, music and film. I wanted to capitalize on that and I wanted to bring my stories to life with the two people I trust the most. My brother, Shakir, loves music and festivals. He wants something like Lollapalooza one day; I want to help him succeed in that dream. Our brother, Darnell, wants Shakir and I to be secure and have food on the table and a place to sleep so he doesn't have to worry that we'll have to come live in his house one day. We needed this production company to be our dream launcher/Darnell stabilizer.

JS: Will your Brown Betties Productions retain its separate identity?

PC: Yes. Brown Betties® is now a trademarked brand, has its own set of entertainment products and offerings, and is a growing business on which I've been working since 2005. It is tent-poled by the dinner theater show, 'Harlem's Night: A Cabaret Story" which stars the Brown Betties (Myself, Marliss Amiea, Keena Ferguson and Danielle Lewis). What do you hope to accomplish with the company? With Three Peas, I want to tell stories that mean something. I want to work with amazing actors who tell the stories and whom I hope will be recognized as the stars they are. And I want to make sustainable money telling those stories. With Betties, I want to create a successfully branded business similar in structure to Playboy Enterprises and American Girl with a literary presence that branches into film, TV and real estate.

JS: And why did you move, first, from Wisconsin to Chicago, New York and then to Los Angeles?

PC: I moved to Chicago because I wanted to be a Chicago Bulls "Luvabulls" Dancer; I discovered that Paula Abdul became famous as a Laker Girl, so I figured I'd do the same. I had to try out three times before I finally made it! Well, I was a Luvabull and I didn't become famous, so I moved to New York, where I always knew I wanted to live so I could walk really fast, bump into people and eat bagels. I started acting in NY, so LA became the next natural choice because I wanted to do film and TV. And now, here I am! I call this my Big City Tour and hoping I have an international stop somewhere along the way.

JS: What's it like to work with your brothers?

PC: I was telling a friend last night, that as the oldest, I like to think that I know everything and that my brothers should listen to what I say and sort of do what I say, because when they were little, that's how things went. Well, we're not little anymore and sometimes there is conflict. The beautiful thing is that we respect each other tremendously and that allows for growth, communication and creativity. They respect my expertise, as I've been producing on my own for several years, and I respect their approach to business. This combination helps us succeed. Plus, I love them so much that I enjoy leading them and I know they won't let me fail. We call ourselves The Triangle, but in some ways we're a circle.

JS: Growing up, were your dreams a logical extension of what you're doing now?

PC: I think so. I wrote my first play at 12. I've always loved to entertain people where I take the focus off myself but still really saying, "Hey, look at me!" So, I think I'm logically extending currently.

JS: What in your background prepared you for you've done so far?

PC: Having to work for what I wanted. Being the only different person in an environment full of people who looked the same and having to adjust and still thrive in that environment. Being a competitive athlete. Having divorced parents. Spending 6 months in Arlington, TX. Graduating from Marquette University. Being a Chicago Luvabull and a Milwaukee Bucks Dancer.

JS: How much further do you want to go?

PC: To infinity and beyooond! I want a legacy, an empire that I can hand over to my niece and nephew IF they want it.

JS: Were your parents supportive of your individual and collective efforts?

PC: Overall, yes. Our parents have always pushed us to be the best at what we do; to have a strong work ethic and have concrete morals. They pushed education first and entertainment and sports, second. That has always been an incredible base of support for me, personally.

JS: What else do you have in the works?

PC: I'm flying to the moon, soon. Actually, one of my biggest dreams is coming true soon, and that is to have my novella, "Harlem's Awakening", which is the Brown Bettie pre-story to "Harlem's Night", published with Black Hill Press. My dream after that is to have that novella produced as a feature. I've already written the script, so just waiting to begin the next phase with financial backing that is forthcoming from somewhere. And, oh yeah, a family of my own would be nice to work on also. 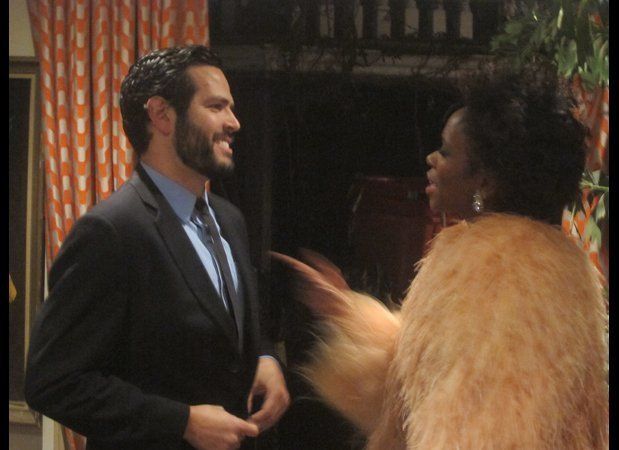