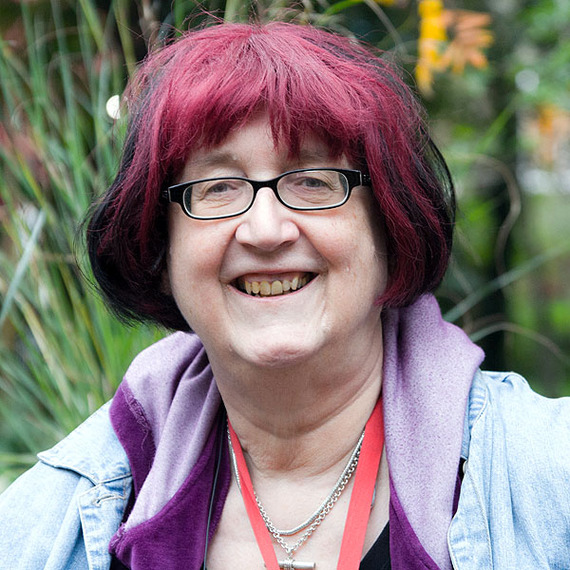 Roz Kaveney is one of the most incisive literary multi-hyphenates at work today. Whether she is writing about the cultural impact of TV shows like Buffy the Vampire Slayer and Battlestar Galactica or writing critically-acclaimed novels and poems or campaigning on behalf of the transgender community, where she is revered as one of its most prominent voices, Kaveney has always been a pioneer. Here she discusses her latest novel, the excellent Tiny Pieces of Skull, which is published by Team Angelica Press.

In the book there are many and varied trans characters and so transwomen's experience is centered and normalized. Was there an ideological intention there, or did it more come out of a fidelity to a real social network?

The subtitle is "A lesson in manners" which partly sets the agenda that this is going to be social comedy. It is also literally true because the way the book is written -- and this was something I felt strongly even back in the 80s -- was that the way to write about trans people was to write about trans community and never to use the word and absolutely to write in accordance with the position that trans women are women. The standard trans narrative -- especially in fiction -- is to write about trans people in isolation from each other; even in my teens, I came out by finding community and I wanted to produce a fiction that dealt with that. And yes, I was thoroughly fed up with the standard cis narrative about trans people in which we are interesting set dressing -- victims of crime or tolerance. There absolutely needed -- still needs -- to be fiction that centers on trans people and now we are getting that fiction and this book I wrote so long ago becomes publishable.

Tiny Pieces is entirely free of self-pity. As with Charles Bukowski's alter ego Henry Chinaski, was telling the tale through Annabelle a way for you to deal with certain difficult experiences?

One of the key quotations on the imaginary cork-board in my head is "The world is a comedy to those who think and a tragedy to those who feel." Back when I was writing Tiny Pieces of Skull, I wanted to reject the victim narrative. Not that I was ever, exactly, Annabelle, but subsequent to the experiences that Tiny Pieces of Skull deals with, I had some inconvenient medical stuff I will write about someday; I survived that by cultivating the icy splinter in the heart of the true artist... It's also a stylistic discipline -- avoids self-sentimentalizing. That's the reason for my fascination with form.

Sarah Schulman said Tiny Pieces has the feeling of classic noir in its wit and hardboiled tone. Your other writing is often highly referential; was that an intentional nod to genre?

I grew up admiring Hammett and Chandler, and later on the wonderful Sara Paretsky and indeed Sarah Schulman herself -- noir has always been one of the best ways to write moral fiction and political fiction because that is what Hammett created it to do. I also liked the idea of combining two sorts of very cold-blooded fiction -- the English person out of their depth in a foreign country that Evelyn Waugh created in some of his better books, and the "down these mean streets" narrative. Annabelle is simultaneously hapless and capable of being a sort of hero.

Obviously I am fascinated by genre -- my critical books on science fiction and high school film are all about how playing with tropes and rules gives you freedom. My big fantasy series "Rhapsody of Blood" is a deliberate subversion of a lot of genre tropes in the interests of a queer anarcho-feminist agenda. A lot of my poetry, and especially my work with the love sonnet, is a queer reclamation of many centuries of hegemonic straightness -- I love Donne but I decided a few years ago that part of what we all need is a lot more queer love sonnets...

The book is framed by ciswoman feminist Magda's ambivalence about trans authenticity. Are we still mired in these debates or do you feel we're genuinely moving past them?

It's all still going on. I write about it so much I am not going to rehearse it here.

Was revisiting a manuscript you'd set aside thirty years ago painful or challenging?

I think I'd say "fascinating"....Here I was, a published critic, poet and novelist in my 60s looking back at the book I had written in my 30s about my 20s and feeling weirdly close to both those women while no longer entirely being the same person. Tiny Pieces of Skull was one of the first things I ever wrote and yet it didn't particularly feel that way -- I could see why I had made various structural choices and most of the time I endorsed them. I revised the manuscript thoroughly but with a very light hand -- there is only one completely new episode. A couple of scenes have been adjusted to be slightly truer to my memory of what happened -- the book talks a little bit more than it used to about dysphoria because I'd talked to friends in their 20s about it.

Tiny Pieces centers on trans sex-workers in a non-judgmental way. Have there been any negative responses to this?

Not yet. I am sure it is coming but sufficient unto the day...

Trans people are really coming forward; why do you think this upsurge is happening now?

There are a lot of amazing young trans people of all genders making their way in the world -- and the older generation have been slogging away since the Seventies to make things achievable. I wish more of those crucial women and men like Sylvia Riveir and Lou Sullivan were around to see it.

What are you working on now? What's next for Roz?

Finishing "Revelations -- the fourth volume of Rhapsody of Blood; completing my translations versions of Catullus; putting together more poetry collections. Possibly writing a sequel to Tiny Pieces of Skull about what Annabelle did in the Sex Wars of the 80s...

Tiny Pieces of Skull by Roz Kaveney (Team Angelica Press) is out now. You can connect with Kaveney on Twitter.