With the launch of "The New 52," DC Comics has proven that they are willing to shake things up at a moment's notice to create the best stories they possibly can. They're trying everything they can in an effort to be the most dynamic comics publisher in the world.

Word came to me late last week that a brand new team will take over one of DC's biggest characters, Superman. They announce officially tonight, but we have the scoop in advance.

Scott Lobdell will be taking over the writing duties and Kenneth Rocafort will take on the pencilling.

I got a chance to talk to Scott Lobdell about his upcoming run on Superman. For a guy who is a sometimes stand-up comic, the answers are equally hilarious and sometimes vague. (You can read the full interview at Big Shiny Robot!) 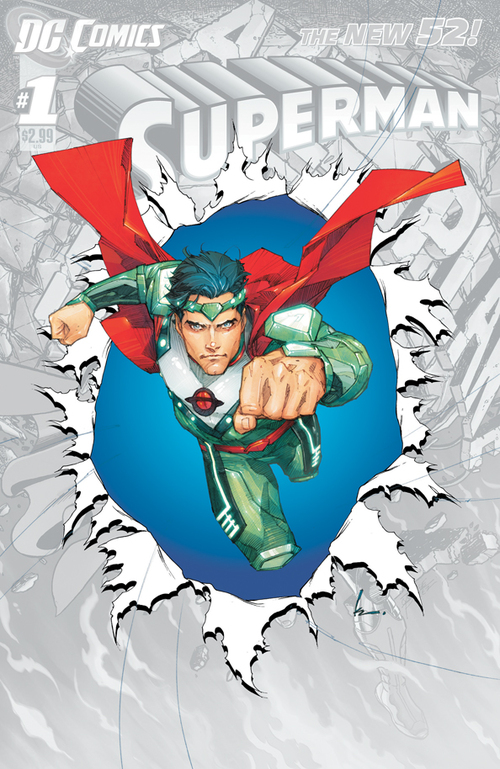 Bryan Young: So, are you guys on this title for the long haul?

Scott Lobdell: Well the last time I was on a flagship title I stayed on for about five years! So trust me when I say that I am totally committed to writing Superman for at least twice as long.

BY: So you have long-term plans for the book?

SL: I don't work that way. Just like I could not have imagined a year ago that I'd be writing the world's most famous super hero... I like the stories of the characters to mirror the same sense spontaneity and unpredictability that define us in "real life".

Yes, I turned in a 25 page pitch for the series that examined every aspect of Superman, his friends, his enemies and over a dozen story ideas... but I've found over the years that the series often takes on a life of its own once the characters and the conflicts and the interactions start to show up on the page.

BY: In an economy where readers are being forced to stretch their comic book dollar, how is your Superman going to distinguish himself from the other Superman books?

SL: Forced? I don't like to think we're forcing anyone to buy anything... I like to think we're providing readers with an opportunity to share an epic story rooted in a character that -- some seven decades later -- stands head and shoulders above all the other super heroes that have come after him.

As far as comparing Superman to the other books, I would say apples and oranges -- if those apples and oranges had a bright red "S" on their chests! Grant [Morrison] does that great retro-freshness he does and Geoff [Johns] gives us an unbridled action movie every month -- I'm determined to give you a Superman that surprises you from issue to issue.

That's not hyperbole, either, when I finished the plot for the first issue I gasped!

And then I gasped again when editorial approved it!

BY: Will you be carrying on the continuity, or pulling a new New 52 and tweaking things slightly?

Let me say that there will be tweaking aplenty -- but I think it is going to be in terms of tone and attitude and not in history or continuity. We have no plans to reveal Lois is Superman's daughter from an alternate future or that Perry White is actually an amnesic Jonathon Kent who has been in witness protection.

But yes, you'll see from the very first issue -- in fact, even in the Annual and the Zero issue before it -- a Superman that is going to feel very of the moment.

BY: What is your favorite thing about the Superman character and how do you guys hope to bring that to book?

SL: I like the sheer uniqueness of Superman. The fact he is stuck on a planet of six billion people -- who he is the self-appointed champion of those people -- but that he will never be one of them? How awesome is that? If it were me I would probably take a deep breath and fly into space and find a planet where people were more like me (could you imagine what that would look like) -- maybe a planet that wasn't so reliant on what I did every day. But not Kal El. He's there day-in and day-out putting his life on the line for a people that alternately put him on a pedestal or steer clear of the most famous alien on Earth.

Again, there are over six billion people on the planet, and only one Superman.

(And when you consider that the other two "supers" are a girl who thinks you've gone totally native and a clone of you who was created to be the world's greatest living weapon -- he has more in common with the rest of us than he does with his own 'family'.)

That said, too often Superman is seen by readers as "too perfect" -- that he always makes the right choice. But the truth is, every choice has consequences and when all the choices you make are super choices you have super consequences.

The very first issue is going to see the results of several choices which are going to have ramifications for months to come!

BY: Do you have free reign to modify the mythos as you go? Or are you tied into what we currently know now about Superman in the new 52?

SL: I will have to let you know. So far I've pitched some really out there takes and stories and no one has asked to reel it in -- so I'm note sure what my limits are!

Even when I was writing the pitch I would laugh at myself for pitching a particular idea -- knowing full well they would never let me do this to Clark. But then they said "Congratulations" without ever adding a "...but, of course, we're not going to let you do that, Scott!"

So, so far, I guess I have free reign... but maybe only because I haven't come to the end of my leash!

BY: What comic books are you reading currently that people should check out?

SL: I am a huge fan of team books and I find that Teen Titans is maybe the newest and freshest take on teen super hero books on the market today. And Red Hood and The Outlaws is every bit as amazing and anarchistic as the fans proclaim it is -- I would place it in the top five of the industry's best books!

In fact, I am willing to say publically that if you adore Red Hood and The Outlaws (and, hey, who doesn't?!)... you are going to love the little red boxers off of Superman!

(It's important to note that Lobdell and Rocafort are the team behind Red Hood and the Outlaws.)

On that title, Lobdell saw some level of controversy for turning Starfire from a female role model into a sex object. Despite that change, the book is well-written and funny. It follows the exploits of Jason Todd (the Robin that died) and his band of misfits as they do "good" around the world. He's also been writing Teen Titans, which is the only book that features Tim Drake (the third Robin and current Red Robin). He has completely different writing voices appropriate for each of the books, so him writing Superman will come with true surprises and shouldn't be raising any red flags.

DC Comics will have more details later today about the book.

Bryan Young is the editor of the geek news site Big Shiny Robot! and the author of the brand new, critically acclaimed sci-fi novel Operation: Montauk.