Things that have dropped off the radar since the RNC:

1. "Barack Obama is Just a Community Organizer" (due to counter-point: "So was Jesus") 2. Possibly John McCain (see: Obama debates... Obama?) 3. Any coverage of the police brutality against journalists and protesters who were raided, some arrested and prevented from protesting the RNC

These items haven't gone unheard, however, with Ted Leo, singer and songwriter currently known for his work with band the Pharmacists. Especially not #3.

When word of the RNC violence and arrests traveled east, Leo and the band decided to record two new songs, Paranoia: Never Enough and Mourning In America, plus two cover tunes I Got Your Number (originally by Cock Sparrer) and Nobody's Driving (Amebix). These four tracks comprise Rapid Response, an EP created to bring awareness and financial aid to the people affected by the police brutality in Minnesota -- with all proceeds going directly to Food Not Bombs Minneapolis, Democracy Now and Cold Snap Legal. I chatted with Leo about life as a politically-motivated songwriter, his feelings about the RNC violence and, of course, pigs in lipstick.

Rapid Response is available now for an exclusive window via Touch and Go Records for $4.00, and will soon be available on Itunes.

Have you always been politically active as a band?

Yeah absolutely. It's something that I sometimes have to struggle to get away from, at least topically when it comes to songwriting. It's kind of like, I hate to make it sound so cliché: but I literally grew up being formed by punk rock and topical songwriting. It's at the core of what I do. It's hard for me to not write that way.

Do you sometimes feel like you have to reign yourself in and not write politically-motivated lyrics?

No, it's just that sometimes it can be stifling as an artist, especially when you want to be able to say something and you find yourself confined to the same issues. For example, just thinking about the last five, six years, there's barely anything new to discuss politically. There's this latest thing we did with what went on the RNC, but in a broad sense, time and time again it's the same series of issues because we have had the same administration for eight years. You find yourself struggling to see how you can address this again. Do you think it's the musician's place, especially one in the public eye, to speak about and engage youth culture and activism via their work?

Absolutely. Is there a place? There certainly is. It blows my mind when people suggest that there isn't. It's not as if art in general doesn't have a millennial history of exactly this sort of thing- the idea that anyone, a musician, should stick to pure entertainment is ridiculous. It's absolutely fine if that's what a particular artist wants to do, gods knows there is also certainly a place for the songs. But there's plenty of immediate social commentary in Dante, and that's going way back...there are a lot of people who just say "shut up and sing." But the idea that art should somehow be separated from commentary is completely ridiculous.... 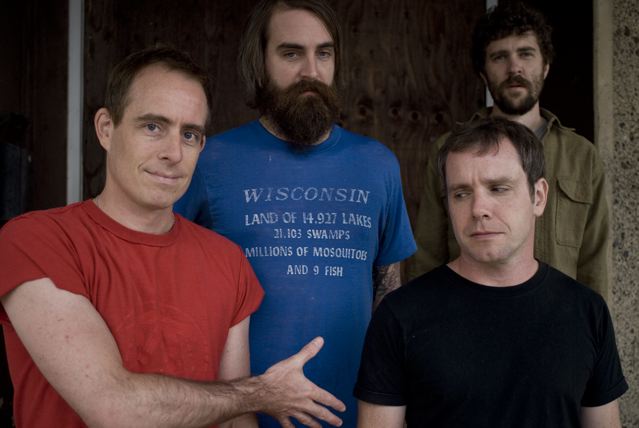 Ted Leo and the Pharmacists

What was it about the events of the RNC that put you in such haste to release this EP?

There are a number of things, but at the most basic level it was a moment of being fed up, with all this violence against our own citizens by our police force, coupled with the context of a violent republican convention. It just really made me angry, and this is what I can do. I can't change the world, but I can write a song and hopefully raise money for people who need it. So that's what we can do and we chose to do it. More specifically there were two things that really sent me over the edge, one was a video that I saw of this girl getting pepper-sprayed repeatedly by a police officer and all she was doing was matching pace with their march and holding out a flower. It's actually making me physically agitated as I talk to you right now. That paired with Sarah Palin's speech where she essentially made fun of Barack Obama with her "reading them their rights" statement. Of course they should be read their rights - that's in the constitution! And then you go to the arrests...this is not supposed to happen in our country. But these people have behaved for years and years with no accountability, they can get away with everything they want. If they don't think that that filters down to the cop who is pepper-spraying that girl, I really think it does. It created a cultural zeitgeist where lying and bullying is rewarded.

It's true in that we tend to award that type of Republican strategy as good politics, when people come out and cleverly position lies--we applaud good game playing, sneaky rhetoric. That's the discussion, not that the facts are incorrect.

Yes. And another after-effect is how that plays out in the general population. I really think that you are seeing a rise in thuggish, jock-ish bullying. It makes me fearful of having a child -- that's how upset it makes me. Let's talk a bit about the songs you wrote as a reaction to what went on at the RNC. What was the process of putting them together?

As that was happening and we were getting news of it [the band] just all agreed that we wished there was something we could do. The first thing that you think of in a situation like that is, let's put on a show to raise a little bit of awareness and some money. But it was tough schedule-wise and it occurred to me that it only appeals to however many people are there and then it's over. Whereas if we created as document of our lasting feelings, it will exist forever and be perpetually available for people to be able to contribute to the causes we wanted to support. So I just woke up one day and wrote a song really quick. Went to practice, set up our situation to record it, and it's as simple as that. On your Web site, you link to an article related to domestic spying when a viewer clicks on one of the songs.

It's just another example of a reason why we can never be too paranoid. And the songs will be available on Itunes?

Yes, but the money will continue to go to the beneficiaries. It's amazing to see how the internet has really changed how people interact with politics, and certainly where the music/political intersection is concerned.

I think it's pretty much 100% a positive development, in every way. It allows disinformation to spread -- but it also allows real information to spread. Over the past few years we've seen what a useful tool it is. Immediate community building, not just chatting on a message board, but organizing.

So is it safe to say you endorse Obama?

I absolutely do, and I'll tell you this. I am only a registered Democrat so I can vote in their primaries -- I see enough of a difference in the sides to know which way I want to vote, but I am usually dissatisfied with anyone who occupies public office. Having said that, there is a lot about the centrist lead of whoever is running for national office on the Democratic ticket to make me perpetually frustrated with him or her. But I do endorse Obama with some enthusiasm. That was a pretty lame endorsement, but I am actually pretty excited about him. In these next days, what are you going to be doing to get out the vote?

We are going to be on tour-playing in Bloomington, Indiana on election day. It's a matter of speaking to who we can from night to night, trying to get different groups out and connecting politically with the people who will be at our shows.

One last question. What's the different between a hockey mom and a pit bull?

Don't say lipstick (laughs.) But can I tell you a joke of my own? If anyone asked me how I feel about lipstick on a pig in context to how they felt about Sarah Palin, my answer would be "pigs are very intelligent animals. I wouldn't denigrate them by comparing them to her."

Ted Leo and The Pharmacists are on tour now.