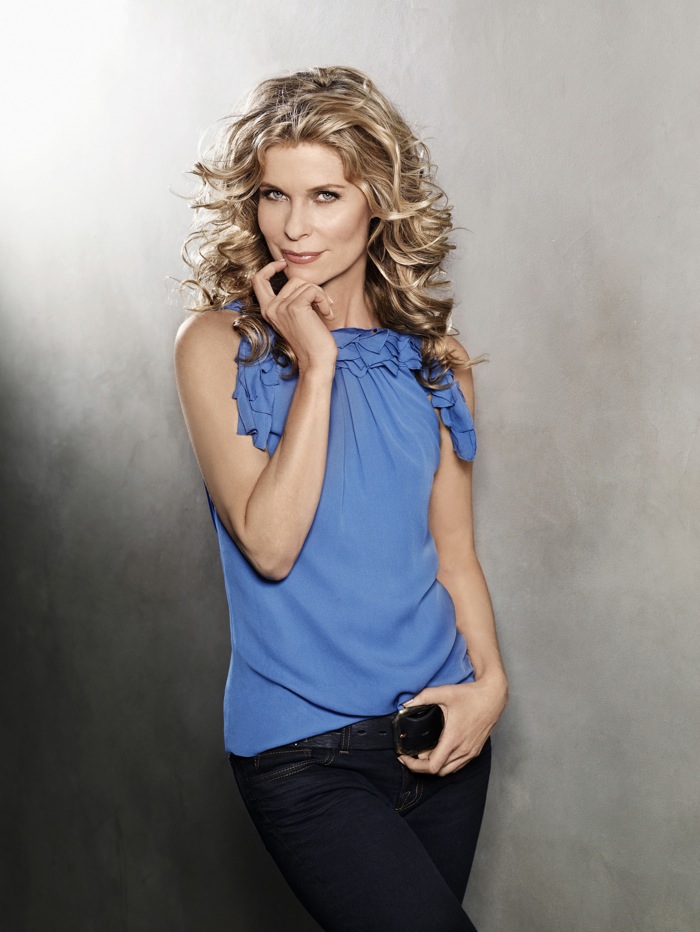 Since the revelation that there were five additional cylons in the Battlestar Galactica universe, fans have been endlessly debating their identities. I should know since I've been watching from the beginning. We learned the identities of four of them, but the fifth has remained a mystery...until this season's opening episode. Kate Vernon plays Ellen Tigh, wife of Colonel Saul Tigh (Michael Hogan). Ellen has always been a wild card, seducing the crew, sleeping with cylons to get information and save her husband. When Saul found out what she was doing, he poisoned her. To the shock of BSG fans everywhere, the last shot of the show revealed Ellen as the fifth and final skin job. (For those of you who don't know, that's a cylon who looks human.) Vernon has known she was the final cylon for two years and kept the secret the whole time. In next week's episode, we get to see Ellen's return. I just got a chance to speak with Vernon about keeping the secret, where Ellen goes from here and whether or not she actually uses "frak" in everyday life.

What was your reaction when you heard the news?

Well, when Ron told me...I had called Ron periodically after they'd killed me off. You know, I was hard pressed to let this role go because it was such a great role. So I kept calling him every few weeks saying, 'Hey, am I coming back in a flashback or a fantasy sequence? I just want to know.' And the last time I phoned him, he stopped me mid-sentence and I thought, 'Oops, I've gone to far here.' And he said, 'Look, I've just pitched a story line to the network that would feature your character heavily. If they green light it, you'll come back heavily. If not, then I'll write you in a few more episodes.' So I thought, 'Holy cow, what does that mean?' So he caled me a week later saying that the network had green lit this story arc. And I thought, 'Oh this is incredible.' I didn't have a clue that the conversation would then take this other turn. Oh, you're the fifth cylon. I had no clue. So I was flabbergasted. You know? I couldn't believe it. I was in a state of disbelief. Me? (laughs) He assured me so thoroughly since they'd killed me off, that I was not coming back as a cylon. I was completely stunned.

Did you tell anyone?

I told my manager. I told my agent. I kept it really really tight. I mean, I was so afraid for this secret to get out. I would not want to be responsible for ruining such an anticipated moment.

Did anyone figure it out?

There were a few people that had very strong ideas that Ellen would come back and that Ellen was the fifth, but it was easy to dispel those ideas. When my friends would say, 'Why are you going back to Vancouver? Why are you working on Battlestar?' I would say, 'Well, I'm going back to torture my husband. I'm going back as another fantasy sequence.' I played up the fact that my husband has all this guilt for killing me. It was easy actually...to totally avert any thoughts. And then I would say, 'Oh yeah, I'd love to be the fifth cylon. Who wouldn't?' I don't know if anyone really figured it out...but there are people out there today still, who are in denial that I'm the fifth cylon. They don't believe it. 'No, no. You see, Saul has been hallucinating her and maybe this is just a hallucination. No, no, no. It can't be Ellen Tigh.' It's pretty funny. 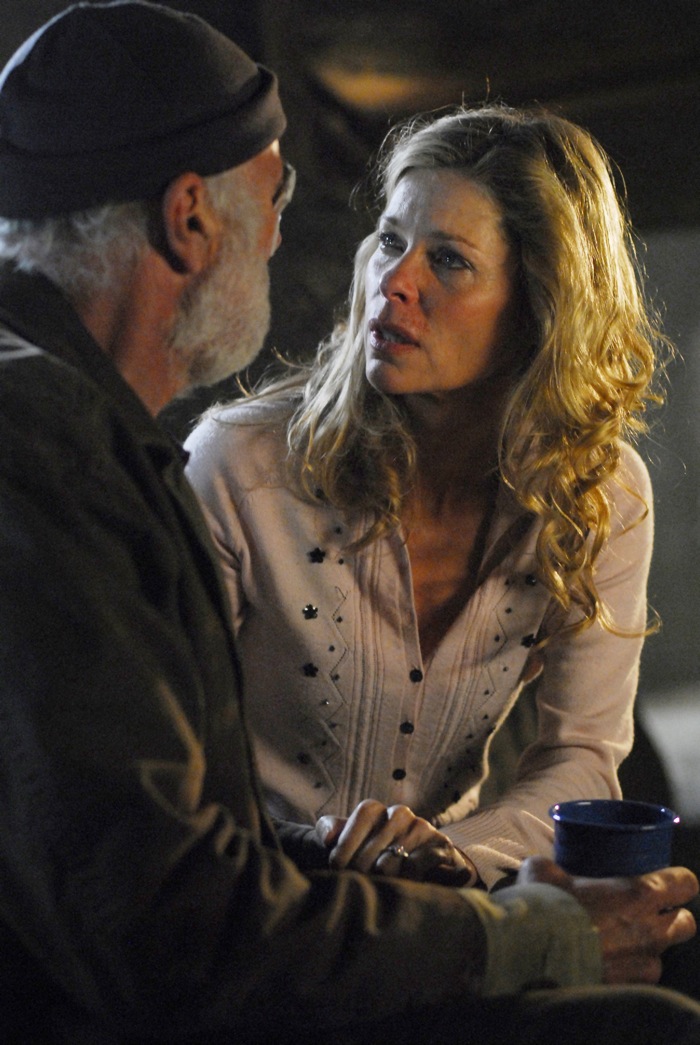 How much did you know, once you found out you were the fifth? Did Ron Moore just tell you that or did he tell you anything else about how it was going to end?

Oh, he gave me the whole scenario. I was stuck in traffic. 4:30 traffic from the West Side, going north on Sepulveda. So you know I was going 2 mph. Nowhere fast. And so we had a 45 minute conversation about what the story line was going to be. How he was going to introduce my character, what my character was going to mean. The shift in my character. He told me everything! (laughs) It was fantastic. It was so much information. It was so hard to hold it all.

The other cast members have said they didn't know right away. Did they bribe you with gifts and fine jewelry?

(laughs) No gifts, no jewelry. That would have been lovely.

You had a bit of a Lady Macbeth story line. (Ellen tries to convince her husband to take over the ship at one point in the story.) Is that something we're going to see revisited? Since they're both cylons? They could take over...

Right. I would say the Lady Macbeth scenario has seen it's day. No, Ellen comes back...I don't want to give away anything...she's much more realized now in terms of who she is. And with that she carries an important agenda and an important intention.

No. I mean, that's the word from Ron. No. At that point she was a sleeper cylon. The recognition and awareness of who she is had not been downloaded. It had not been turned on. That part of her was dormant. She was a civilian. A human being. There was no, at that point, memory of her being a cylon. 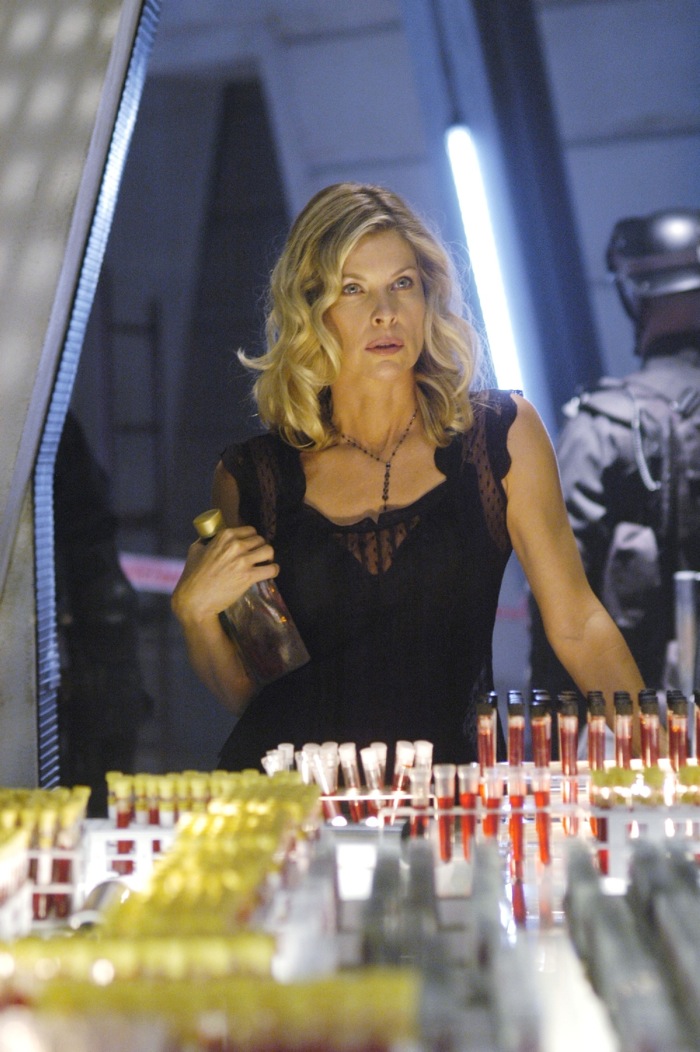 Way back in the series, when Baltar (James Callis) tested Ellen's blood, he said she wasn't a cylon, but it was indicated that he might have been lying. Do you know if he actually found anything out or if that was just left open?

That was a suggestion that left it open for the writers. Because at that point I was only going to be on the show for 3 or 4 episodes and that was it. It was more about stirring the curiosity and stirring up options. And the wonderful way that Ron writes, it's very much a developmental experience and he just writes and it flows out of him. He has an idea, of course, of where the story is going to go. but he allows for the moment to moment discovery to happen. So leaving the possibility of Ellen being a cylon open created a sort of ominous threat. It created an element of danger. Could she be a cylon? It's nice that it wasn't buttoned up, leaving it an absolute no. Because Ellen walked into a room and nobody knew what was going to happen. There was always trouble following her or that she would stir up. The girl couldn't help it! (laughs)

Ellen is such a great character.

Oh, she was so much fun to play, which is one reason why, every time I picked up the phone, I took a chance...hey, honestly, I adored playing this role and I really didn't want to let it go. And I took the chance and called Ron several times and asked, 'Hey, am I coming back?' And he always said yes. As a fantasy sequence. So I thought, 'Well, I'm going to pick up that phone one more time.' And then I got this tremendous news.

There's going to be a Battlestar Galactica movie...will you be in it?

There has been a movie and that's been discussed. It's called, "The Plan". We shot it. And I'm in it. It's a movie for TV like "Razor" was. And it's sort of a prequel. It takes place right before Battlestar Galatica the series started. It takes us right back to right before that time period. It's not really far in the past at all...and it's called "The Plan" so there's a lot of information that's revealed.

How was it wearing the Number Six (Tricia Helfer) wig? (Ellen comes back in one of Saul's fantasy sequences dressed and acting like Number Six.)

(laughs) It was fun. It was fun being a platinum, I tell you. It was really interesting wearing the black cat suit and the whole Number Six get up. And to assume Tricia Helfer's physicality and to neutralize me and take on her essence. To become as much like her as possible. That was really fun to do.

What do you think it is about Battlestar Galactica that's made it such a cultural phenomenon?

I think it has to do with the fact that they've taken very current stories that are affecting our lives deeply, political stories that are insidiously changing our lives. The way the whole Bush regime has created this intense fear and this ominous threat has changed our psyches as Americans. The writers used the current political canvas and laid this fantasy story on top. Here we are, a couple of generations removed in Battlestar. It doesn't take place so much in the future that if feels like it couldn't happen to me. I think Battlestar is so powerful because you could really feel this happening to us as human beings. And how they use politics and the current topics, suicide bombings, cloning, the political take over...it's relateable. It's current politics, just one step removed. I think emotionally we're very caught up in how we're being affected by our political regime. And it's right there in Battlestar. But because it's a TV show and it's in the future, it's easier to hear and to respond to.

I think it's also the human element of survival. And, oh my gosh, it's only these few people and they're rewriting how to do it. How do we rewrite the rules of survival? What's the best way to survive? How do we do this? What is right? What is wrong? It's like anarchy in space. Human life is fragile. All they've got is each other. They have to work it out. They live and love and frak and there's not a lot of hope but it's all they've got.

You just used the word "frak", which is one of my favorites. ("Frak" is Battlestar Galactica's version of an expletive I'm sure you can figure out.) Do you use it in everyday life?

Yes. It's pretty much a part of my language now. (laughs) Frak!