The first time I heard an Indigo Girls song, or remember hearing one anyway, I was about 11 years old. I had just survived what felt like an overly traumatic dissolution of a crush on a boy named Joey, and for whatever reason, the song Ghost made everything feel a little bit better -- that, maybe, we all feel this way sometimes. When I learned that the lyrics were probably written for a woman, by another woman, I also remember it being the first time understanding that in love, life, or anything else for that matter, we were all the same. Felt the same.

Emily Saliers and Amy Ray, who comprise the Indigo Girls, have been fighting this battle towards a sort of universal understanding over the span of their 10-something-year career. As open lesbians, gay rights have been one of their major platforms -- along with a slew of other issues that have plummeted them into the roster of artists who feel that politicking (or activism, anyway) goes part and parcel with the power of song.

When I chat with Saliers, she is at home in Georgia, gearing up for a tour that will take her and Ray across the country in support of their just-released album, Poseidon and the Bitter Bug. We spoke about the highs of this past year (Obama), the lows (Prop 8) and the yet to come. 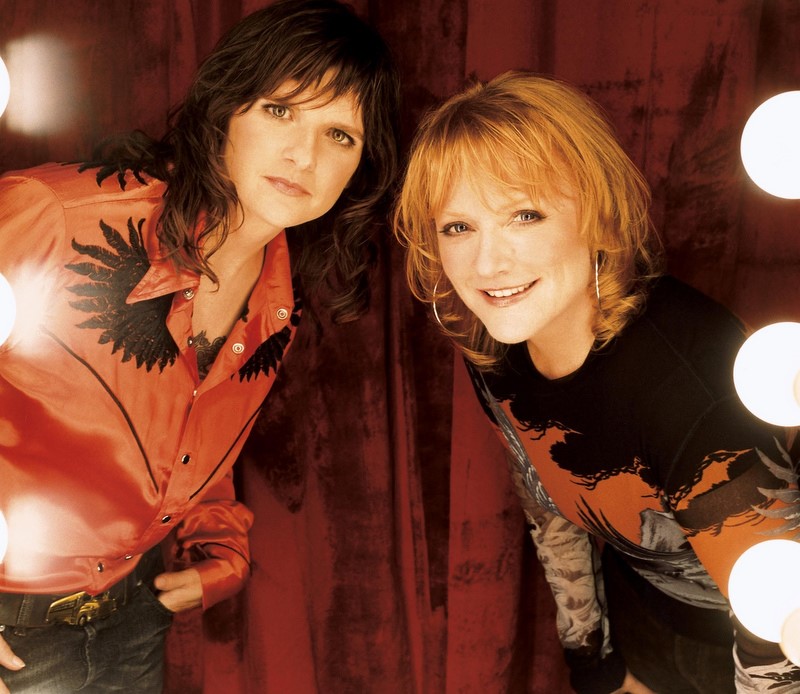 During this election, I knew and interviewed a lot of musicians who were finally becoming involved politically, especially a lot of younger people. Or at least having others finally feel the weight and impact of their activism. You've been doing this for years. How does it feel to see so many young artists finally become invested in a political movement?

I think anytime any young artists get involved in politics it's a very good sign -- it's a sign that they are inspired, and I think that so many young people got involved with the Obama campaign because they had hope after having despair for so long. Whenever anybody gets involved in politics its always exciting for me because we take for granted our freedoms and our abilities to affect change through political activism. People are believing, and that's always a good thing.

How important do you think it is for celebrities or artists to harness their political power? Maybe even more than important -- sometimes almost close to mandatory, like in this election? I don't underestimate the value of what musicians and entertainers contributed to Obama's campaign.

I don't think it should be mandatory, because if you are going to be politically active it has to come from a pure place. But it's hard for me to understand why people wouldn't want to be involved just as citizens. Artists and celebrities are citizens, and as such you have a responsibility to keep fighting for justice because there are monolithic power structures and systemic oppression out there. I wouldn't judge someone who wasn't involved though, since I think it needs to come from a certain type of motivation.

The funny thing is that you might not pass judgment for a lack of participation -- but many pass judgment on the fact that some people don't just shut up and sing. (This year Carrie Underwood famously said, "I lose all respect for celebrities when they back a candidate. I would never want anybody to vote for anything or anybody just because I told them to. Music is where you go to get away from all the BS. Whether it's from politics or just the world around you, music should be an escape.")

Well, I totally disagree with that. I think that comes from a strange place, maybe some guilt for not being active yourself or some sort of psychological dysfunction. It's just because artists are in the public eye and have an advantage, but there are all different people doing different kinds of jobs, who are active. To say it shouldn't be an artist's platform is ridiculous, because they are citizens first. It must have been a bittersweet election season -- on one hand, a great victory with Obama. On the other, a pretty devastating blow to gay marriage in California.

Well yes. First and foremost I was so thankful about Obama. I watched the inaugural in Cambodia, on the other side of the world and crying tears of joy. But Prop 8 was a huge disappointment, a huge setback. I still can't believe how far behind we are in the evolution of human rights in terms of gay people. So the answer is yes, it was bittersweet. But first it was happiness.

Do you think it is an easier world to be in as an openly gay celebrity than it was when you first started performing? How was it changed?

I think it is easier. Hollywood is fairly progressive, generally speaking. And it always helps to have major artists come out like Elton john or Ellen or whoever, I think that helps the evolution. There are some people who don't even know any gay people, and then they realize an entertainer they know is out and then they say, hey, maybe I do really know a gay person. But then again, we've come a long way obviously in terms of legislation, but in terms of protecting our rights we have a very long way to go.

What would you tell fans to do to help further that cause or influence change?

You have to discuss it with people who disagree and agree. And you have to vote! Remain involved in the political process. Have a presence and take a stand.

What about someone like Katy Perry making lesbianism or a female kiss basically a pop culture reference? Do you think it helps or hurts the perception of gay people?

It's definitely not a political statement, but it's not helping the evolution of gay rights in any way. It's more of a novelty song...doesn't make anything better or anything worse. It doesn't mean anything.

The thing that I was thinking about a lot is that it brought a conversation to the table, but on the other hand it seems sad to see a relationship between two women be boiled down to something that's meant to sell songs. You know, and appear in the hot tub on the Real World. Ha, exactly. A girl in her video writes a song about kissing her girl and then goes back to her boyfriend. What's the point?

They don't even show her kissing a girl. I mean, come on, right?

I was looking back at your old lyrics from your last album, and one that stuck out was from "Pendulum Swinger" where you say "Pushed under by the main press, buried under a code of dress, relegated by the Vatican, But you can't keep a spirit down that wants to get up again."

That song was a lot about the patriarchy in the church...and just a general sexism across the board. It speaks really to the history of sexism -- you saw it with Hillary's campaign. She either wasn't womanly enough or too much of a woman. Sexism still rules all. We don't like to admit that. So that song was just talking about the way the media has portrayed women, not allowing them to be involved in religious life. Spirituality plays a big role in your life -- you grew up as the daughter of a theology professor and around the church. Did you find music as a result of not feeling accepted as Christian?

Well, for one, I don't really know what I am. I was never forced to go to church, and there is a lot of beauty in Christianity that I take in my life as a gift, and there is a lot of beauty in other religions. I'm kind of a spiritual mutt. I was in a church choir early on and that really helped me musically in terms of chops, learning how to sing harmonies. And I mean -- connecting with music. A black church choir -- nothing takes you closer to the source. But in terms of songwriting, it's a cathartic way to be able to explore issues of faith or ways organized religion can oppress people. These are things that come up in our songs, both Amy's and mine. So music was a tool for exploration. It has been a great friend to have music, for songwriting. I wouldn't be me without it. Were your parents always accepting of you being openly gay?

Yup. They were, always. They probably knew before I told them...They are very progressive thinkers.

Do you ever find that people have a hard time understanding your relationship with god and Christianity as a gay person, whose Church has historically been oppressive? It's a really big struggle. It's a schizophrenic feeling to be involved in church life and then feel that there are so many people that stand against you. Personally, I've never had an issue with my sexuality and my faith. I felt like I was born to be who I am and I never had issues. After a certain point, it's a discussion that won't get you anywhere if you are talking with someone who thinks Christianity should condemn gays. I gravitate towards people who support the notion that we are all created equal, and history will just show that this is just a dark time.

Do you think Obama can help make a difference in the public perception of gays?

Let me say this first -- I think that if he came out and supported gay marriage he wouldn't have been elected. But I believe in him. I think he is a man of integrity, and my guess is that he doesn't have any issues with homosexuality personally at all. As a gay person of course I want a president who will come out and say, it's ok for gay people to get married. Just say those words. But at this point still, its political suicide.

The bulk of our work is typically done through Honor the Earth. Our next campaign is for setting up green jobs -- green jobs for brown people, we call it. Getting green power on the grid. (Since our interview, the Indigo Girls also announced a partnership with "Rock for a Remedy," an organization that partners with local food relief organizations and national touring artists to gather food donations for community food banks.)

Do you run a green tour?

We run our bus on biodiesel and we have all kinds of things on the rider specifying environmentally friendly products and requirements, we recycle everything locally, we do everything we can to make it as green a tour as possible. A little better than just asking for a bowl of green M & M's.

The Indigo Girls kick of their 2009 tour this week in Palm Springs, CA.