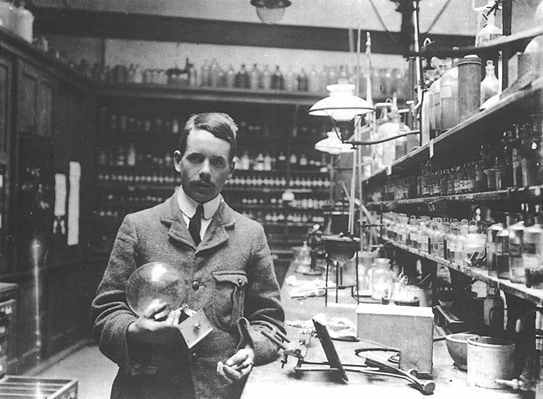 Henry Moseley in the Balliol-Trinity Laboratory, Oxford, circa 1910, Wikipedia Commons

This poem was first published on YouTube, and it was written circa 2004.

An Ode to Henry Moseley

It was in the Great War to end all wars he fell,
Amongst the rocky, godforsaken Dardanelles;

He but young lad when his death time came,
Yet one already of scientific fame.

So before Queen and Country took his soul,
Him had taught us what to know;

And if you think this all a fancy fable,
Simply peer into the periodic table.

Henry Moseley (November 23, 1887 - August 10, 1915) was an English physicist who had a major impact on our understanding of what an atom of an element is made of and how we should arrange these elements in the periodic table, and doing all of this before he was killed in action in the First World War at only 27.

After graduating from Trinity College, Oxford in 1910, he came to Ernest Rutherford's lab in Manchester to teach and research, soon focusing only on research. Dmitri Mendeleev had created the periodic table many years ago and he had arranged the elements by their atomic mass (weight) and their chemical properties. Yet like many scientists Moseley was quite aware of the periodic table of elements and how there were some obvious inconsistencies about how the elements were arranged. He wanted to see if their arrangement could be better understood.

In 1913, Moseley began working with X-ray Spectrometry because he was aware of how some scientists had used this method to learn about the atom of an element. He thought more might be learned. And so he began working with and improving the technique of using a spectrometer to understand the atoms of an element. He eventually discovered that the X-ray spectra from each element could lead to a mathematical number showing how many positive charges it had in its nucleus. In fact, he had discovered that an element's atom was not defined by its atomic mass but by the number of positive charges (protons) it had. In other words, he figured out how an element is defined by its atomic number and not by its atomic weight.

With this knowledge the arrangement of the elements on the periodic table could be correctly ordered and easily explained. He was also able to make some astonishing predictions about certain elements and how many elements there were. And while some scientists had hypothesized that a nucleus had a positive charge to it and that the number of this positive charge might even be the thing that defines it as an element, he experimentally proved it. And so to a large degree where we put an element exactly on the periodic table and to some degree how we see what the defining characteristic of an atom of an element is, he is given credit for. (Almost everything in science is a community effort of many people, both past and present.)

And when England suddenly found itself involved in World War One, he voluntarily enlisted in the British Army, even though family and friends tried to persuade him not to do this. But he thought it his duty. He served as a technical officer in communications in the Royal Engineers. He was part of the Gallipoli campaign. He was killed in action in Gallipoli, Turkey, when a Turkish sniper's bullet struck him in the head on August 10, 1915.

Isaac Asimov wrote of his death: "In view of what he might have accomplished...his death might well have been the most costly single death of the War to mankind generally." Many scientists believe if he had lived he would have won a Nobel Prize in 1916. And because of his death (and also Rutherford's lobbying efforts), the British government enacted a ban on any promising or prominent scientist from ever being allowed into any combative situation.

I came across his story when I was working as a substitute teacher in a chemistry class. I thought what happened to him both uplifting and tragic, and very deserving of a poem. So I wrote this poem; it was the first poem I ever penned. Its beauty is in its simple truth.

And I thought of putting this poem up now with a story behind it because four more elements have just been added to the periodic table and they are still awaiting formal names. And, I think, it would be nice if Henry Moseley got an element named after him. It really would be, and I do believe he is deserving of such a distinction.