One of the last times I went to a drive-in movie theater was in 1982 or 83 for a double feature of E.T. and The Dark Crystal playing at the Foothill Theater in Azusa. As I recall, the asphalt was full of potholes and my folks had to move the car two or three times until we found a speaker that actually worked. Once the movies started, the screen was so dark that we could barely make out what we were seeing. E.T. wasn't a problem, since I had already seen it four times (I was nine years old after all), but had no clue what was going on in The Dark Crystal. Whenever that film comes up as a topic of conversation, which happens more often than you'd expect, I am not sure if I can honestly say that I have seen it.

Despite this memorable, though less than optimal experience, I really miss going to the drive-in. I have fond memories of curling up with a blanket in the backseat of the Ford LTD, where my older brother and I would actually watch The Jungle Book or Rocky II instead of fighting, which was our usual MO. And if the movie wasn't great, we could just sprawl out and crash while our parents still felt like they were kind of having a night out. Just driving past a drive-in would give us a cheap thrill, as we tried to guess what was playing on the gigantic screen while we zoomed by.

The very last time I went to a drive-in was to see Cannon Ball Run II (which seldom comes up in conversation). We were at a place somewhere in Orange County and I remember the screen being bright and visible while the sound came through some sort of hook-up through the car stereo. I was heartily impressed by this newfangled technology and figured the drive-in theater was keeping up with the times and would be a fixture for me to take my own kids to one day.

Of course I was a naïve youth at the time, and wholly wrong about the future of the drive-in movie theater. To look at a collection of Pacific Drive-In aerial photos taken by the Kelly-Holiday Company, which now resides at the Los Angeles Public Library, it's impressive to see the valuable real estate these cinematic playgrounds took up. The acres of space seemed ready to be eaten up by the surrounding tract homes or retail spaces. With the ever-growing landscape of Southern California, I guess their days were always numbered. Sure, there are a couple of holdouts like the Vineland in Industry and the Mission Tiki in Montclair, but they're far enough from where I live that going to them seems more like an event than a spontaneous night at the movies.

These days, with the talking/calling/texting that takes place in multiplexes, the drive-in seems like a pretty great idea. But that could just be me as a cranky adult pining for the potholes and broken speakers of my childhood.

An Ode to the Drive-in Movie Theater
Pacific Drive In 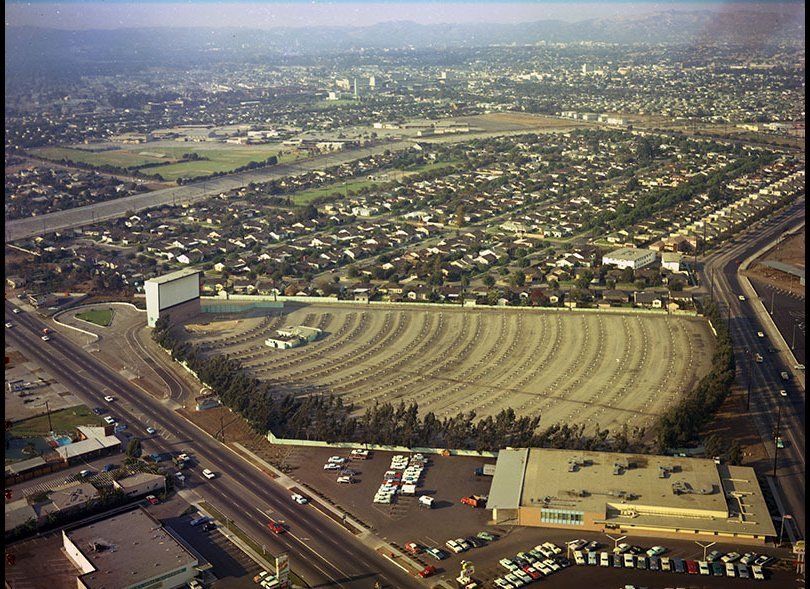