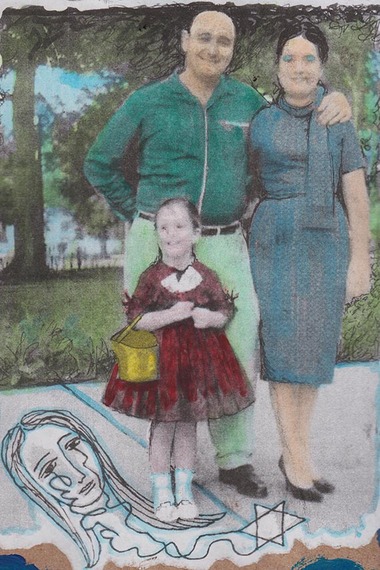 I got the news of Fidel Castro's death before the story broke in the United States. I heard it from my friend, the writer Sandra Cisneros, who texted me from Mexico.

"Will your parents visit Cuba now?" she asked.

She knows they are staunchly anti-Castro and anti-communist.

That night I uttered a prayer: May my parents, who are in their early 80s, live long enough to go back and see the island they haven't stopped dreaming about since we left fifty-five years ago.

Like all children of Cuban exiles who came to the United States in the early 1960s, I heard the name "Fidel Castro" constantly. He was the sole person responsible for the sorrow of my parents and grandparents, aunts, uncles, and cousins who lost their beloved home in Cuba. As Cuban Jews, the wound came atop another wound. My grandparents, Jews from Poland and Turkey, were double refugees--they fled Europe on the eve of the Holocaust, finding refuge in a tropical island of rumba and sugarcane where everyone called each other "mi corazón" and anti-Semitism didn't exist.

The family expected to stay in Cuba forever. They shared the patriotic fervor that led to the Cuban Revolution. But when Fidel Castro took away their livelihoods, they fled with other Jews in a mass exodus. Forced to confront the impermanence of life, they exclaimed, "Nada es para siempre" (nothing is forever), and choking back tears, they asked, "Who knows if we won't have to pack a suitcase and leave again?" I'll never forget how vehemently I was told, "No, you cannot take piano lessons! Learn to play something portable, like the violin."

I was five and a half when we moved into a one-bedroom rental in Queens, New York. My father worked three jobs to save up to buy a Castro convertible sofabed, a modern contraption that the whole family thought was extremely sophisticated. My parents slept in the Castro in the living room so that my younger brother and I could have the bedroom. But as a little girl I was not only worried but very confused. How could Mami and Papi sleep on a sofabed called Castro? Wasn't that the name of the man who took our country from us?

Going on shopping trips with my mother to Alexander's, a bargain basement store on Queens Boulevard, we spent hours hunting for the prettiest clothes on the sales rack. But the next day Mami would be wracked with guilt. Fidel Castro had called those of us who left Cuba the "worms" of the revolution, but Mami in her own way believed in the egalitarian ideals he had espoused. "We don't need so many clothes," she'd say. "Let's not be greedy." Since I spoke better English, I had to help her return everything to the store, hanging my head in shame as the saleswoman sniffed the clothes to be sure they hadn't been worn.

When I began returning to Cuba in the early 1990s, I was eager to see with my own eyes the place my family yearned for so desperately and that I left too young to remember. As an anthropologist, I travelled there to do research on the tiny Jewish community that remains, a mix of communists and converts who miraculously keep alive the Jewish heritage without a rabbi. But it wasn't just the research that made me keep wanting to return to Cuba over and over. I felt a longing to reclaim every memory ever stolen from me, to find the little girl who had once played under the banyan trees and ran unafraid on the high ledge of the Malecón feeling the sea mist. I wanted my childhood back.

And in a way I got it. People on the island would correct me when I told them I had left Cuba. "No, you didn't leave Cuba, you were taken out of Cuba," they said. I realized I'd always be a little girl in Cuba. Never grow up. But now I'm an old little girl, "una niña vieja."

I don't know how I managed to go to Cuba as often as I did, terrified as I always was of being in Cuba on the day Fidel Castro died. He was such a frightening figure from my childhood I was certain a cataclysmic rupture would happen on the day he ceased to exist. In my fantasies, I saw the earth breaking open and swallowing me whole and taking me with Him. As fate would have it, I wasn't in Cuba when he died. I have witnessed from afar the clanging of pots in Miami, the tears shed in Cuba.

One of my wishes throughout the years, never spoken aloud for fear of jinxing it, was that Caridad, the beautiful Black woman who was my childhood nanny, would outlive Fidel Castro. When I first returned to Cuba, I was prepared for her to turn her back on me in a gesture of defiant revolutionary pride. Why would she care about a white middle class girl she once babysat for? Instead, Caridad took me in like an orphan. She had hoped to be a schoolteacher and didn't fulfill her dream under Batista or Castro, but she read voraciously. She remembered my mother fondly and one day gave me a gift to take back to her. They were my mother's honeymoon nightgowns, made from the lace my grandparents sold in their store on Calle Aguacate, left behind because they didn't fit in her suitcase. Somehow Caridad had the presence of mind to save the nightgowns for my mother in the turbulence of the revolution, an act of kindness that brought tears to my mother's eyes. At the age of 91, Caridad is now very frail, but she has outlived Fidel Castro. I take that as a sign that it is her spirit of kindness that will prevail in Cuba.

We had come to think Fidel Castro was eternal. He was so omnipresent he found his way into the psyche of all Cubans, including children like me for whom he was a bogeyman. On the island, many believed he secretly practiced Santería, the religion of Yoruba origin brought to Cuba by the African slaves. On one of his trips to Africa, people said, he received the sacred stones, the fundamentos. This African mojo protected him. "No puedan con él," people told me. No one could do battle with him. He was invincible.

But in the end he wasn't invincible. Time caught up with him. As his ashes are ceremoniously wheeled across the island, it is the shock of his mortality that is on view.

Fidel Castro will return to the earth on December 4th, the day Changó, a warrior deity who rules with lightening and thunder, is venerated in the Santería religion. It is a fitting end. Fidel Castro tore a nation asunder. Even now, as Cubans mark his passing, we can't agree whether to weep for a revolutionary hero or cheer for the demise of a tyrant.

But maybe we can declare a truce and try to see things from each other's side, so that we can all heal. I felt that note of hope in a text message my mother sent me, where she surprisingly expressed sympathy for the mourners in Cuba she had watched on television: "Hi Ruti, it was unbelievable to see the lines of people waiting for hours and hours in that infernal heat, and some who couldn't bear it even fainted, all just to offer their last goodbye."

As an old little girl who has just turned sixty, I dream of the day when my parents will go with me to Cuba. In my Cuban dream, I am taking my parents by the hand and leading them through the broken streets of Havana that I have come to know so well. The streets are flooded, as they often are, by ocean waters that turn to rivers, cleansing away the years of sorrow, longing, and grief, giving us hope for the return of the home in the heart that never went away.