"And upon this rock I will build my church, and the gates of hell shall not prevail against it." Matthew: 16:13-18.

Declaring his intent to chart a path toward "clean coal," President Obama announced the establishment of an Interagency Task Force on Carbon Capture and Storage this week, along with his goal of bringing 5 to 10 commercial coal-fired demonstration projects online by 2016.

All politics aside, I pray for the day our President declares his intent to chart a path toward a coal free future.

In the meantime, I couldn't help but think back to a similarly cold winter day in 1992, when the National Coal Council held a conference to come to grips with a disturbing marketing reality: "Coal has a dismal image." Coal was "maligned and misunderstood." Worse yet, according to the Coal Council, "Most Americans do not think about coal at all."

The convention of coal companies grappled with these popular images: Air pollution and visibility, mine safety and labor regulations, unregulated strip mining, local apprehension, global warming, acid rain, soot and particulates, acid mine drainage and abandoned mines and more subsidence, the dreaded images of coal-draped Eastern Europe, and an unfair media. Coal was destined to play the villain unless "effective actions are taken to alter the public's perception of coal."

The coal executives said a little prayer for "clean coal."

It had been a handy little slogan for over a century, dating back to the 1890s when coal companies peddled smoke-free "clean coal" to burn in your stove or furnace. It had been trotted out every decade or ago, whenever the coal industry found their image in the mire of workplace disasters and environmental nightmares.

And the devastation in the coalfields, and the health of coalfield residents and coal-fired plant communities, will continue as the nightmare curse and consequence of this prayer.

Whether the chimera of carbon capture and storage technologies for coal-fired plants ever come true in the next generation, one fact remains: More coal, and even dirtier and more costly coal, will be mined than ever.

Noting that "present estimates of coal reserves are based upon methods that have not been reviewed or revised since 1974," Richard Heinberg pointed out in his article, Is "Clean Coal" a Dead End?:

"America's coal resources are indeed vast--none of the studies claims otherwise. However, during the past century, coal reserves (the portion of total coal resources that can be mined profitably with existing technologies) shrank much faster than could be accounted for by the depletion of those resources through mining. That is because geologists are doing a better job now of taking into account "restrictions" that make most coal impractical to mine--factors having to do with location, depth, seam thickness, and coal quality. In recent years, some nations have reduced their booked coal reserves by 90 percent or more on the basis of new, more realistic surveys.

Yet there is a subtler but possibly even more decisive price tag for "clean coal": the energy cost. According to the most recent estimate (from Harvard University's Belfer Center (5), at least 30 percent of the energy produced by burning coal will be needed to run the system for capturing, compressing, pumping, and burying CO2. Therefore any efficiency benefit from gasifying coal at IGCC power plants would be canceled out.

But already the average quality of coal being mined is declining--that is, we get less energy for each ton of coal burned today than we did ten years ago. This is a natural consequence of the "low-hanging-fruit" principle of resource extraction, in which we tend to consume the highest-quality, most easily accessed resources first.

So as time goes on, the US will need to burn more coal, while the coal itself will be more scarce and costly. "

And this means that even more dirty coal will be stripmined by reckless mountaintop removal operations in Appalachia, and stripmining operations across the country.

Down in my native Eagle Creek community in southern Illinois, I once stood by the clearing where my family's historic Bethel Church, an anti-slavery church that had led in the movement to stop legal slavery in the nearby coal mines, had once been blessed on the land donated by our family. "Upon this rock I will build my church," went the scripture; and upon this rock explosives fractured it into pieces.

Our church, along with the entire Eagle Creek valley, was stripmined into oblivion.

With the agreement of the dwindling congregation, the church had been demolished and a new building built across the road from our family cemetery. Whether the coal company's blasting had been the tipping point of despair, or the congregation had dissipated to a righteous remnant that could no longer support a weekly meeting, the new church doors rarely opened now.

In his powerful dispatches from the coalfields in West Virginia, blogger Denny Tyler has chronicled the devastating impact of mountaintop removal operations in depopulating historic communities. In the town of Lindytown, West Virginia, Tyler captured the haunting image of a boarded up church, sitting at the basin of a mountain that been been clearcut and prepped for mountaintop removal.

The coal company's "clean coal" prayer came true for Lindytown: Thanks to regulatory mining policies, now they can even strip mine Jesus. 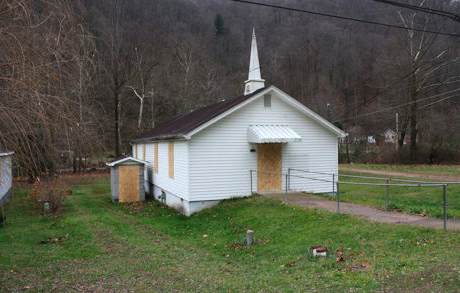