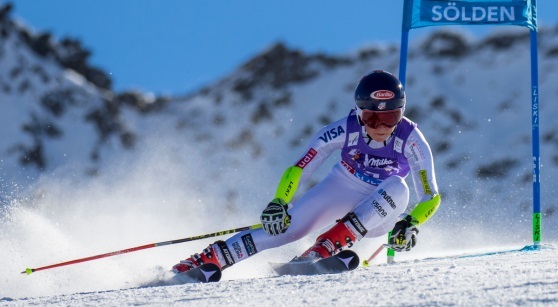 In my last article, I explored the first of three holiday gifts that the Olympic and World Champion, Mikaela Shiffrin, gave to young athletes for the holidays, namely, the power of disappointment to fuel your athletic efforts. This article will introduce you to holiday gift #2 from Mikaela, the importance in a competition to fight to the end no matter what.

In a World Cup giant slalom in Aspen a few weeks ago, Mikaela fell three gates from the finish with the victory within her grasp. To her credit, after the race, she said, "I felt kind of scrappy that run. I definitely didn't feel great, but I was fighting really hard and I'm proud of that." Also, to her credit, Mikaela learned a powerful lesson herself the hard way, near the end of a competition "I was like 'Oh my God, I can't believe I made it this far!' You should never, ever think that because immediately something bad will happen." The lesson: Don't change your focus until your competition is over.

It's normal to get nervous before a competition, particularly a big one. You're putting all of your efforts on the line and you want to succeed really badly. The problem is that those nerves can hurt your chances of performing your best and achieving success.

Those nerves have been wired into you since early life on Earth climbed out of the primordial muck and evolved into animals and then into human beings. The reaction that you feel before a competition--those nerves--is the same 'fight or flight' response that your ancestors experienced when confronted with a threat to their survival. Your heart pumps faster, your breathing quickens, and adrenaline flows, all of these changes preparing you to fight or flee to increase your chances of survival.

The reality is that, in sports in the 21st century, your life is not often mortally threatened (though there is certainly a risk of injury and, in rare cases, death). But a competition causes a difficult kind of threat to survival, namely, survival of your self-identify, self-esteem, and goals as an athlete. But the primitive part of your brain doesn't know the difference; it only knows "I'm threatened. I have to save myself" and that's when your fight-or-flight reaction kicks in.

One big problem with our fight-or-flight response is that what worked for our survival when we were cavepeople on the Serengeti 250,000 years ago doesn't work in sports in 2015. Go back in time and imagine that you are hunting and gathering on the savanna of Africa and a cave boy or cave girl from a rival tribe approaches you with a really big club in their hand. Your life is threatened, your survival instinct is triggered, and your fight-or-flight reaction goes off. Now here's a question for you: Will fighting or fleeing increase your chances of survival? I would suggest that fleeing will because as long as you keep your distance from the club, you have no chance of being pummeled to death (of course, that rival cave boy or cave girl might be a faster runner than you are, but let's not go there). So, we are hard wired to flee when our life is threatened.

Now transport yourself back to the day of a competition in 2015. Survival has a different meaning. It's no longer about physical survival, but rather about performing your best, getting results, and progressing toward your sports goals. So, when you go to compete, your athletic life is threatened and your innate reaction is to flee. I don't mean you would literally run away from the field, court, course, rink, or other setting in which you are competing. Rather, fleeing in sports means performing cautiously and safely. The problem is that your chances of being successful when you play it safe are very low which means the equivalent of death in your athletic life.

Said Mikaela after her victory the next day in the World Cup slalom in Aspen, "I was really nervous the first run because it was the first slalom of the season... I was just thinking, 'Use that, keep the fight, just keep fighting..." Interestingly, in recent years, Mikaela has talked about her nerves before races and usually was relatively slow the first part of her race runs. Though she would usually overcome the nerves and kick butt the rest of the run, it seemed as if Mikaela was 'fleeing' early in her race runs and it resulted in her being slower than she could have been. That reaction has certainly changed for her as it appears that she is fighting right from the start.

When your fight-or-flight reaction is triggered before a competition, you want to fight from start to finish. Your challenge is that you are resisting millions of years of hard wiring screaming at you to flee. But resist you must if you want to survive as an athlete and achieve your sports goals.

The next time you get nervous before a competition, recognize that your inner cave boy or cave girl will be telling you to run away as fast as possible. But the 2015 you must say, "I am fighting, not fleeing!", then turn those nerves into anger and fight, just as Mikaela did in the Aspen slalom; "I still had that pent up anger from yesterday..." She used it to charge her way to a World Cup win with a record-setting margin of victory. And you use your fight to perform your best too.

Here are a few practical things you can do to turn nerves into fight:

When you choose to fight, you have to accept that sometimes when you fight, you might still get beat, just as if you decided to fight the cave boy or cave girl with the big club, they might still pound you into hamburger meat. Sometimes, fighting doesn't work out such as what happened to Mikaela in the giant slalom in Aspen. Other times, fighting does work, like for Mikaela in the slalom the next day in Aspen.

Here are two simple realities that should make fighting an absolute 'must do' for you in your athletic life. If you choose to fight, you don't have a 100% chance of success on the day of a competition because there are so many variables that you can't control that might go against you. But, on any given day of competition, if you choose to fight, you have, say, an 85% of success. Moreover, if you keep fighting in every competition, I believe that you have a 100% of good things happening at some point.

In contrast, if you don't fight, but instead let your inner cave boy or cave girl control you and you perform to survive (in the primitive sense) by playing it safe, you have zero chance of success.

Sounds to me like fighting is your best shot at athletic survival.