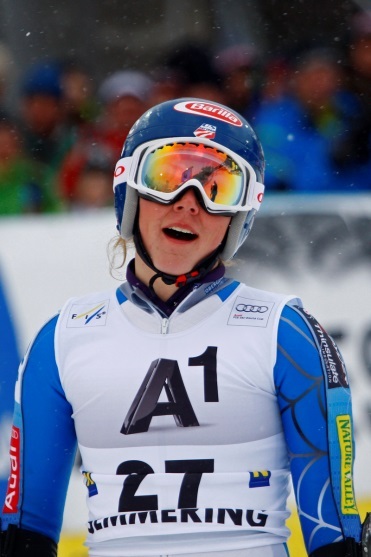 My first two articles in this three-part series on the gifts that the Olympic and World skiing champion, Mikaela Shiffrin, has given to athletes for the holidays focused on how to react to disappointment and the importance of fight to perform your best. In this last article in my series, I want to share with you the final gift that Mikaela has given athletes for this holiday season: risk.

I have been a keen observer of Mikaela since I first saw her train at Burke Mountain Academy (a private boarding school in Vermont of which I'm also an alum) when she was 13. There were two things that always struck me about her skiing. First, she was always rock solid; always stable, well balanced, and rarely out of control. Second, she was remarkably consistent; I don't remember ever seeing her DNF on a training course. And here's a freakish statistic: Mikaela has not finished a race THREE TIMES out of 50 starts since the start of the 2013-14 race season.

Oddly though, as fast as Mikaela has been and as many races and titles as she has won, I have always felt that she was skiing well within herself and actually leaving time on the course, in other words, even at her incredible level of skiing, she was really just skiing good, but not as fast as she could because she wasn't taking the risks necessary to truly push the limits of which she is capable.

That good skiing seemed to end in Aspen, Colorado back in November as I saw a very different Mikaela in both the giant slalom and the two slaloms. In those races, it was clear to me that she was pushing hard right out of the start, making small mistakes (because she was seeking more speed), and was off balance frequently. In other words, Mikaela was stretching the limits of how fast she could go by taking risks. Though one could argue that her fall three gates from the finish of a near-certain victory in the giant slalom in Aspen was just a fluke or a tactical error, I see it as her taking a risk by straightening out her line in search of more speed. As for her two slalom victories there, yes, she has won many World Cup slaloms before, but never by such large margins, which means that she's reached a new threshold of speed.

I see these three races as further evidence that her skiing -- and her mentality -- continue to evolve as she seeks to define the limits of how fast she can ski. Yes, she can get physically stronger, tweak her equipment, and fine tune her technique and tactics. But the final piece of this puzzle is the willingness to take risks. She seemed to support this development by saying, "...you don't deserve to win races if you're not taking some risk. So that's what I did today, and it did pay off."

To be sure, risk taking is essential for success in all sports. You just can't play it safe or comfortable and expect to play your best. There are too many other athletes pushing their limits in every sport and it's the very small advantages that come from risk that make the difference between goals achieved and hopes dashed.

But taking appropriate risks in sports isn't easy to do because taking risks is, well, risky. So, let's explore risk and see how you can make it a part of your sports performance (and your life) to help you reach your athletic (and your life) goals.

The dictionary defines risk as a situation in which you expose yourself to danger. Though physical risk is an inevitable part of sports, the risk I'm talking about involves more psychological and emotional risk. Clearly, risk is essential for success not only in sports, but also in every aspect of life, whether starting a tech company or telling someone 'I love you.' If you don't take risks, you won't improve, progress, or grow. And you will never find out what you are truly capable of or how far you can go.

This kind of risk comes when you walk onto the field, court, course, or other sports venue to compete and face a test of your ability, efforts, and preparation. You are putting your self-identity, self-esteem, and goals on the line. After the competition you will learn whether you succeed or fail at the test. The risk then becomes clear: failure!

Given the risks of taking risks, there are obvious upsides to not taking risks. You stay safe. You never get uncomfortable. And you avoid total failure which I define as giving it your all and not achieving your goals (as long as you play it safe and don't take risks, you will always have an excuse to protect yourself).

Of course, there are far more significant downsides to not taking risks. You will be perpetually stuck where you are. You will never be truly successful. You will feel really frustrated. And you will never be completely satisfied with your efforts.

To Risk or Not to Risk, That is the Question

Hopefully, I have convinced you of the necessity of risk in sports. But taking risks in sports is a simple, but not easy, choice. It's a simple choice because would you rather take risks and succeed or play it safe and lose? The answer is obvious. At the same time, it's not an easy choice because no one likes to lose and, when you take risks, losing is a distinct possibility (that's the nature of risks). Also, there are a variety of powerful psychological and emotional forces that hold you back from taking risks:

I'm not saying that you should take risks indiscriminately all the time; that's a recipe for disaster. Your goal should be to increase your willingness to take appropriate risks when you practice and compete.

STOP! I'm only about half way finished with what I want to say about risk and this article is already too long. So, you'll have to wait until the new year to learn more about risk taking in sports.