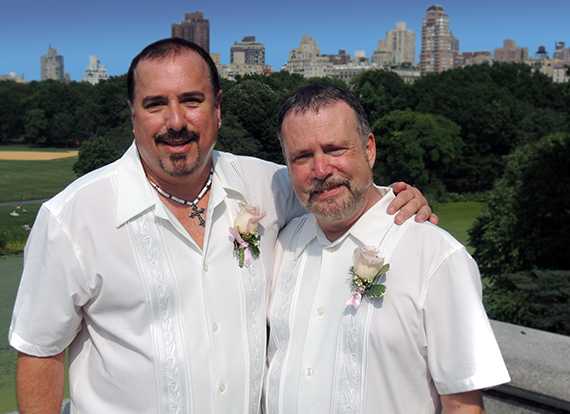 In 1995 I was fired from my position as Minister of Music and Assistant to the Pastor at a Cumberland Presbyterian Church. The reason for my dismissal? Being gay and in a loving committed relationship with my spouse, Gary Eddy.

The pastor of the church knew about our relationship and had even attended our wedding. He promised to stand with me when I decided to come out to the elders of the church. Yet when push came to shove, he became distant and did not fight for me.

A member of the national headquarters for the Cumberland Presbyterian Church begged me to resign and not put the church through the agony of firing me. He confessed that he did not think my loving committed relationship was a sin but that a trial before the elders would most likely cause irreparable damage to the church.

"Randy it is not the time for this battle to be fought."

"So when will it be time?" I asked. "You sir may not get the calls I do from precious young people who are gay and have become suicidal because the church, the last place they felt they could run to for safety, turned them away. Perhaps you have not dealt with the pain of knowing about the ones who didn't call and did succeed with ending their lives. When will it be time for the church to deal with this?"

My pleas did nothing to change his mind. He attended the meeting where the elders were gathered to vote on keeping me or firing me. He addressed the elders

"I want to say that I know there is a lot of love for Randy in this church. I know his ministry has been appreciated by many of the members. I have experienced his sincere ministry. I feel convicted for asking you to do this, but I must ask you to terminate Randy's position as minister of music and assistant to the pastor."

Wow! I was amazed that this man could sit there and and say that he felt what he was asking them to do was wrong. He used the word, "convicted" which means proven guilty. So he seemed to be saying in effect, "I feel guilty and judged in asking you to do this, but because of my position, I must do the wrong thing."

It reminded me of something Martin Luther King Jr. wrote in his Letter From a Birmingham Jail:

I must confess that over the past few years I have been gravely disappointed with the white moderate. I have almost reached the regrettable conclusion that the Negro's great stumbling block in his stride toward freedom is not the White Citizen's Councilor or the Ku Klux Klanner, but the white moderate, who is more devoted to "order" than to justice; who prefers a negative peace which is the absence of tension to a positive peace which is the presence of justice;... Shallow understanding from people of good will is more frustrating than absolute misunderstanding from people of ill will. Lukewarm acceptance is much more bewildering than outright rejection.

Today I want to appeal to my fellow moderate progressive pastors. I believe your hearts are in the right place on this issue. Yet for fear of what might happen to you personally, many of you are still hiding behind the mantra "It's just not time for the church to deal with this issue."

I know that many of you are championing social justice issues and are willing to call the church to repentance on how it has treated the poor and women, but to some degree, this is a safe fight. Yet when you are asked about the gay issue, you try and downplay its importance.

Gary and I have pastor friends who accept us as a married couple, eat with us, and call us their friends. But when given the opportunity to champion our cause, they are sadly missing in action. Some plead confusion with scripture when at the same time they privately assure us that we are safe from God's judgment.

"Even if it is a sin," they assuage us, "it is covered under the blanket of God's grace so why make a big deal about it in the church?"

I am sick and tired of having my beautiful loving marriage referred to as something so distasteful that it has to be covered by grace.

I am writing this to ministers of the gospel who have come to a place of acceptance of God's gay/lesbian/transgender children in the secret place of your heart, but are allowing fear to keep you from publicly standing up for them. I believe it is time for a spiritual Stonewall! I believe God is calling you to stand with the outcast.

Desmond Tutu has said, "If you're neutral in situations of injustice you have chosen the side of the oppressor."

You have had time to witness people you know and love, gay/lesbian/bisexual/transgender friends and parishioners, who you have witnessed through their lives and their relationships, the fruit of God's Spirit. You can no longer plead ignorance of God's work in the lives of these precious children of God.

Now is the time! Stand up and make a difference.
Your flock is looking to you for leadership, for an example of how to live out their lives as authentic follower of Jesus Christ.
Lead them! Let them see your heart.

You may lose some of your hard-earned security in this world, but you will be able to sleep better at night, knowing you stood for those Jesus loved.

So here we stand... a gay Christian married couple, madly in love with each other, who when told we were not welcome in the church, formed a church where all of God's children can worship. We have served God and the church together for twenty two years. What will you do with us and those like us?

We need you! Will you stand with us?

Randy Eddy-McCain's memoir; And God Save Judy Garland. A Gay Christian's Journey can be purchased HERE or HERE.