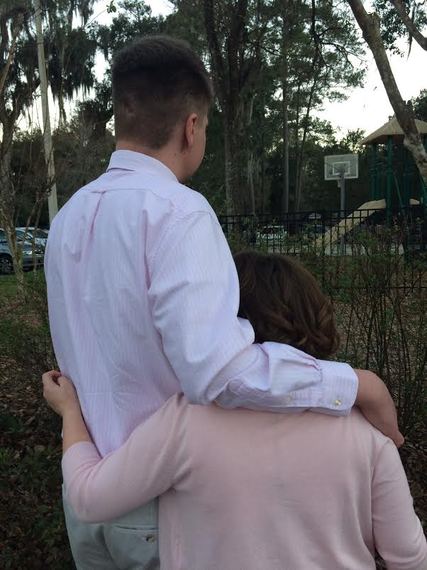 According to an interview with Fox News, when Tim Tebow was 15 years old, he attended a school in the Philippines where he witnessed a young man being shunned from an event because his feet faced backwards. This inspired him to want to help those with special needs

Many well-meaning fifteen year-olds may have had a similar dream. But Tebow realized that dream, created the Tim Tebow foundation which now hosts a Night to Shine where those with special needs are guests of honor, and everyone is treated like the king and queen of prom.

"It is about celebrating them, it is about loving them and letting them know that their lives matter and that they are special, and giving them the time of their life."

Caleb was fortunate to attend last year's event at one of 45 participating churches. Mr. Tebow even came to speak to remind the attendees that they are exactly as God created them, that they are kings and queens.

I watched as he made his way through the church, surrounded by at least eight bodyguards. Tebow's cocoon was tight, until he spotted one of his honored guests. He broke from the huddle, made eye contact, had a real conversation and took as many selfies as the guest needed. He did this for several other guests, but not for one typical person, because they weren't for whom the party was given.

As we were leaving that night, Caleb asked if he could go again next February. In awe of all that had happened, I told him I thought it must have been a one-time thing because who could possibly recreate such a night?

This year's Night to Shine boasted over 200 host churches in 48 states and 8 countries. With over 70,000 volunteers to support over 30,000 guests, these numbers are greater than what Tebow's former University of Florida football stadium The Swamp can handle at full attendance.

This year my friend Clare and I wanted to make Night to Shine even more special. Clare's daughter Ashley and my Caleb have been boyfriend and girlfriend for over 10 years. We wanted to treat Night to Shine as the Oscars/Emmy/Grammy night that it is for our kids who don't usually get to attend anything like it.

Caleb met his precious girlfriend Ashley in August, 2005 when we moved to a new state and he started a new school. When he walked in the door after school that day I said, "Hey, honey, how was school?" With dazed eyes and a permanent grin, he replied, "Ashley."

At Caleb's birthday party soon after, Caleb met Ashley at the door, gently took her hand and led her to his table. Ashley has Angelman Syndrome and communicates mostly through sign language, which Caleb doesn't fully understand, but she and Caleb have quite literally created their own language. Clare and I watch, hushed, as these two stare into each other's eyes, smile, nod and have the most wonderful conversations.

Ashley came to visit when Caleb broke his femur in 2006 and had to miss three months of school. They would sit on the couch or swim in the pool (always get a waterproof cast). Ashley and her family came to our home for Halloween parties, and we spent lots of birthdays at their home. We just love this family.

Two more moves were in our future, but almost every day, Caleb would ask about Ashley. I have pictures of her in his room and in our hallway. When Caleb was so blessed to be awarded a Make A Wish trip in 2014, Ashley and Clare came. That was the last time we had seen them.

This year, we discovered that Grace at Fort Clarke United Methodist Church in Gainesville, Florida was hosting Night to Shine. Ashley's family and I decided we could meet there and give the kids a prom they would never forget. I explained the situation to the church, and their amazing Pastor Rick Thompson and his extraordinary wife Lara signed up to be Caleb and Ashley's buddies for the evening.

Upon arrival, the guests were checked in, given a goody bag, then crowned with gold king's crowns for the young men and beautiful tiaras for the young women. They were given gorgeous white corsages and boutonnières and led down an actual red carpet to a room festooned with blue, silver and white balloons, soft lighting and fun music playing at a volume that would not agitate those with sensory disorders. This incredible church had made up cards for each table to help their nonverbal guests communicate their wants and needs.

Secure in the marvelous care that Rick and Lara were providing our kids; Clare and I were led down a hall and told a caregiver's dinner was being given upstairs. On the way, another person stepped out of a room to inform us that there were 10-minute massages being offered for parents. One quick look at each other and we bee-lined into special massage chairs and escaped for 10 glorious minutes. To my knowledge, last year's event didn't offer caregiver treats like the meal, massages and even a manicure table. This year's event made all of us parents feel like we could take a breath, relax and enjoy a wonderful dinner. This may not sound like much to some, but trust me, to those of us who rarely have a night out, this delicious meal was an indulgence.

While dining, so many delightful volunteers brought us sweet tea refills and desserts. We talked with other special needs parents, which were easy conversations because we all speak the same language. Our most repeated refrain was "Isn't this wonderful?"

In addition to a lively dance floor, there was a karaoke room and a limo which offered rides around the beautiful church campus. Caleb and Ashley partook of two rides, beaming and giggling like any other prom attendees.

Aside from every sparkling detail of this beautiful prom for the most beautiful people, Night to Shine gifted me, as Caleb's mom, with memories that pierce my heart with their sweetness. When I was helping Caleb dress, I was buttoning his dress shirt and I swear I heard a camera click in our empty hotel room. This is what a typical mom might do with her typical son. When I adjusted his tie (pre-formed for us by my daughter Sophie's wonderful boyfriend Al a few weeks before), I thought I heard another click. Moments I thought had passed me by swooped into that simple hotel room and gave me the gift of something I thought I would never have.

When Caleb and Ashley saw each other for the first time in the hotel lobby, they broke out in the widest smiles, which made Clare and I beam like any other moms on prom night.

"You look beautiful," Caleb whispered, taking Ashley's hand in his.

Clare and I talked on the short car drive to Grace at Fort Clarke UMC, while Caleb and Ashley whispered together in the back seat. So many parents take these moments for granted. For Clare, myself and all of the other parents of the over 30,000 attendees, we have only gratitude to offer. For one night, our treasured children were celebrated like royalty. They were able to dance in a room filled with so much joy it was like a cloud, weaving in and out among the dancers.

Tim Tebow states it best in his mission statement on his website http://www.timtebowfoundation.org/:

"To bring Faith, Hope and Love to those needing a brighter day in their darkest hour of need. The Foundation utilizes the public platform that God has blessed Tim Tebow with to inspire and make a difference in people's lives throughout the world."

You, dear sir, have given a very bright day that we special needs parents, who are often overloaded, discouraged and defeated can remember with a smile. Sometimes one smile is all we need to get through whatever we are facing. Thank you.

This blog is lovingly dedicated to Mr. Bob Dauchy, who spent his life bringing others so much joy and has been taken from us way too soon.