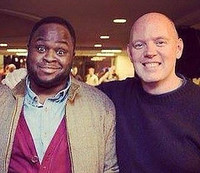 As I watched you bring down the house with your American Idol audition, aired last night, there were so many things I wanted to tell you. While J Lo wiped away her tears on national television, and I did the same with more privacy, I wanted to praise you, thank you, and shout from the rooftops about you.

Thank you, Hollywood Anderson, for showing the world what I can only try to tell them: Young people like you, who have come to Covenant House or are still suffering in bitter weather -- and, sometimes worse, the cold lonesomeness of the streets -- are gifted, brilliant, awesome, and ready to soar, like the rest of us.

You've probably heard me say that the least interesting thing about Covenant House kids is the fact they're homeless. Their talents and hearts are so sky-big. Your music reminds me that any time we walk past a homeless person, we may be walking past a potential Leonardo da Vinci or Dicaprio. The kids you shared meals with at our shelter by New York's Port Authority Bus Terminal are no different, really, from the people you'll be sharing the stage with on American Idol this season.

It makes me want to work harder than ever to make sure we can reach every young person who needs safe shelter, warm food, hot showers, education, job training. It makes me want to give every homeless young person someone like our very own Norm Lotz, who gave you that guitar just one year ago, someone who believes in our kids. There are so many young people like you who lack those basics -- each year 1.6 million American kids experience an episode of homelessness.

I love how you won't say much more about your past than "being home wasn't good for my life and my future," and how you have taken charge of your story, realizing that you wouldn't be who you are today without what you went through. Bless you for looking in the rear view mirror, but not staring.

I am always amazed when the kids we work with show a huge desire to help others. It blew me away when, instead of crowing about your success last night, you said this morning, "This thing here ain't about me being like some superstar, it's about me helping people in a superstar fashion." How many people twice your age would have the grace to say that?

I love how People magazine and The Hollywood Reporter and Yahoo News are recognizing your big talent.

I love how you cracked me up by saying, first off, that the girl you wrote "My Best Friend" about still doesn't know she's in the song, and that "when she does she's going to kick herself to sleep."

I love how you described the feelings you had during the audition - that you finally made it, and that all the crazy stuff that happened to you, the hurt, the disses, made sense. How that moment made you feel whole, and at peace, and how when you cried, it was for the people you've lost who weren't there to see the magic you made.

What a joy it is to know that homeless youth across the world will see you, and realize it's possible that they can achieve their dreams, too. Last year when we crossed the finish line of the New York City Half Marathon, you said something that every kid - and adult - needs to remember. You said, finisher's medal around your neck, "that was the hardest damn thing to do, but not so hard to figure out. You just keep going. Don't quit."

Homeless youth will be watching you closely, a kid who was never allowed to listen to anything but church music, a kid who came to New York "with nothing but a bag and a dream." They will cheer you as you reach for your new goal of putting out an album, but not just any album, a diamond record, 10 million copies. They will be rooting for your generous dream of putting "a dope-ass music program, with music space and art space" in every Covenant House in America.

Anderson, may your dreams come true, every last one of them. May you get to sing for the Obamas. May you get to serenade Ellen, whose show you've loved since you were a little kid. I am so grateful for all the grit and talent and hope you're showing us, teaching us that we may have some of it, too.

Just one of your many fans,