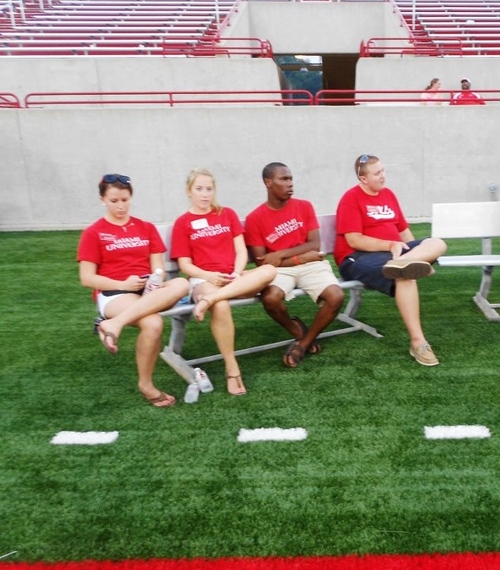 This past week my heart ached due to the mistreatment of our fellow black brothers and sisters at the University of Missouri and the horrific stories of racism and inequality that have plagued their college experiences. After hearing the tragic tales of white supremacy rallies in the heart of Mizzou's campus, screaming white men chasing black girls in pick up trucks, as well as death threats, I was sad for those students, I was sad for their family members, I was sad for my country, but above all, I was sad for you.

I too was a student at a school that believed adding the word "diversity" a couple of times to the university's admissions brochure would divert the attention of potential students away from the fact that less than 3% of the students were black. I too attended a school where an administrator's response to "why don't we attract more students like me?" was "maybe they just don't belong here." I too attended a school where at times I felt unsafe.

Considering it is the middle of November, I am sure that the majority of you, including the Freshman, have begun to see the tough journey ahead. The constant asking of what sport do you play or being told that talking about race & racism means you're oversensitive. You have already been forced to adopt the pseudo-role of the Black Spokesperson for all black people in your all white english class.

Since you have now completed Being Black At A PWI 101, this means that I am able to be frank with all of you. I am hoping that I can give to you the Black Student Handbook that your orientation leader was unable to offer you on that glorious hot summer day.

My first piece of advice is that you must stay strong. Don't feel discouraged to go out even though last weekend the white guy who lost his wallet at that party yelled that someone "n*ggered" it. Don't feel discouraged because at that same party someone had the audacity to ask if you were the weed man. Most importantly, please do not lose it when your communications professor asks you to explain what "chitterlings" are and then moments later asks if he had permission to write the word "aint" on the white board.

My second piece of advice is that after you have remained strong you must now persevere. Keep continuing to participate in your sociology class discussions even though that one kid keeps calling the diversity initiatives on campus a "white genocide" and even though his frat bro came to his defense by asking you why there is no "White Entertainment TV?" Register for that political science course that is taught by that one professor who told you in astonishment, "I didn't think someone like you would make it in my class." Take that route home from the bars even though that same cop continues to ask, "do you go here?" And don't forget to apply for that once in a lifetime school-sponsored internship in LA offered by that department chair who told you he was "uncomfortable" around you during your interview, and when you confronted him he repeatedly called you Jerome Jones even though that is nothing close to your name. Continue to date even though your long-time crush just confessed to you that her dad doesn't allow for her to date black guys.

My third piece of advice is that no matter how hard it may be at times, you must love your white colleagues. Continue to love the white guy in your political science class who yelled that uneducated black people should not be allowed to vote but should instead take a test to get the right to vote as if this was the Jim Crow South. Love each and every one of them even though you are not sure which one of them keeps posting "black people are dirty" on Yik Yak, or which one of them made you feel required to clean up "bye, bye porch monkey" in the stall on the second floor bathroom of the library. Love that drunk girl who made the conscious decision to go in black face to that poorly-themed sorority party. Love the guys who purposefully brought you into the room displaying that large Confederate flag during Greek recruitment. Plus, you can't forget to love the "friend" you went abroad with who, in a drunken rage in Luxembourg, called you a n*gger, making you so ashamed of yourself that even to this day you haven't told your mother.

Do not feel this way because I am here, as well as many others who have come before you. We have walked that same hard path towards academic success and a better life. Yes, you have a long road ahead of you, but never forget you were created to do this work.