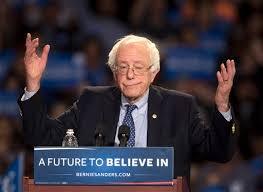 Enough with the "rigged system" claims. Please. The system is not rigged. Or corrupt. Or disenfranchising any of you. Last time I checked, you guys are all over the place 24/7. On TV, at rallies, in the voting booth. You've made Bernie Sanders what he is today: a major contender. But make no mistake: there's simply not enough of you. That's it. No vast left wing conspiracies. No back-room shenanigans. No covert mission by DNC Chair Debbie Wasserman Schultz to keep your guy from winning. Bernie's losing for one reason and one reason alone: he hasn't convinced enough of you to vote for him. And it's because his message hasn't resonated as well as Hillary Clinton's. Period.

Bernie is losing because America's democracy works. It's a process he signed up for (as an independent running as a Democrat), and one which has allowed him to go from being a relatively obscure Vermont socialist (yes, socialist) a year ago -- 60 percent behind in the polls -- to running an unprecedented "outsider" campaign as a very close runner up. Think about that: he's gone from being a political nobody to giving the powerful Clinton machine the most nagging yet effective opposition it's ever experienced. That in mid May Sanders continues to nip at Hillary's heels is not just a testament to his grass roots appeal and tenaciousness, but to the very election process that's got him there.

Sanders' success has become not just a national phenomenon but one that's garnered him worldwide praise and respect. Sounds like "the system" has worked pretty well for him. That he now is turning on that very system for politically expedient, populist purposes speaks to character. This narrative he's reinforcing of a rigged system is irresponsible and disingenuous. He's telling you that he's not winning because of cronyism and corruption, not because he can't gain more traction with voters. He's riling you up with trumped up (pun intended) baseless charges that he and you are being robbed, rather than simply outvoted. The awesome legacy he could have is dangerously close to being destroyed by his ego and selfishness.

How about answering one simple, obvious question: If the system was/is so rigged for Hillary, how come she's having to have this close a fight right down to the wire? To be sure, the campaign has certainly been no cakewalk for her. She's had to fight way longer, way harder and way more expensively than she ever hoped and expected. If the system is rigged, it's the worst rigging in the history of rigging.