"...the assumption that the enforced separation of the two races stamps the colored race with a badge of inferiority. If this be so, it is...solely because the colored race chooses to put that construction upon it." - Plessy v. Ferguson

"Our nation was born in genocide when it embraced the doctrine that the original American, the Indian, was an inferior race. Even before there were large numbers of Negroes on our shore, the scar of racial hatred had already disfigured colonial society." - Martin Luther King, Jr. 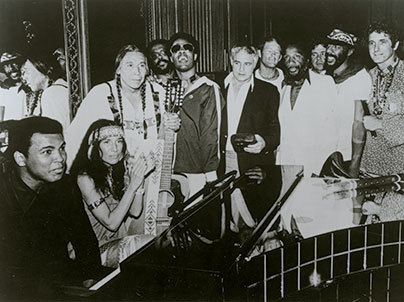 Thank you for the opportunity to talk to you for a bit. I take this opportunity seriously. As a student and lover of black pop culture (just like 99 percent of America), and a recipient of nearly a quarter of African-American blood (I know that's not a bunch, but I proudly claim and love what I have), I love the opportunity to communicate with my black family. I want to talk social justice a bit. Please hear me out:

There's nothing new under the sun.

Historically, "divide and conquer" has been an incredible strategic tactic to keep oppressed groups from helping each other -- make people think that their struggle is unique to them, that the answer is to only focus on their own individual battles. The truth is that most of those battles are related -- Michael Brown is closely related to John T. Williams who is closely related to James Boyd -- and blending forces, intelligence and resources in these battles will only help our own struggles.

That's why Martin Luther King, Jr. spoke about the racism against Native Americans -- he understood the need to emphasize the interrelatedness of the racism that black folks and Natives experience. The DNA of that racism is the same and even though the appearance might be slightly different... it is eerily similar.

And with that, black folks' genetic memory should recognize the racism that Native people are experiencing right now with the Redskins; it is the same racism that black folks experienced during segregation times.

Please allow me to make the connection for you.

And this difference -- racism against Natives doesn't look like racism against others' -- means that Natives are left with the additional burden of justifying the racism we face to other people of color.

So, for example, when young black men today get brutally shot by white cops, the existence of a team called the "Redskins" seems relatively less pressing. Absolutely! But, as we learn from the infamous case Plessy v. Ferguson and segregation generally, psychic injuries can be just as painful and even longer lasting than physical ones.

In other words, someone doesn't have to die to prove something bad happened.

Nobody's life was threatened in Plessy v. Ferguson or by segregation generally. Instead, there was a black man who simply couldn't ride in the white section of a train. No violence, just insult. Heck, it wasn't even universally considered an insult by black folks -- as many black scholars, including bell hooks and Derrick Bell have pointed out, there were many black folks who were pro-segregation. "Only a fool allows the enemy to educate his children." In fact, Bell argued, in Serving Two Masters: Integration Ideals and Client Interests in School Desegregation Litigation, that the lawyers who led desegregation cases never sought local black folks' opinions before embarking on lawsuits to desegregate schools and that, as a matter of fact, many black families did not want the schools integrated. bell hooks further explained WHY those black families didn't want to integrate:

"Segregation enabled black folks to maintain oppositional worldviews and standpoints to counter the effects of racism and to nurture resistance."

Black people were not "unified" on whether integration was a good thing -- opinions varied widely. But even with no complete agreement, who cares?. Segregation was an anachronism, it was bad; in modern times, treating somebody differently because of their race simply shouldn't happen.

In that way (and several others), segregation of black folks is almost identical to the word Redskins (and Native mascots generally) for Native people.

See, for many Natives, "Redskins" is an awful word because it recollects a time when white "Indian Hunters" were allowed to kill Natives with impunity. Now, "Redskins" is celebrated every single week on national TV. Just like segregation, the word "Redskins" reminds Native people that they are treated differently because of their race -- no other race is the subject of being a mascot with no Native people making the decision to do so (whereas the Fighting Irish are well-represented at Notre Dame and within the Catholic Church).

We learned that Plessy v. Ferguson was dead wrong -- no, separate is not equal and unequal racial treatment is a compelling reason to change. At the end of the day, it doesn't matter whether a person is or is not subjectively offended by segregation or by the word Redskins. As shown above, there are (and were) plenty of black folks who didn't want integration, and there are plenty of individual Natives who aren't subjectively offended by the word "Redskins." So what? Discrimination and racial disparities go beyond subjective tastes and instead is about how we treat entire races of people. Therefore, just like school districts had to do with segregation in Brown v. Board of Education, the NFL should have to explain why it's OK to treat Natives different than every other race.

I'm guessing there is no good reason; in this day and age, racial discrimination is a bad thing.

Moreover, this debate shows that Natives are perceived incompetent to determine what is or is not offensive to us -- non-Natives keep on telling us how we should feel! Just like in Plessy v. Ferguson -- most folks knew forcing black people into separate train cars was insulting and racist as hell, but the Supreme Court lied and said black folks shouldn't be offended by the arrangement. In the words of Ed Lover, "C'mon son!"

Separate is not equal, and non-Natives speaking for Natives is condescending and racist.

When it comes to the NFL, though -- a league whose player ranks are 66 percent black -- African Americans have a substantial platform and can wield tangible influence when it comes to addressing issues of race. Black folks are powerful in these conversations -- and it's beautiful when you see black folks exercising that power and bringing up conversations of social justice in regards to Trayvon Martin or Donald Sterling! Beautiful! But regarding the Redskins, however, many black folks haven't seen the connection to America's racist past against African-Americans. Many influential black folks have instead chosen to remain mute about this modern day "separate but equal."

Put it like this: if African Americans en masse called out the Washington team's name for what it is -- a modern-day separate but equal -- this debate would be over within six months.

African Americans hold that much power here. And to their credit, several high-profile black announcers -- Tony Dungy, Tom Jackson and Greg Gumbel -- have already said publicly that they would no longer use the "Redskins" name, because they refuse to be complicit in perpetuating the use of this derogatory term.

Thank you for that.

Still, there are many other current and former NFL-affiliated African Americans who don't see what the big deal is and remain silent. This is history repeating itself -- modern-day segregation -- and as segregation ultimately showed, treating someone differently because of their race is unacceptable. You know that better than anybody.

Is it your job to change this? Maybe. Maybe not. But should you care? Absolutely -- it's racist history repeating itself. We're in this together.

Thank you for hearing me out. Let me know your thoughts -- my Twitter is below.

Gyasi Ross is a father, an author and an attorney from the Blackfeet and Suquamish Indian Reservations. He is the author of two books, How To Say I Love You In Indian and Don't Know Much About Indians (but I wrote a book about us anyways), both available at www.cutbankcreekpress.com. He also writes his own column for Indian Country Today Media Network called "The Thing About Skins."