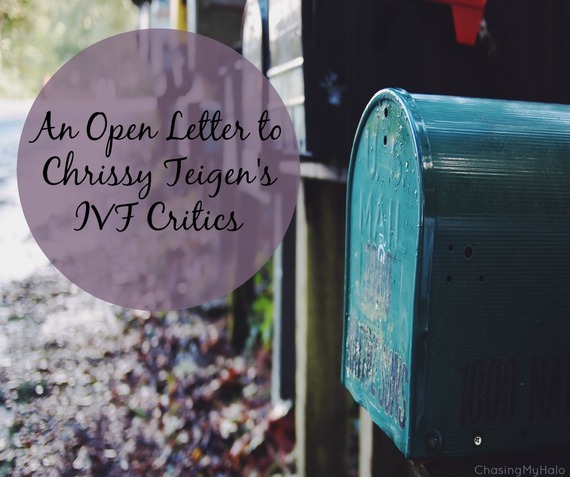 Let me start by saying that I'm sure your opinions come from a good place. A place of concern for the overall mindset of our culture perhaps, or maybe your interest is more along the lines of science and man's role in creating life. Whatever made you vocalize your opinion on one couple's choice on how to bring a life into this world, I'm sure that somewhere deep down there were good intentions.

Some of you even seemed okay (or at least, kept quiet) when Chrissy Teigen and John Legend announced they were pregnant via IVF, but then when you heard they went through gender selection you about lost your minds (and with it, apparently, your filter).

Some of you even went public with articles liking their decision to "picking out a pair of shoes" and "Teigen took what was a very difficult journey and made it into a shopping trip, albeit a physically demanding one." Many of you called their decision and IVF "unnatural," and my favorite closing comment "In her announcement, she reinforced the superficial marketing, the casual relationship we've developed with reproduction and the cultural narrative that life exists (and ends its existence) at our whim." This from a woman who struggled with infertility issues herself.

I have so many things that I want to say to you, more than I can address in this post. While I haven't personally sat down and talked to Chrissy I'm currently walking in her shoes, (minus the whole supermodel thing) and have a few choice opinions on this subject.

What about Man playing God? Have we gone too far? Women. Christian women. Do you not have enough knowledge of God to know that if He doesn't want life created it's not going to happen? That embryo that doctors helped along in the lab had origins from God far before the fertility specialists got there. Besides, even after the embryo's chosen it still needs to implant and be carried to term. When it comes down to it there's only One who can ultimately create life. God's still in control whether it's an accidental pregnancy of a 16-year-old or a 40-something-year-old woman undergoing IVF.

Is it "natural"? Are we really still having this conversation world? As you sit on your synthetic couches eating food with ingredients you probably can't pronounce, in bodies that have most likely ingested medications and accepted other "unnatural" help over the years? The irony is that the unnatural (in my opinion) could be a contributing factor to infertility in the first place. So while we do our best to reduce unnecessary chemicals, the fact of the matter is that often times they are necessary to live a healthy life.

When I'm sick I go to the doctor. When I lost several teeth in a car accident in high school I got dental implants. Unnatural, titanium implants so I could chew my food and not have full dentures at seventeen. Every day man uses science to help us with illnesses and medical issues. Infertility is a disease that affects one in eight, so why do we treat it so differently? Why do we take an already sensitive issue that cuts to the core of who we are as women and men, and put it on display for others to throw stones at?

As for the gender selection. It's not like they went into the clinic, able to conceive naturally, and demanded a girl regardless of cost. This isn't an issue of sexism. When embryos are frozen they're tested to make sure they don't have any chromosomal abnormalities that could inhibit success. As someone who has suffered a miscarriage, I can tell you firsthand that my husband and I would do anything to not have to go through that again. So when this technology gives us a 25-30% better chance of not having to, we are going to choose it every time. As a byproduct of the testing, some clinics will offer gender selection. It's usually not advertised, and in all my research and dealings I've never had it offered to choose things like physical traits (which is what you often hear in arguments). That's not to say it isn't happening somewhere, it's just to say it's not the norm with IVF.

So Chrissy and John chose to have a girl. The embryos were already being tested for health and if they wanted to choose a girl that's their choice. It's not the way my husband and I are choosing to go with our IVF journey (if we are blessed enough for it to work), but that doesn't make their decision wrong. That newly created life is still a miracle, and their beautiful little girl will be just as "natural" as all her classmates. 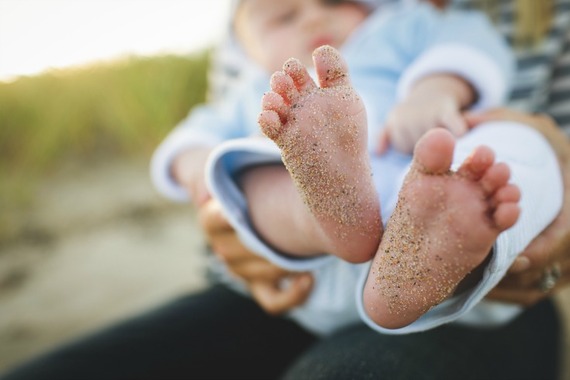 Angie is a Life & Style Blogger at Chasing My Halo, where she hopes to inspire others to live full lives with full hearts. She is happiest at home in Seattle with her husband and fur loves, and is often found playing beach volleyball or sipping a chai latte with friends.