Before responding to your article on Bernie Sanders on Medium, I want to take a moment to acknowledge you and the work you have done for Latina/os, workers' rights, unions, the feminist and LGBTQ movements, as well as against police brutality and pesticides. You stood up and gave a voice to the less fortunate and unrepresented parts of our communities, no matter what obstacles or challenges were thrown in your way. This is exactly why your article on Bernie Sanders came as such a surprise to me -- that the same woman who has made it her life's mission to speak the truth and shed light on corruption, lies, and false narratives created by the corporate elite and special interest groups, would now suddenly create a narrative that distorts facts and misguides American voters.

Just like you stated in the above quote, I, too, believe in the American ideal of reasonable and robust debate between opposing viewpoints in order to move a discussion forward and ultimately arrive at a sensible resolution. This becomes impossible, or at least unnecessarily difficult, when one of the parties involved is purposefully trying to obfuscate the facts. I recognized that very same tactic that the mainstream media has been using when I read your opinion piece, where the details of Bernie Sanders' voting record and positions were misrepresented and, again, when you and America Ferrera spread the false story on Twitter that Bernie supporters chanted "English only" at a Nevada caucus. Though it was debunked by multiple media outlets and video evidence, neither of you have corrected, apologized for, or taken down the posts. It's race baiting, misleading, divisive and inaccurate and I hope you both will rectify that immediately. Regardless of either your interpretations of the event, the guidelines strictly prohibited any form of communication with caucus participants by campaigners once the caucus was called to order!

The democratic process, as it was intended, is quite simple: Present your facts, track records and plans, move forward honestly and openly, debate, call out discrepancies, explain and educate, then let the American people decide whom they would like to lead the country based on such answers. By distorting and omitting facts you do not give us, the American people, a transparent picture. You cheat us out of making an educated and well-informed decision and dishonor our voting process and democracy itself.

"Hillary Clinton's track record goes directly against what you and every other activist before and after you has fought for."

My intention is not to tell anyone how to vote, but instead offer the facts and invite you to a healthy dialogue and debate.

So let me address your statements made:

-- The words "indefinite detention" did not appear anywhere in the bill Bernie voted for. The bill only applied to people awaiting deportation ("under orders of removal"), often for having criminal records.

-- The Congressional research office said people could be detained indefinitely under the bill if they were "specified dangerous aliens under orders of removal who cannot be removed." Only about 4,000 people had been detained for more than six months as of 2009 -- and the bill Bernie voted for would have required review of their detention status every six months.

-- The bill split liberals in Congress, with some voting against it and many others (including Nancy Pelosi, Hillary supporter Sherrod Brown, and DNC chair and Hillary supporter Debbie Wasserman Schultz) voting for it, along with Bernie.

2. About the 2007 bill you criticized Bernie for voting against and have made your main argument:

He supported the DREAM ACT, but the entire bill had too many sections that would have been detrimental to American workers, immigration reform, immigrants and their families, so he ultimately decided to keep fighting for a better bill. A couple of the more contentious points were:

-- It stepped-up border security, adding 20,000 more Border Patrol agents and 370 miles of additional fencing (you might call that "Trump wall" building) along the U.S.-Mexico border.

-- It removed four of the five family-based categories under which an immigrant could apply for permanent residency. All that was left was the preference for spouses and children of U.S. citizens (which strikes me as a form of privilege).

-- It expanded the horribly abusive guest worker program that has left some people in what the Southern Poverty Law Center calls "close to slavery" in its report on the subject. (There are other horror stories, too.)

-- The League of United Latin American Citizens (LULAC) and the American Federation of Labor and Congress of Industrial Organizations (AFL-CIO), a federation of our country's largest trade unions, both opposed the bill. LULAC's Executive Director said the group "cannot support a bill that will separate families and lead to the exploitation of immigrant workers while resulting in widespread undocumented immigration in the future."

-- The AFL-CIO compared the exploitative nature of the guest worker provision to a "modern-day Bracero Program," referring to the program launched during the Second World War to meet labor demands in the United States -- one which led to the forced deportation of millions of Mexicans, including a few U.S. citizens, from the United States under Operation Wetback beginning in 1954. (Article by Hector Luis Alamo here.)

3. You mention that Bernie did not sign Harry Reid's letter to president Obama in 2011:

-- The letter was written and issued by 22 Senate Democrats. It was not presented to the entire Senate for signature, nor to Bernie Sanders (an independent at the time), and was signed by only a small fraction of the Democratic Party.

-- Hillary Clinton did not respond to the letter sent to Obama. She did not denounce the deportations at that time, which makes the whole mention of the letter unreasonable.

-- The majority of politicians involved agreed that it actually didn't do anything, since the Customs and Border Patrol said it directed them to do what they were already doing anyway.

-- Hillary was blatantly misleading in the debate when she said Bernie "sided" with "hardline Republicans" on it, since 76 other Democrats voted for it too. She made it sound like it was just him and the extremist right-wingers. The ranking Democrat on the Homeland Security Committee said of the amendment "If people want to put it in the bill, I guess that is okay because it apparently does nothing."

5. Your claim that Hillary has a better immigration track record and plan. Let's compare a few of their points on each subject: 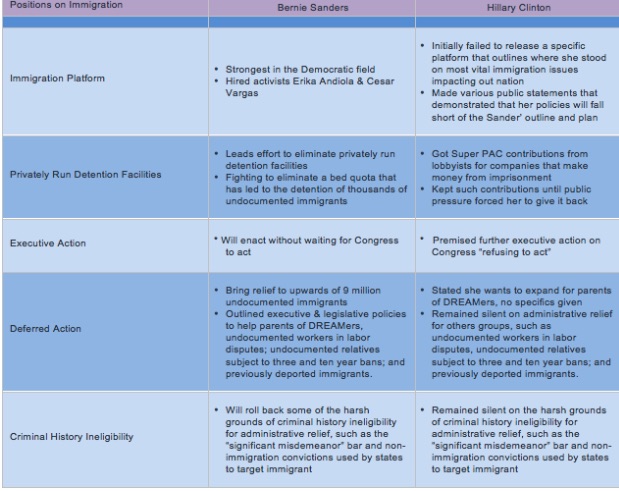 About your side comment of "not knowing where Bernie Sanders stands" and "Hillary Clinton being on the right side of history": 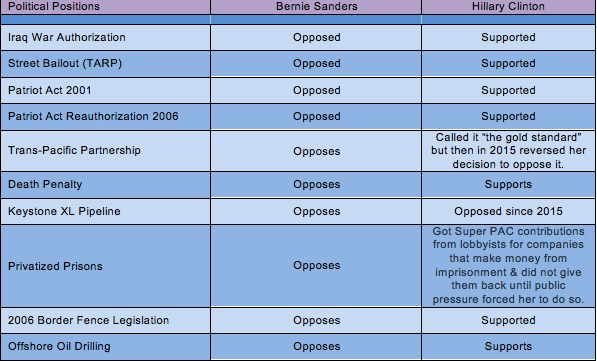 Hillary Clinton's track record goes directly against what you and every other activist before and after you has fought for: the rights of the people based on the Declaration of Independence and the principles of life, liberty, and the pursuit of happiness. Those are principles that Hillary did not uphold when taking away American citizens' freedom by voting for the Patriot Act, twice; by not treating all men as equal when going against same-sex marriage until 2013; and when she sold out her own citizens by taking money from lobbyists and promoting the rise of the private prison complex. This has led to modern-day slavery for the impoverished, and especially forLatino and African American communities. She has put corporations and special interest groups before the people of this great country by voting to bail out banks and not her constituents. She does not uphold the sanctity of life when endorsing wars, condoning fracking or the death penalty.

Bernie Sanders, the proud son of an immigrant, wants to raise the minimum wage and make it easier for workers to join or form a union. He led the first civil rights sit-in in Chicago history, protesting the University of Chicago's segregated housing policy; walked alongside Dr. Martin Luther King, Jr. during the 1963 March on Washington, supports ending all family deportations;l and is the leading voice on issues of income inequality, global warming, LGBTQ issues, and universal health care. He is transparent and consistent and has been, time and time again, on the right side of history fighting for all of us and our rights. He has done so, oftentimes when it was unpopular to do so, because he didn't need public opinion to evolve in order to take a stand.

"I am surprised, dismayed, and concerned that you would do your legacy such a disservice by becoming an instrument of the establishment."

That is leadership and vision. Bernie is the only candidate running who will not blindly lead us into another war. He is using his position to champion free higher education for our children and fight for the future of our country. He has refused to take money from Super PACs and special Wall Street interest groups, inspires participation and engagement with his constituents, and once in the White House will leave the door open for average citizens to become active participants in government. This is the cornerstone of the political revolution he has inspired.

Dolores, I am surprised, dismayed, and concerned that you would do your legacy such a disservice by becoming an instrument of the establishment, rather than joining this movement to create a better America like you once inspired us to do.

I write this letter in the hopes that we can continue to have a robust and honest conversation based on the facts and on the actions that Bernie Sanders and Hillary Clinton have taken during their legislative careers. I, like you, continue to be encouraged by the millions of young people that have flooded the streets demanding that we address issues of race and power, class and privilege. They show us what true inclusion and democracy looks like. From #BlackLivesMatter to the migrant rights movement, young people are pushing us to live up to our highest ideals and values. And today, young people are demanding that Bernie Sanders is allowed to run in a fair and transparent primary. This election is too important to do anything less.