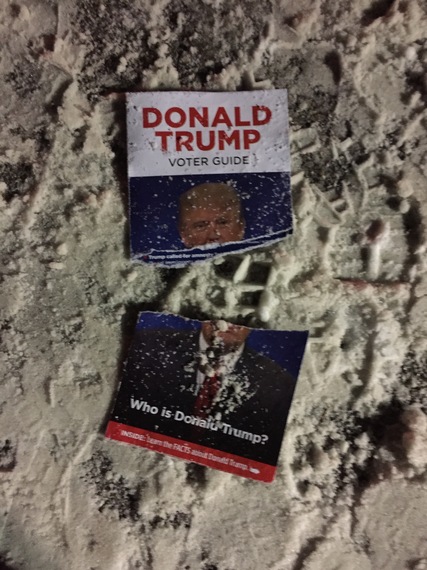 I never want to have the Zika virus. Clearly it would destroy everything that I hold dear. Still, it is out there and I feel obligated to understand what it's all about. Just in case. Which brings me to Donald Trump.

I know he's out there. They mention him a fair amount on the news. Still, honestly, there is not a single person in my social circle who admits they'll vote for our first carrot-colored candidate. This is most likely because I live in lovely, liberal Los Angeles and hang around with people who aren't filled with rage and hatred on a daily basis. (Unless you count my teenagers.)

Still, if for no other reason than self-preservation, I really should try to understand why a large number of voters don't think he's the Anti-Christ with a comb over. He could actually be in charge of our lives in a few months. So, since I have nobody to consult personally, I figured I'd just go public and see what it is I'm not getting:

How's your day? I don't mean to upset you - from what I've read, you're pretty upset already - but I have a big favor to ask. I need you to explain your Trump love to me. I realize I'm one of those smug, elitist, graduate school-educated, tree hugging, George Clooney movie-watching, socialist sympathizers your leader isn't fond of. However, I am a middle-aged out of work white guy so we do have some common ground.

I admit that you and I didn't get off to the greatest start. Months ago, I went to a Trump rally in New Hampshire to meet you. However, it was like being surrounded by every character who ever picked on Anthony Michael Hall in a John Hughes movie. And every time the PA announcer urged you to keep your hands off protestors, you booed lustily. So I didn't dare speak to you that night. I'm fine with the idea that a presidential candidate doesn't back down from a fight. It's just manufacturing that fight and then blaming the other side for it seems somewhat dangerous.

There is plenty for us to agree on. From what I can tell, you've attached yourself to Donald Trump primarily because he's not a party hack. He's someone who speaks off the cuff, regardless of how people will perceive his words. And I am totally on board with all of that. In fact, I recently wrote an entire book devoted to the notion of non-traditional presidential candidates - The Can't-idates: Running For President When Nobody Knows Your Name. I'd love to see a political newcomer seriously contend for the presidency.

However, even the guy in my book who goes by the name Vermin Supreme and wears a boot on his head while promising free ponies to everyone seems less volatile than Trump. Whenever your drunk uncle goes off on a political rant at the Thanksgiving dinner table, you nod politely and hope he passes out soon. And I'm not entirely clear on the difference between his views and Trump's fact-adjacent tirades warning of all the new boogiemen out there eager to destroy us.

Your candidate has not exactly been encouraging to a non-Trump voter like me. Unless I'm reading every single one of his speeches wrong, if you're not with him, you're not only against him. You're the problem. I can't get him to be more understanding of alternate points of view. That's why I'm hoping you'll understand that no matter who wins the election, we're all going to have to learn to peacefully coexist despite our difference. You know, kind of like the Brady kids had to do when Mike and Carol got married.

It would be awesome if at least you and I can focus on our mutual love for a country that lets us adore and ignore whatever we'd like. Movies. Clothing styles. Kale. You go your way and I'll go mine. With respect. I'd also love it if you could explain to your guy that while it's fine to fire everyone who disagrees with you when you run a company, government doesn't work that way. He can't fire every American who dislikes his policies. At least I hope he can't.

Look, the benefit of being liberal is a willingness to allow multiple points of view. And I am happy to temporarily set aside such trivial Trump details as his race baiting or his allergy to truth or the creepy way he talks about his daughter. I mean, there has to be some redeeming quality in the Republican nominee that my evil leftist bias won't allow me to see. And since The Donald probably won't have time to explain himself to me, I am counting on you to show me what I'm missing.

I feel good about this! I think we might be able to make some progress here. We're all in this together, after all. Like we say here in Hollywood, let's do lunch! The taco bowls are on me!