It is critical that candidates for the highest office in the land release their income tax returns for multiple years, especially you Mr. Trump. After all, you are running for president based on your wealth and business ability. And every other presidential candidate has done so for the past 40 years.

Instead, you're hiding behind the phony excuse that you can't release any returns until the IRS finishes auditing them, which might not be until after Election Day. The IRS has repeatedly stated that taxpayers can release whatever information they want about their own returns, whenever they want. (Of course, the very fact that, by your own complaint, you're audited every year raises important questions about whether you are a tax dodger.) Nothing prevents you from releasing your tax returns prior to 2009, which have been cleared by previous IRS audits.

You said Mitt Romney should release his tax returns when he ran for president in 2012. Now is not the time to be hypocritical. And, by a two-to-one margin, the American public wants to see your tax returns, according to recent polls by The Washington Post/ABC News and The New York Times/CBS News.

What exactly are you afraid the American people will learn about you and your business dealings if you release your tax returns? Could it be:

You're not paying any federal income taxes? Real estate tycoons like you have myriad ways to zero out your tax bills. You can borrow money against your hotels and apartment buildings and live off those loans, which are not taxed. You can take hefty tax deductions by claiming your buildings are depreciating in value, even as their value keeps going up and up. You can even swap a piece of real estate you want to sell for a new one, thereby deferring capital gains taxes indefinitely. Are you living tax free like you did for at least two years in the late 1970s, Mr. Trump? Are you forcing the rest of us to pick up your tab?

You're paying rock bottom tax rates by exploiting One Percent tax loopholes? Rich people like you often pay lower tax rates than working people. That's because we tax wealth less than we tax work. Money made from Wall Street investments and real estate--capital gains and dividends--that mostly benefit those at the top is taxed at as little as half the rate that money made from work is taxed.

Your fellow billionaire Warren Buffett has lamented that he pays a lower tax rate than his secretary. Mitt Romney, a private equity multimillionaire, paid a 14% tax rate the year before he ran for president. That's about half what a lot of teachers and electricians pay. How little are you paying, Mr. Trump?

You're not as rich as you claim? Income tax returns don't list assets, but from the kind and amount of income you receive from those assets, a pretty good estimate can be made of just how rich you really are. Outside experts have already determined from your earlier financial disclosures that you've greatly exaggerated your wealth. Would your tax returns prove you were even a bigger fibber?

You've got shady business dealings? The Panama Papers have revealed just how much the rich and powerful use offshore shell companies and other accounting tricks to hide what they're doing with their money. You own 240 limited liability companies (LLC's), which operate your real estate holdings and other businesses. Are any of those registered offshore?

What about the income you generate from properties offshore and the licensing of your name overseas. There is even speculation that your name may be trademarked and owned by an offshore shell company located in a tax haven, which could license its use in order to dodge paying U.S. taxes. Do you use these or other offshore tax loopholes to obscure your business dealings? If so, how much do they cut your taxes?

You're a cheapskate when it comes to charity? Your tax returns would tell us just how much of your wealth you've given away recently, and to what causes. For instance, you claim to have given away $102 million to charities over the last five years, but an analysis found that not a dime of that money was contributed by you personally. You also claim to be a big funder of veterans' groups--your returns would back that claim up if true. It's easy to talk big about supporting veterans and others that need our help. Are you as generous with your money as you are with your words?

How much would you save in taxes from your tax plan? It is estimated that your tax plan will cut the taxes owed by the top 0.1 percent by an average of $1.3 million in 2017, and by $275,000 for the top 1 percent. The corporate tax rate will plummet from 35% to 15%. Your tax returns will give us a very good idea of how much you will benefit, Mr. Trump.

So, what do you have to hide, Mr. Trump? We deserve to know. 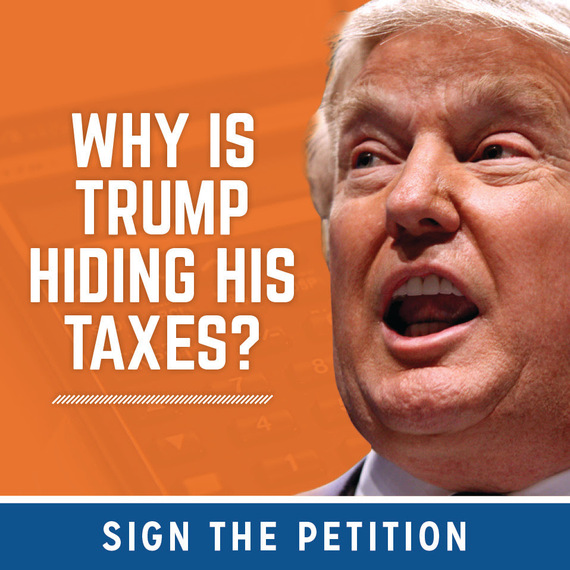