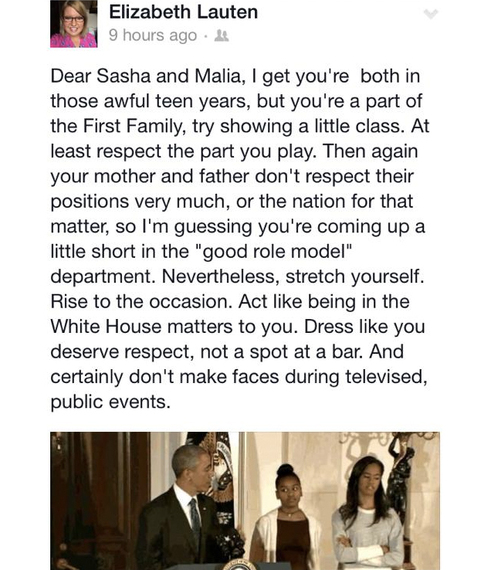 I've just read your Facebook letter to Sasha and Malia Obama, followed by your apology.

First off, I am impressed that the Communications Director for a Congressman would take time out from her busy and important schedule to address herself to the sartorial state of the Nation's First Daughters. I immediately checked your Facebook page to see what other gems I could gather. But I was sorely disappointed. All I saw was a photo of the Court of Neptune fountain at the front of the Thomas Jefferson Building of the Library of Congress. Did you know that Neptune had a really bad temper? I'm not sure you should be promoting him.

Because you are in the inner circle of movers and shakers of DC, you must know more about Sasha and Malia than I do. I only know that they appear appropriately and immaculately dressed in all photos I've seen of them, and I've never heard anything about them engaging in any unseemly or illegal behavior. But, again, you know more than I do, so I defer to you.

I wish you had been in such a position of power back in the Bush Administration, when the Bush twins were on their game. The string of news items involving their partying and scrapes with the law, underage drinking, illegal procurement of alcohol, and marijuana use were never ending. But maybe the fact that they were the daughters of a Republican president would have given them immunity from you. Or maybe they had cute clothes that you approved of.

I also wish you had noticed that Sarah Palin's daughter Bristol, an unwed mother, was recently involved in a drunken brawl. I don't remember what she was wearing during the pregnancy and brawl periods, but I can only assume it was appropriate and so it escaped your commentary.

I deeply regret that your innocent caution to Sasha and Malia about their clothing choices would cause such a stir as to result in your having to resign from your exalted position. You said:

"I reacted to an article and quickly judged the two young ladies in a way that I would never have wanted to be judged myself as a teenager. After many hours of prayer, talking to my parents and re-reading my words online, I can see more clearly how hurtful my words were. Please know that these judgmental feelings truly have no place in my heart. Furthermore, I'd like to apologize to all of those who I have hurt and offended with my words, and pledge to learn and grow (and I assure you I have) from this experience."

Wow, Liz, "many hours of prayer?" Gosh, it took you that long to see that your words might have been hurtful? Then again, your political party doesn't respect its position very much, or the nation for that matter, so I'm guessing you're coming up a little short in the "good role model" department. Nevertheless, stretch yourself. Rise to the occasion. Act like being a civilized person matters to you. Write and speak words that deserve respect, not condemnation. And certainly don't make a spectacle of yourself.

If this isn't possible, perhaps Sarah Palin or Bristol Palin would consider hiring you to do their PR.

Best,
Life in the Boomer Lane