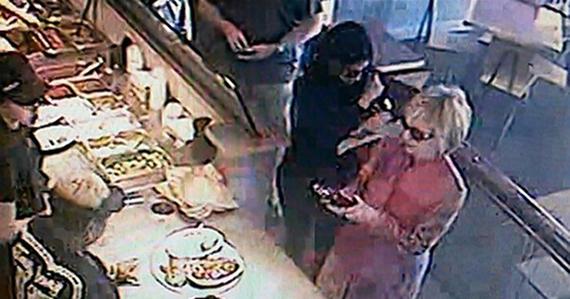 Dear Hillary...
You can count me as one of your biggest fans, and a huge supporter of your bid for the presidency. You've probably got some of the best, most highly paid political consultants planning your every move, but stop listening to them. I already don't like what I see. So I'm going to give you some valuable advice which I hope and strongly suggest you immediately follow.

For starters, knock off the folksy routine. You don't do folksy well. That's Bubba's territory. This includes talking in corny fake Southern drawls, laughing hysterically for no apparent reason, and stopping off at Chipotle as if a Burrito Bowl and you are best friends. And, for Pete's sake, you and Huma (Abedin) need to take the shades off indoors. You look like Thelma and Louise.

Just be yourself. You're smart, charming and highly accomplished. Besides being a brilliant lawyer, you've been a successful First Lady, U.S. Senator and Secretary of State. And (and please listen to this very closely), you're a woman. A woman. And it's time for a woman president. A president who will champion women's issues better than any man can. There's 161-million women in the United States, and 102-million of them voted in the last presidential election. See where I'm going here?

Listen to me, Hil. You can get a majority of these women to vote for you, and not just the libs. Oh sure, those red state ladies will appease their small-minded, misogynistic mates and pretend they'll be voting for Jeb Bush, Rand Paul, Marco Rubio or some other 1950s-minded, red-blooded Republican male. But when that curtain closes, millions of them will jubilantly yank that lever for you. I promise you. But you have to follow my direction.

So here's the plan: talk about women's issues as much as Herman Cain mentioned "999." The right to choose. The right to top-paying jobs and equal pay. The right to marry another woman. The right to affordable health care. The right to better maternity and family leave. Protection from domestic violence and rape. Better education for children. Constitutional equality. Equality. Say it again: equality. The more you talk about women being equal, in every way, and the more the GOP Boys' Club pushes policies that continue to relegate women to second-class citizenry, the more of a cake-walk this will be for you.

I want you to hammer this theme home so hard that Rand Paul wishes he'd be locked in an NBC green room with Savannah Guthrie and Kelly Evans so he doesn't have to hear it anymore.

To be sure, you won't get the Michelle Bachmann-like crazies on your side. These Stepford Wives will still vote for whichever male candidate the party nominates. But one thing is certain: if given a choice between some rich old sexist white dude and a woman, many millions of moderate Republican and independent women will proudly and emotionally (and secretly) cast their votes for you.

You have a colossal advantage here. Don't try to be like everyone else. You're the only woman in the race. Pounce on that. Own it. It's time to make history again....