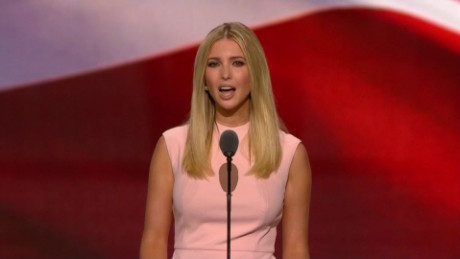 Few would argue against the idea that you are a poised, articulate, capable young woman. You have lived a life of privilege, without coming to the conclusion that this makes you entitled. I applaud you. You deeply respect and greatly admire your father. No parent would ask for more.

Your speech at the RNC convention was directed mostly to women, as this is your main focus. As a woman, I applaud you for that. But, as a woman who is aware of more than the rhetoric of self-promotion, I see your statements in a different way.

You say your father respects women. But you could fill a book with all the crude and misogynistic rhetoric he used on his appearances on the Howard Stern show. And saying that "pumping breast milk is disgusting," that the sexual assault in the military is totally expected, and using words like "pig", "ugly," "fat" and an assertion that a journalist has "blood coming out of her wherever" to women who challenge him speaks not of respect, but of degradation.

You say, "As president, my father will change the labor laws that were put in place, at a time when women were a significant portion of the workforce. He will focus on making quality child care affordable and accessible for all." For women in the workplace with children, affordable childcare means economic opportunity. But your father intends to punish women if they have an abortion. While affordable child care is a boon to working women, the decision to bear those children in the first place is a right that is even more fundamental.

You say you remember your father "tear stories out of the newspaper about people he had never met who were facing some injustice or hardship." He would then "request that the person be found and invited to Trump Tower to meet with him." This speaks of compassion. But to invite people to talk on a one-on-one basis, or even to help them out financially,while entire populations of others are either marginalized or demonized speaks not of compassion but of demagoguery.

You have converted to Orthodox Judaism and are proud to be an observant Jew. Yet your father's supporters have had hateful and alarming comments to make about Jews, eerily reminiscent of the years leading up to World War II. I have not heard your father condemn these people.

I like to be entertained as much as the next person. But after the balloons come down and the delegates go home and the convention center is silent, I am faced with the prospect of a potential president uses both words and actions to show a disrespect for women, for black people, for gays, for people with disabilities, for Muslims, for immigrants, and for anyone who disagrees with him.

I'm reminded of the old "All in the Family" show, in which Archie Bunker sat in his easy chair each evening, dismissing any group of people who he considered beneath him. I laughed at the absurdity then. But I can't laugh now. I can't dismiss your father as a buffoon or a showman. I am a member of two of the groups that have been marginalized by his rhetoric and that of some of his followers. And I am the daughter of immigrants, who, if not having come here illegally, came here in a legal grey area. Your father's comments hit too close to home for me.

So, Ivanka, continue to love your dad. Continue to love and protect your family. I wish you the best. Just know that most other women out there are not viewed as favorably as you are in your father's eyes. And also know that after the balloons drop, they will begin to deflate pretty quickly. What will be left then will not be a joy. It will be a mess that someone else will have to clean up.

Best, Life in the Boomer Lane