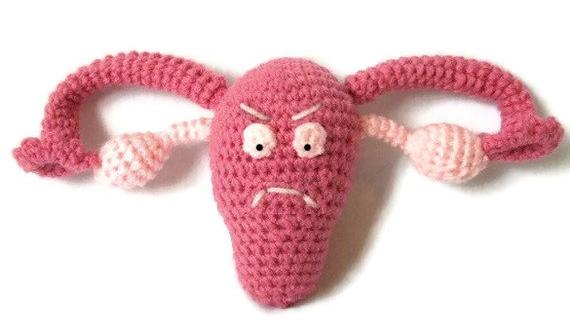 I thought it was time I wrote you, my dear ovaries, a letter. Word on the street has it that you are not happy about the fact that you are still in business.

I don't blame you. You've been doing the whole egg release thing since I was twelve. I'd be bored if I had the same job for 37 years, too. But rather than just pack up and close shop like most middle-aged ovaries would do, you just keep on truckin' on. And then every month you make a big stink about the fact that you're overworked and underappreciated.

Recently you even enlisted the help of Ursula, my uterus. Now all three of you are protesting each month.

Is this my fault? No! I was perfectly okay with the idea that you could go into retirement at this point in my life. My kids are teens. Older teens. As far as I'm concerned, the kitchen is closed. There will be no more buns in the oven. I actually think there is a design flaw here. I think once I made the decision I was done having kids, you all could have just shut down production. Closed the plant. Moved to a senior community in Florida or whatever it is that retired ovaries do during their golden years. Yeah, I get that there are some important hormones that you make that keep my bones strong and my mood stable. But clearly that last part isn't working so well anyway.

I don't mean to sound like an ingrate, because you ladies have served me well over the years. You (along with my husband) are responsible for the two greatest joys in my life. Of course I could have done without the thirty-six hours of labor for the first kid, but I don't think that was your fault. Then there was that cyst on Jezebel that hurt so bad I wanted to punch Bill O'Reilly. (I actually wanted to do that anyway and was just looking for a reason, so thanks for that). But overall, you two have been pretty awesome.

But lately, you've been showing your mean side. Awful cramps. Erratic schedules. Bloating. Seriously, I get that you're unhappy, but do we really need all the drama?

Get with your ovary union. Tell me your demands. I'm sure we can reach a settlement.

This country was built on cooperation and compromise. Just ask the federal government! On second thought, scratch that.

I think we all know it's time for a change. Do you really want to be the oldest functioning ovaries on the block? There is a great deal of honor in quitting at the top of your game. I, personally, would be happy to give you an award for your years of service. You have functioned ovary and above the call of duty.

I was told that this time in our lives is called Peri-menopause. I'm not sure who this Peri chick is, but I don't think she was invited to the party. Let's work together to kick her out of the sorority and let Menopause hang out with us. I actually think she'd be a lot more fun...