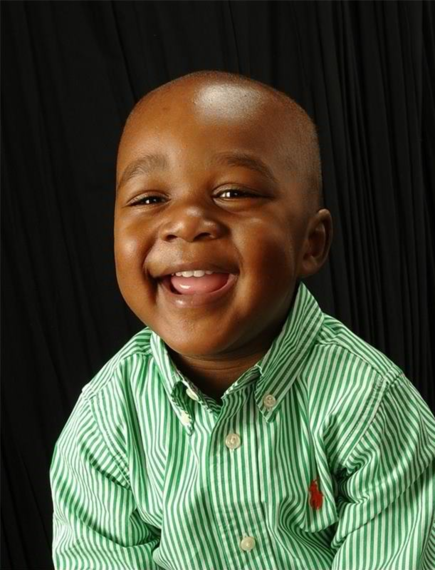 Mommy has something important to tell you about your chocolate skin. Please listen carefully. I'm going to start from the beginning.

As a journalism student at The Ohio State University (OSU), I wrote articles about the unjust treatment of African Americans and other races on college campuses and across the country. I remember crying my eyes out as I wrote, "All is equal and freedom rings, right?," which talked about the unspoken prejudices against OSU students.

I graduated from OSU and went on to start a life as a working adult. I stumbled along the way in my career and love, eventually marrying your dad in 2007. We worked hard in those first few years, before you blessed us with your presence and we were able to buy a house in the suburbs to give you a better life than either of us had.

In 2008, the United States of America elected Barack Obama as our 44th President. I glared in amazement at the television as President Obama gave his inaugural address. We did it! We did it!

Next morning I ran out to buy a copy of the Cleveland Plain Dealer, which showed the president in full color on the front page. Although you were just a mere thought, I saved that newspaper clipping for your scrapbook because I wanted you to see that you have the power to be anything your heart desires.

We thought America was changing.

And we no longer feared bringing an innocent child into the world. Kids from my predominantly white elementary school called me all types of derogatory names. But my son wouldn't have to feel the hurt I did. Things were better, and your father and I were convinced that while the world was still racist and corrupt, you wouldn't have to endure name-calling and unjust treatment.

We excitedly planned for your arrival.

In 2011, we welcomed you, our precious baby boy, into the world. You were beautiful. And we were hopeful that America would wrap you up in her arms just as we did.

In 2013, we enrolled you in the area's most highly regarded preschool. You were surrounded by the sons and daughters of doctors, lawyers and CEOs, and we were proud to provide you with the best possible education. After just a few short months, your dad received a call from the preschool director telling us that you were no longer welcome at the school.

I was in complete shock at what I'd heard and immediately called the school to hear more details. The director claimed you were "terrorizing" the other kids. She went on to say that your teacher threatened to quit if you were not removed from her classroom.

These were pretty strong words about a two-year-old boy. So I asked the director to tell me what you did specifically. And she said you were talking during nap time, hit a kid in the head with a Lego, and would not sit during circle time.

Now, I know you're very rambunctious, but the funny thing is that I witnessed other kids hitting and pushing you and one even picked up one of those little dust brooms and attempted to brush your hair with it. And no one said anything.

Son, your father and I are truly sorry for sending you to a preschool where you were singled out and treated unjustly because of your brown skin.

Your parents are absolutely not perfect.

We snuggled you oh-so tight in our big house, nice cars, expensive vacations, name-brand clothes and college educations thinking we could shield you from stereotypes and discrimination based on what you look like. We thought we could protect you from racism if only because we earned enough money to give you access to the finer things in life.

Son, we were wrong.

The truth: your suburban lifestyle and the things you possess  -- Ralph Lauren clothes, Nike Air Jordan tennis shoes, Apple iPad and even all your Thomas & Friends trains don't matter. No one even cares that, at the age of three, you know your ABCs, can read, and can count to 10 in Spanish. (Mommy and Daddy care  --  good job, son!)

The fact is, some people in this country will first and foremost only see your chocolate skin.

And they will judge you for it. They won't want to hear what you have to say. All that will matter to them is your skin tone.

It hurts my heart to tell you this.

But it's better if I tell you. This way you won't learn it as you're staring down the barrel of a police officer's gun. Or from a judge who sentences you to jail for a simple traffic stop. Or from a hiring manager who tosses your résumé in the trash after he sees "Alston" is the name of an African-American man.

You see Trayvon Martin, Michael Brown, Eric Garner, Tamir Rice, John Crawford III, Sean Bell, Amadou Diallo, Oscar Grant and too many others to list all lost their lives because of their brown skin. And I can't have that happen to you.

Your dad and I will give our last dollar for you. And, son, if we thought we could buy you justice, we would spend every waking moment trying to earn enough money to pay for it.

I know we tell you never to say "can't" because you can do anything, but this is something we are unable to control. We hope one day soon -- before you have to experience the cruelty of this world without our shield -- ALL lives will matter.

Until then, we want you to know that your brown skin is a gift from God. And you don't have to be ashamed because your brilliance will shine so bright that those who come in contact with you will be left color blind. That is our prayer for you.