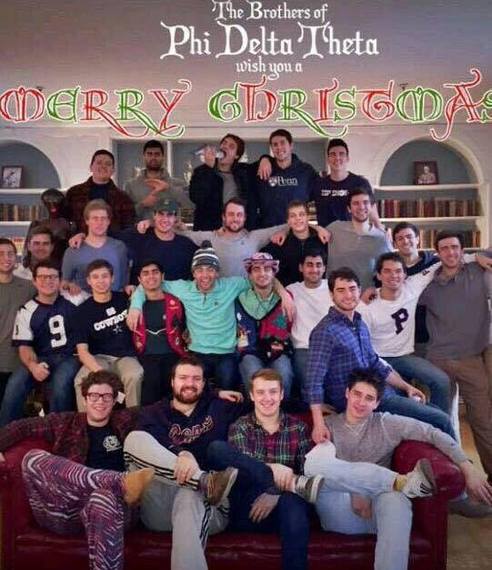 Dear members of the Pennsylvania Zeta Chapter of Phi Theta Delta Fraternity at the University of Pennsylvania,

I am a fellow Penn alum who has previously challenged neighboring white Greek fraternities that are part of our campus' Pan-Hellenic community. It was less than a year ago when Penn's Chi Omega Sorority and Beta Theta Pi Fraternity thought it was okay to throw a "West Philly Gangsta" party featuring their members dressed as thugs with faux-tatted "thug life" insignia on their knuckles.

At the time, we were told it was a misunderstanding and fought for a public apology. We finally got one -- reluctantly -- and suggested that racial sensitivity training for Greek members would be the best solution. Because at that time, you all played the victim role, arguing that you didn't know any better and that race was not the issue.

So when I saw your recent holiday card, which you so proudly allowed social media and the larger college community to view, feature a black female blow-up sex doll, I nearly fainted.

But it was. Not only did I begin to ponder what justification you would produce to explain this offense, your public apology only made it worse.

You all said you were sorry (figures), and that it was a gift blow-up doll that was supposed to be Beyonce.

Oh, so you thought that making a mockery of a black female celebrity body would not be just as disgusting as mocking a black student on campus?

I am not going to ask what would your mothers think, because I clearly don't care. But as a black male alum who has current and future black sisters who will grace the steps of a campus where rape culture is still a problem, you can save your apology and your sexism. I am calling for your fraternity to step down, effective immediately.

Put any color that you wish beside that blow-up doll and it still would appear that you have no respect for the representation of women and your campus. Add the fact that you chose it to be a woman of color and wanted to blatantly showcase that for everyone to see is not just a disregard for how sexist you depict Greek life, it is a grotesque flair of elite white privilege that suggests that you simply don't care.

An apology is not going to simply cut it this time.

You can't act as though you didn't know better -- you did. And to add insult to injury, Jimmy Germi, president of your fraternity, is also the elected president of Penn's Interfraternity Council (IFC). Not only should he also step down, but it is a very clear sign that even those who have stepped to the leadership positions in place still do not respect the safety and equality of female bodies and black bodies.

And no, don't just consider this a black man arguing about race. Consider this a black male feminist arguing against racial insensitivity, rape culture, and respect for all genders that you all have clearly disregarded in your holiday card. I am not even questioning just your humanity for even choosing to publicly showcase this and find it acceptable, but your actual admission into a university that features various scholars and activists that could have taught you better.

But to point a finger at anyone else but yourselves would be a disservice, because I know if a black fraternity on campus would have done the same with a white blow up doll and called it Taylor Swift -- they would be considered racist, sexist, male-chauvinists and would be an endangerment to white women (as if they are not already depicted to be so already).

So what makes you any different? Because in my eyes, a black body is just as important as a white one. And whether you choose to use Taylor Swift as the depiction of that blow-up doll rather than Beyonce, you are still showing a horrific disregard for women.

Make this easy for yourselves, and collectively step down. The campus has progressed since my short time away from it in fighting these types of issues. They will not so easily back down this time. An apology is an understatement right now. Of course you are sorry. Sorry that you got caught. Sorry that your white privilege got the best of you this go-around.

I am calling for my alma mater to investigate this issue just as strongly as they would do if the blow-up doll in question was a tint lighter and the men in that photo were a shade darker. Enough is seriously enough.

If you all are men who represent a fraternity that is committed to the motto "One Man Is No Man," then the decision of one man who so boldly placed that sex toy in the photo should not be the only one who steps down. And if your slogan is "become the greatest version of yourself", then I hope that this isn't the best reflection of any of you.

Please step down on behalf of all women at Penn who felt threatened, to all black bodies who have endured enough sexual exploitation and disregard, and to your liberal arts university who should not and hopefully will not condone such unspeakable acts.

Ernest Owens
A black Penn alum who has had enough of the blatant disrespect.