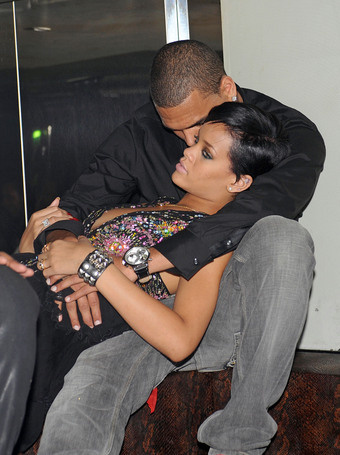 The only thing more shocking about what happened at the Grammys - Allison Krauss and Robert Freaking Plant winning album of the year (who put those two together and have you even heard of either of them in the past 5 years?) - is what didn't happen at the Grammys. Specifically that longtime R&B powerhouse couple Chris Brown & Rihanna were no shows. Not only did they not attend or perform as scheduled but Brown was taken into custody for "making criminal threats" and perhaps use of a deadly weapon in a domestic assault of the R&B umbrella star. Rihanna's rep says she is fine, naturally, but sources say she was hospitalized with bruises and welts.

So what happens now? I'm no celebrity and I'm certainly not a lawyer - I don't even watch SVU on TV (culturally irrelevant, that's me!) - but I have been a victim of dating violence. And I did what only about 5 percent of victims but 100% of feminists say to do: I pressed charges and took my boyfriend to court, eventually sending him to prison for felony sexual abuse. It remains to be seen if Rihanna will press charges (although the state can press charges independent of her) so I thought I'd offer my perspective on what it's like to Do the Right Thing.

Here's what happens if you take Chris to court: basically, you're eviscerated. What, your victims right's advocate didn't tell you about that? I'm not surprised. Despite her title, she doesn't work for you. She works for the prosecution. And they don't work for you either. Nor do the police. All those folks are just there to enforce the laws of the nation. Dealing with the myriad of feelings most victims experience just makes the whole affair messy. Which isn't to say that they don't want you to cry. Your tears only help their case. But make no mistake: it is their case they are worried about, not you.

The fun starts when the police take your statement. You may have already given one. It's the part where you tell your story and hope that it makes some kind of sense based on your fragmented and emotionally charged memories. I hope you did a good job because they'll tear it to pieces later. In fact, seeing as he was/is your boyfriend, you'll probably tear it to pieces later yourself, wondering if things really were as bad as they seemed at the time.

Which is when you'll pull out the pictures. Undoubtedly someone will have taken photos for evidence. Your bruises. Your blood. Your torn clothing. His wounds. His weapon. The crime scene. You might throw up. You might just be numb. Although from my experience, the real fear and anger don't kick in for months later. The physical evidence will eventually fade away - you do have marvelous skin; I'm sure it heals quickly - but the photos will be there lest you forget.

Next up is your testimony. You probably thought you were done with your affidavit - the one you signed with hands shaking so badly your kindergarten teacher wouldn't recognize your signature. But unless he plea bargains out early, you'll be stuck repeating your version of the events. And it will always be called that: "your version." It's not the truth. It's merely the truth as you see it. Or thought you saw it. Obviously you were upset so, you know, you might have missed a few things. Which of course you did. You're only human. The self-doubt, incidentally, will be the only emotion that the prosecution will not allow you to show.

And so you will tell your version to tape recorders, to lawyers for both the prosecution and the defense, to assistants, to your mother, to the court reporter. You will say it both on the stand and laying on the floor. And - this being the part I can't imagine having to deal with - to the public via television, radio and print interviews. Everyone will ask you questions. Some will sympathize with Brown. I'm telling you this as a girlfriend. It doesn't matter how clear-cut your case is - and domestic violence is often anything but - there will be people that think you brought it on yourself. That somehow, somewhere there is something terrible enough you could have said or done (and you know those rumors have already started and are flying fast and furious courtesy of the Internet) that would justify a sound beating.

And that's the beauty of this country. We have that right. You may not choose to press charges. You may even choose to stay with him (took me two "incidents" to finally leave my boyfriend so you'll get no judgment from me.) But you have the option of pursuing legal action. Should you do it?

Many people - who are not in your stilettos - will tell you absolutely. That you must. That you owe it to the other women out there who could be harmed by him in the future or the girls who've taken it in silence from him in the past. I'm telling you that it's hell. It was the worst and hardest thing I've ever done. The court case in its long protracted goriness scarred me worse than the actual assaults did. I regret it even now, five years later.

And yet I wouldn't take it back. I'd do it again if I had to. Whatever you decide to do, all of us who've been there will back you up. It's not an easy choice. I'm not trying to tell you what to do; I just wanted to let you know what you're in for.

PS> I know. I wish Olivia Benson were real too. Then I might actually watch the show.