This letter is posted with permission from Marlene Winell, Ph.D., psychologist.

As a former fundamentalist, I'd like to call you on what you are doing.

This is not about disrespecting your private beliefs. But you have a huge conflict of interest here by running for office and you can't have it both ways (see Jesus' words in John 2:15).

You have not been honest about the most important thing about you: the fact that you are a born-again, literal Bible-believing, fundamentalist Christian.

Most people who have never been entrenched in the subculture of fundamentalist Christianity may not understand what this really means, but I do. Like you, I was raised in the Assemblies of God and I was a zealous part of the Jesus Movement. Like you, my life was consumed with seeking God's will for my life and awaiting the imminent return of Jesus. It's clear to me that you want to do the Lord's will; you've said and done things like a true believer would. You are on a mission from God. If that is not true, then I challenge you to deny it.

Former fundamentalists like me know that your worldview is so encompassing, authoritarian, and powerful that it defines who you think you are, the way you view the world, history, other people, the future, and your place in the world. It defines you far more than hockey mom, wife, woman, hunter, governor, or VP candidate.

You believe that every bit of the Bible is God's perfect word. You have a supernatural view of reality where Satan is a real entity and where good and evil beings are engaged in "spiritual warfare" (Ephesians 6:12). Like Queen Esther, you believe that God has "called" and "anointed" you to lead America. This is why you have accepted blessing for office through the "laying on of hands" and prayer to protect you from witchcraft.

So what does this mean for governing? What could Americans expect with you at the helm?

You cannot affirm basic human decency or capability, because according to your dogma, we are sinful, weak, and dependant on God. And so, your decisions would not be based on expert advice or even your own reasoning, but on your gut-level, intuitive interpretation of God's will. This would allow you to do anything and claim you were led by God.

Your thinking necessarily is black or white. People and policies are either good or bad. After all, Jesus said, "He who is not with me is against me" (Matt. 12:30). Under your leadership, diplomacy and cultural nuance would be less important than not blinking. In a spiritual war, you don't negotiate with the devil.

Regarding social policy, as a believer in individual salvation, you would emphasize individual morality and responsibility, not a community approach with structural solutions. You would be judgmental and controlling of personal choices regarding sex, reproduction, and library books instead of addressing global warming, torture, poverty, and war. Your belief in eternal hell-fire, your deference to a literal Bible despite its cruelties and vengeful god, and your indoctrination to disbelieve your own compassionate instincts, are likely to leave you numb at your moral core. You might recall the verse, "If a man will not work he shall not eat" (2 Thess. 3:10). However, faith-based initiatives would be okay because they would use caring to evangelize.

How about science? As it has in your governorship, your interpretation of the Bible would trump scientific scholarship and findings. You would deny the human role in global warming because God is in control. More importantly, you would not make the environment a priority because you do not expect the earth to last.

International affairs? Since your subculture has identified the establishment of Israel in 1948 as the beginning of the end, you would see war, epidemics, climate change, and natural disasters, all as hopeful signs of Jesus' return. You would be a staunch supporter of Israel and deeply suspicious of countries like Russia identified with the antichrist in the end times literature. (You have publicly said that you expect Jesus to return in your lifetime and that it guides you every day.)

This type of Christianity is not about following the teachings of Christ (as in Matthew 25 on caring for the poor). It is about death -- his death, our death, the death of the planet.

The fundamentalism that has shaped your thinking teaches that working for peace is unbiblical and wrong because peace is not humanly possible without the return of Jesus (1 Thess. 5:2,3). Conflict, even outright war is inevitable, for Jesus came not to bring peace but a sword (Matt: 10:34-37). Like millions of fundamentalist Christians, you may actually find joy in global crises because these things portend His return (Luke 21:28).

But all of this certainty and fantasy in today's complex world is dangerous, Sarah. There was a time when all of humanity thought the world was flat. Today, the stakes for such massive error are much higher.

So I ask you, Sarah, Warrior Princess for God -- How dare you presume to take responsibility for our country and our planet when you, in your own mind, do not consider this home? I mean home for the long haul, not just until your rescue arrives from space. How dare you look forward to Christ's return, leaving your public office empty like a scene from the movie, Left Behind?

What if you are completely wrong and you instead wreak havoc with your policies? If you deny global warming, brand people and countries "evil," support war, and neglect global issues, you can create the apocalypse you are expecting. And as it gets worse and worse, and you look up for redemption, you just may not see it. What then? In that moment, you and all who have shared your delusion may have the most horrifying realization imaginable. And it will be too late. Too late to avoid destruction and too late to apologize to all the people who tried to turn the tide and needed you on board.

And you, John McCain, how dare you endanger all of us for the sake of your politics? How dare you choose a partner who is all symbol and no substance, preying on the fears of millions of Americans? Shame on both of you.

Leave this beautiful, fragile earth to us, the unbelievers in your fantasy. It's the only heaven we have and you have no right to make it a hell.

Marlene Winell is a Bay Area psychologist who specializes in recovery from fundamentalist religion. She is author of Leaving the Fold: A guide for former fundamentalists and others leaving their religion. She is the daughter of Assemblies of God missionaries. A longer article about Sarah Palin's religion is on Dr. Winell's website: www.marlenewinell.net 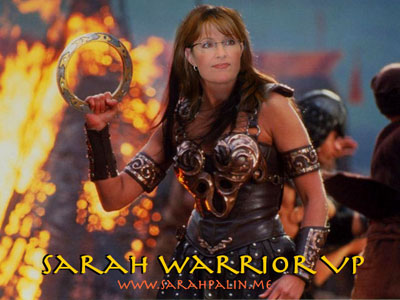