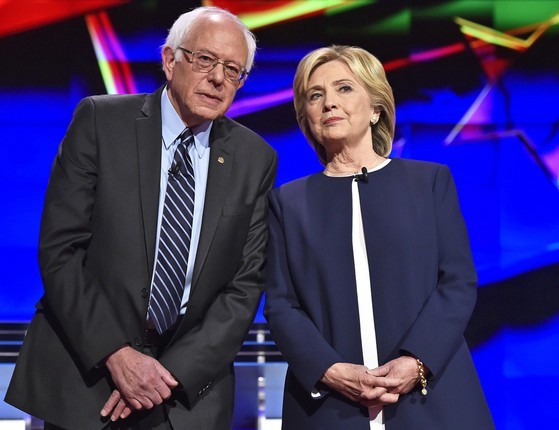 Can we agree to disagree without slurs?

There is pervasive sexism in our society and in our political systems, and we need to change this immediately. We need equal pay for women, more women in elective office, and it's long past time we elect a woman president. I understand and accept that some progressives support Hillary Clinton for president, particularly if the most important issue to them is voting for a woman.

I am ready to vote for a woman president, and I have in the past. Today I would support Elizabeth Warren, Barbara Lee or any other progressive woman candidate for president wholeheartedly.

In fact, if Bernie Sanders and Hillary Clinton were essentially the same on the issues, I would be supporting Hillary even more enthusiastically than I am supporting Bernie.

The thing is, when I look beyond their race, gender and religion, and carefully examine not just their words but their actions, Hillary and Bernie are two very different candidates. They differ sharply on the issues that are most important to me.

For economic justice, racial justice, militarism, reducing money in politics, and fighting climate change, a Hillary Clinton presidency offers, at best, no progress, and at worst, war with Iran, escalation in Syria, deepened influence of corporate money on all political decisions, and another financial catastrophe from an essentially unregulated Wall Street. What I see in Hillary Clinton is a politician who is part of the ruling class, conservative by nature, corrupted by extensive and copious corporate donations, and willing to say nearly anything to get elected.

"What I see in Hillary Clinton is a politician who is ... conservative by nature, corrupted by extensive and copious corporate donations, and willing to say nearly anything to get elected."


Some years only corporate Democrats run for office, and if this were such a year, I might support Clinton in order to at least elect a woman. But the best candidate I've seen in the decades I've been closely watching politics is running for president this year. Bernie Sanders is not perfect, but he is an exceptional candidate on so many issues affecting our country and planet, and I believe he will make a great president.

An additional issue, though by no means the most important, is that Bernie Sanders is polling better against all the Republican candidates and is more likely to win in the general election. A recent poll shows 1 in 6 Republicans already would vote for Bernie over Donald Trump. I believe Bernie polls so well in putative head-to-head matchups because of his honesty and forthright nature, qualities that have helped him win so many elections as an independent in Vermont and that likely will carry him to the White House if he wins the nomination.

I voted and worked for Obama in 2008, and for Jill Stein in 2012. This year I'm enthusiastically supporting the democratic socialist Bernie Sanders for president.

A Pledge and an Invitation

I pledge never to slur you or anyone else based on race or gender or any other personal attribute, regardless of opinion.

Will you agree never to slur me or anyone else based on race, gender, or any other personal attribute, regardless of their opinion?

With respect, and for progress,

Where realism and idealism meet