You were found wandering the streets of rural New Mexico and at least one litter of yours has been born and lost. You were quite likely horribly abused, though nobody could be sure exactly what you had been through. I don't want to imagine. You were so afraid of everything, especially other dogs, that the shelter had to put you through a special experimental training course just to make you somewhat adoptable. When your human finally found you, they told him that they didn't even know how you would react to things like grass and furniture. You were unwanted and high-strung, and he knew you were very near being put down. He decided to take a chance on you anyway.

It was a rough start for the two of you, but after several training classes, one destroyed couch and countless submissive/scared pees later, the two of you were best friends. It wasn't too long before you would have to deal with your first really big change -- when I moved into what had become your home.

You weren't too sure what to think of me, and you hated my camera, which was (is) almost always out and flashing. As we got to know one another, I think you realized that I wasn't here to steal your human away from you, but to be a part of both of your lives. I had wanted a dog for quite some time, and was more than happy to get to know you. We had to get used to one another, though, and it took just a little time for you to warm up for me. I understood. The first human you'd really trusted was the one I had fallen in love with. Fortunately, you decided I was worthy of your human, and it wasn't long before I was referring to you as my dog as well.

Through roommates and other dogs you maintained a nervous curiosity. While not unwelcoming to other animals, you have always been more human-centric. Just before we got married we added a second dog to our little family, and while you clearly love him, you're much more preoccupied with what we're doing than with him. I haven't always appreciated your tendency to obsess over the humans because it felt clingy and irritating -- until now.

When we brought the baby home, you whined (as your breed is wont to do) for almost two weeks. You stared at her and paced, and I could see you wondering what your place would be now. Soon, your pacing became a patrol. As I sat in bed with my infant daughter, you inspected every room of the house before returning to our side, on a cycle that you were convinced ensured our safety. When we offered for you to come and say hello to her, you were so concerned over the fragility of this tiny human that you would only lick the air near her head, while glancing nervously up at us to be sure you weren't overstepping your bounds.

You began to get comfortable with the baby, and it wasn't long before I trusted you enough to lean her against you -- this tiny infant who couldn't even hold her head up, let alone sit up on her own. Your tenderness both surprised me and melted my heart; you were so concerned that you might make a wrong move that you stayed absolutely still. I've never seen a dog remain as motionless as you did. 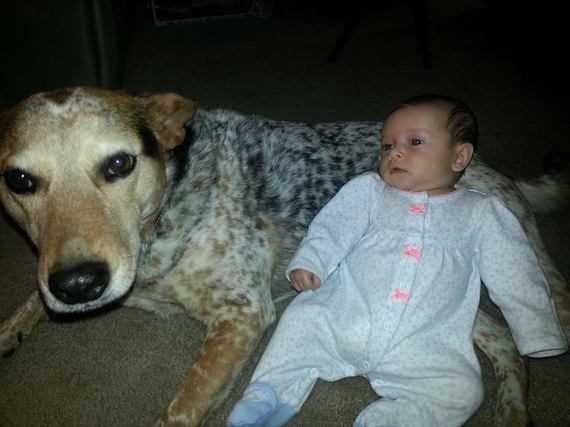 Now we have our routine. You wait for me every morning to tell you that it's alright to say hello to the baby; you give her gentle licks up the side of her face, and a few loving sniffs and snorts along the top of her head, and she coos and stares in fascination at you for a while. You never go far -- your obsession with humans has carried over and multiplied by a thousand to this tiny one, and you will only move more than three feet from her if commanded to do so. Even then, I've caught you waiting for us to be distracted so that you can sneak back over to her. I can already tell that she's just as mesmerized by you, and it's only a matter of time before you're letting her crawl all over you and patiently allowing her to pull on ears and tails.

You've come so far, Gracie. You began as one man's dog, and a rescue that needed a lot of time and patience at that. Now you are the beloved family pet, and we can't imagine life without you. You even tolerate my camera and its incessant flash, and you're included in almost daily pictures with the baby -- your very special human. Never worry about your place, girl. It will always be at the heart of this family.