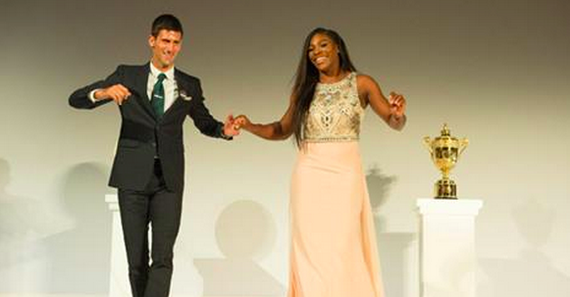 Heads-up: Athleticism is not gendered.

Did I really just read this sentence in an article titled "This is What a Woman Looks Like" This one right here: "Holding her trophy while in a jewel-encrusted dress, Serena reminded us that no one should ever think femininity and athleticism are mutually exclusive."

I am so sick of the scrutinizing of female athletes and whether or not they are feminine, whether they can be both feminine and athletic and all the rest of that tired, sexist, clueless, despicable B.S. As one member of my Facebook community commented sarcastically, "Serena's great, but does she hold up under the male gaze?"

New York Times sportswriter Ben Rothenberg apparently shares this concern. He has been raked over the coals for this widely criticized article focusing on Serena Williams' body image in a way that furthers the body hatred so many women experience, right as Williams was triumphing at Wimbledon.

Do we fret about the imagined body image woes of the greatest male athletes of all time? Do we discuss whether guys can be both handsome and athletic? Both masculine and athletic? Hell no, friends, because athleticism is constantly framed by the default male gender, where it can exist for men free of stereotyped limitations.

If I say the word "athlete," an image will pop up in your mind. Dollars to donuts that image is male. When female athletes are powerful, tough fighters, sweaty or bloody, or just simply muscular, the media reduces them to animal-like caricatures, as if attempting to shame them into their proper place as ladies.

God bless all our famous male athletes, s̶a̶c̶r̶i̶f̶i̶c̶i̶n̶g̶ ̶t̶h̶e̶i̶r̶ ̶m̶a̶s̶c̶u̶l̶i̶n̶i̶t̶y̶ getting out there and "just doing it" in pursuit of their dreams. Whether they are winning national titles or Olympic medals, in roll the accolades and the high salaries and the prize money and the endorsement dollars.

That last thing? Not deeply dependent on their physical attractiveness or race. I know, go ahead, I know you want to. Toss out some examples of good-looking white male athletes raking it in. I'm not saying that doesn't happen. Sure it does, but so many other factors weigh more heavily for the guys. If I ask you for examples of average-looking white male athletes or black male athletes pulling down millions in endorsements, you'll have tons of those examples as well--many more, relatively speaking, than on the female side of the equation.

Here's the thing--we all have bodies that do things, not just men. I know it's hard to see past the obsessively ornamental presentation of female bodies in the media, even those of female athletes, but female bodies don't just pose. They don't just decorate the world. If they are athletic, they often don't succeed without strong and prominent muscles. They run and jump and sweat and even bleed. Don't try to reconcile that with femininity--that is femininity, because femininity is many things. It needs no justification. It needs no explanation. It needs no reinvention. Just let it be.

So now we understand each other? Good. Next!