When I arrived home from church last night, I was shocked to see that the sink wasn't cluttered with plates crusted in ketchup or cups stained with sour organic chocolate milk.

I began to wonder where the dishes that I had left in the sink only hours before had vanished. Had they been stolen? Had they grown bacteria legs or propped themselves upon forks and run away? I looked around the kitchen and then cautiously and skeptically opened the dishwasher.

I was so pleasantly surprised to see the dishes there, although plates were haphazardly stacked where the cups should go and Tupperware was on the bottom rack where it would surely melt into the shape of a puzzle piece.

But I didn't complain.

Although you didn't actually wash the crusted ketchup from the plates or rinse the soured hormone-free delicacy from the cups before loading them, you did however, wash MOST of the larger clumps of food down the garbage disposal. I'm so thankful for that, because the mere sight of a wet crouton makes me want to projectile vomit. The mere touch of damp wheat has a similar effect on me as water and midnight snacks have on Gizmo the Mogwai.

As I rearranged the casserole dishes inside the dishwasher so that water would actually come in contact with them instead of being diverted by a cookie sheet covered in macadamia nut crumbs, I remembered that when I had left for church hours earlier, the sink was full of dirty dishes and the dishwasher was fully loaded with clean dishes.

So where had the clean dishes gone?

I slowly opened select cupboard doors and saw that they had been put away.

Sweet stranger, you did the best you could. We've lived in this house for six years, but you had no way of knowing that colanders go beneath the island or skillets go in the big drawer on the left. How could you have known where I keep my Crock Pot? I will excuse you for throwing it on top of my glass cake plate.

You did the best you could, mysterious stranger.

No, you didn't go about the entire process known as "dishes" as I would, but I am certainly not complaining. I'm not some control freak who spazzes out over knives in the fork slot or cups turned right-side up so that they will catch 1/2 gallon of water while washing. No, that would be ludacris.

You did the best you could, mysterious stranger.

And for that, I am truly thankful. 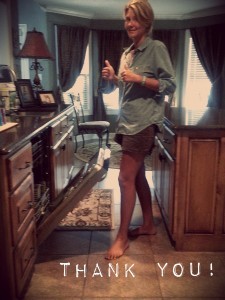