Facebook, Google, Microsoft: Here's why you should follow Apple's lead in not supporting the GOP Convention in Cleveland this July.

If you're new to the Bay Area, if you work in San Francisco or in Silicon Valley, you may not realize it, but you're here because of the Beat Generation.

At the Beat Museum in North Beach, one of the things we hear every day, from visitors from all over the world is, "This is such a great environment! The people in this town are so welcoming and friendly! This is definitely our favorite city in the USA!" It's their favorite city because of the Beat Generation.

The Beat Generation is a subset of the generation Tom Brokaw dubbed "The Greatest Generation" -- those born circa-1920, who grew up during the Great Depression of the 1930s, came of age during World War II in the 1940s, and in the 1950s, changed the world.

The Beats were creative intellectuals, writers, poets, artists, performers; the restless, the wayward, the disillusioned, the forward-thinking. They were the non-conformists of their day, and they influenced everyone, from Bob Dylan and The Beatles onward. Every era has its dissidents, its outlaws. Every civilization, since well before the Greeks and Romans, has its non-conformists; the ones who question the status-quo, who challenge the social order, and leave society the better for it.

Amidst the stifling social climate of the 1950s, which demanded conformity, nationalism, enforced racial and economic segregation, and repressed anyone whose lifestyle didn't aspire to the status-quo, the Beat Generation practiced a philosophy of compassion, sympathy and tolerance. The Beats understood that living an authentic life on one's own terms means respecting and celebrating the differences of others. The Beats embraced the values of racial equality, gender equality and the freedom of LGBT people to be themselves. "America I'm putting my queer shoulder to the wheel," Allen Ginsberg wrote in 1955, offering that even those whom society deems outcasts, like himself, are doing the hard work toward everyone's betterment. The Beats, Gary Snyder and Michael McClure especially, were also vocal about the need to protect and preserve the natural environment.

The fact that most millennials regard these values as basic truths is proof that we're living in the kind of world the Beat Generation sought to create. 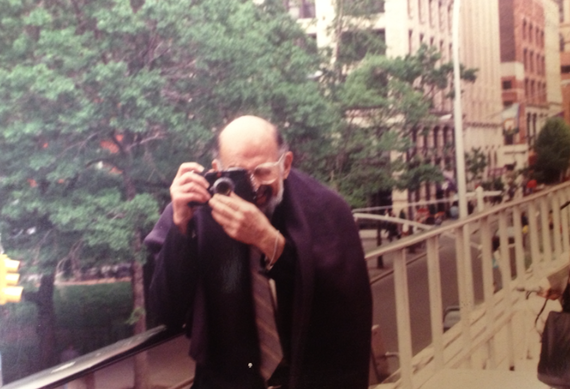 On January 14th, 1967, "The Human Be-In" was held in Golden Gate Park. Allen Ginsberg, Lawrence Ferlinghetti, Michael McClure, Lenore Kandel, Timothy Leary, Richard Alpert (Ram Dass) and Jerry Rubin -- among many, many others -- attended. Beat poets took the stage to read poetry, followed by bands such as The Grateful Dead and The Jefferson Airplane. The Human Be-In represented a passing of the torch from the elder Beats to the next generation, who would become the counterculture of the 1960s -- the hippies, yippees, the anti-war movement, etc.

Steve Jobs attended Reed College in Portland, the same college where Beat poets Gary Snyder, Lew Welch and Philip Whalen studied two decades prior. In 1974, before founding Apple Computer, Jobs took a trip to India, much like Gary Snyder and Allen Ginsberg did in the late 1950s. In his backpack, according to Daniel Kotke, Jobs' roommate at Reed, who accompanied him on that journey, was a copy of Kerouac's The Dharma Bums, the novel that introduced Zen Buddhism to America. Over 20 years later, Apple's iconic "Think Different" advertising campaign ("Here's to the crazy ones...") contained obvious echoes to writings of Kerouac and others.

In 2008, when Facebook's Mark Zuckerberg sought advice from Steve Jobs on how he could refocus his young and rapidly evolving company, Jobs suggested he take a trip to India and visit the Kainchi Dham Ashram, as Jobs had done himself 30 years prior.

The Burning Man festival, one of the defining cultural institutions of our time, draws clear inspiration from the Beat and the Hippie subcultures, and has drawn myriad comparisons to Woodstock, the Human Be-In -- historic occasions that set the tone for their time.

Tech companies are leading the way in 2016. A good portion of today's workforce and consumer base are Millennials, and their thoughts, their values matter for the future. Millennials believe in authenticity, and that success in business should be more than just financial performance -- that doing good, and having a positive impact on society are of critical importance. Millennials grew up with a team mentality that embraces diversity, inviting everyone to join and collaborate while doing work that matters.

If you're a young person working in tech, if you came here to do great things, to create and innovate brilliant new tools and solutions, you're following directly in the footsteps of the Beat Generation. For as long as anyone can remember, people have come to San Francisco to do new and interesting things, to live their dreams, to push the boundaries and change the world.

Donald Trump Does Not Represent Your Values

Whatever tech company you might work for, Donald Trump is the antithesis of everything you believe in. Technology is about connecting people, bringing people together, improving the way we communicate, because the better we build communities, the better we understand one another. Donald Trump is about dividing people through dog-whistle politics, cynically preying upon fear, anger, prejudice, and misogyny.

The Beat Generation represented everything positive that came out of the 1950s. Theirs was a message of optimism: that the kind of world we want to live in can be ours. Donald Trump wants to drag us backward, toward everything negative about the 1950s and 60s -- racism, suspicion, conformity, and xenophobia -- everything we and our forebears fought to rise above.

This isn't really about politics. This is about doing the right thing. Behaviors have consequences. Language has consequences -- and that's why we're asking you to do the right thing -- to take Apple's lead in refusing to support the Republican Convention this July in Cleveland, so long as Donald Trump remains the presumptive nominee.

You can learn more by visiting
The Beat Museum
540 Broadway
San Francisco, CA 94133
Open 7 days a week, 10am - 7pm
You can also visit kerouac.com

Founder and curator, The Beat Museum